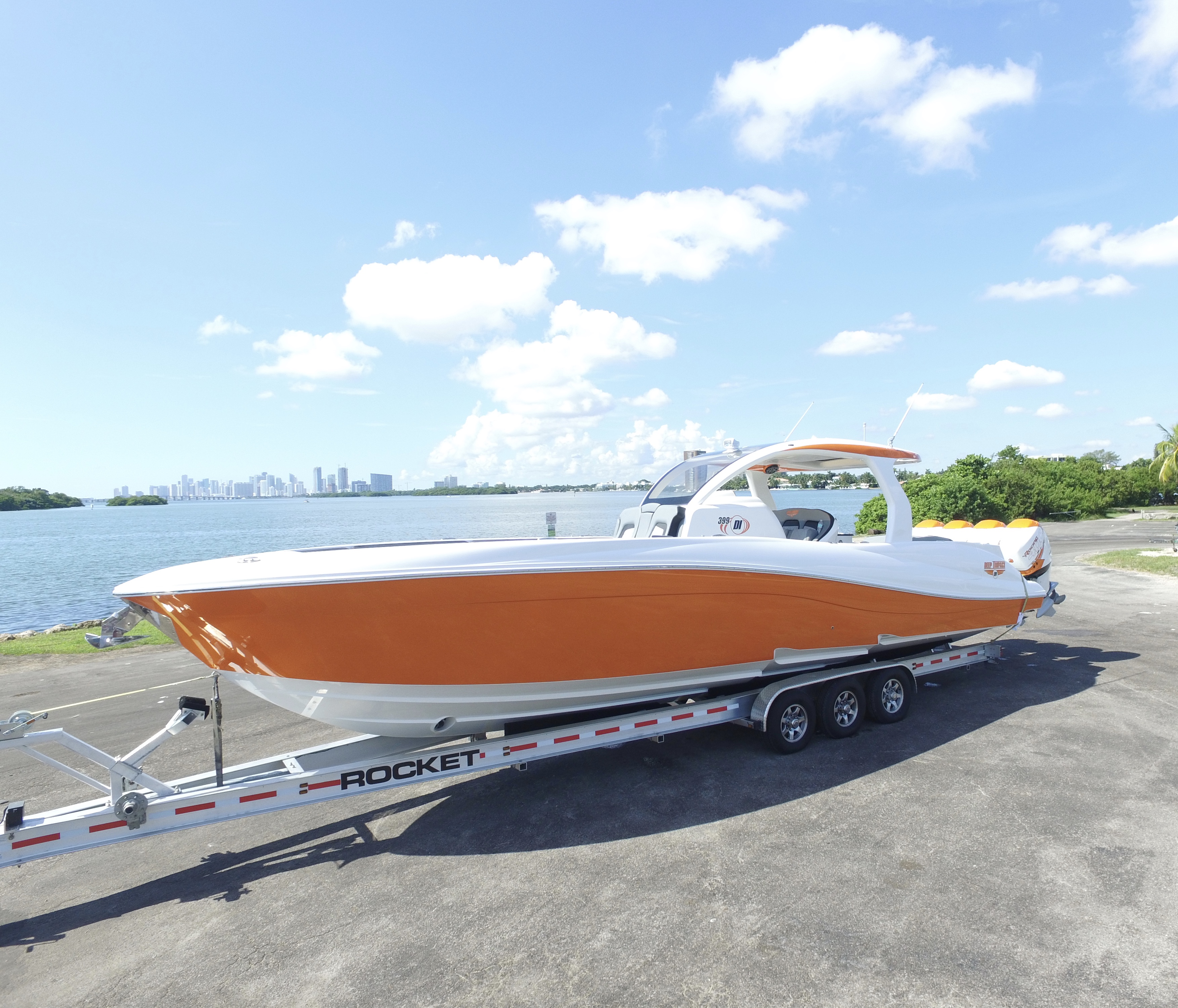 While the most obvious new feature of the Deep Impact 399 Sport is its top, the builder also reworked the console inside and out.

Mark Fischer, the owner of Boats Direct USA in Miami, Fla., had at least one thing going for him when he acquired the assets of Deep Impact Boats two years ago. The proven hull for its existing 39-foot performance center console needed no improvement. But that didn’t stop Fischer and his crew from pushing to improve the 399 Sport in other areas. And between now and the end of the year, 39-footer will be going public.

The new 399 Sport center console now boasts lounge seating—complete with flip-up armrests—ahead of the console, as well as a fully air-conditioned cabin with a head locker within it. (In the prior model, the entire cabin, which has been expanded, served as a head locker and stowage space.) Deep Impact also reconfigured the boat’s helm station with a large dash that holds two Garmin 8617 and two smaller Garmin units, all networked via NMEA 2000 technology for total touch-screen operation, and new fold-down/leaning post seating.

But the most immediately obvious addition to the new Deep Impact 399 Sport is its gunwale-to-gunwale patented fiberglass hardtop, which has an aluminum inner structure. The rear section of the top even includes a built-in shower. 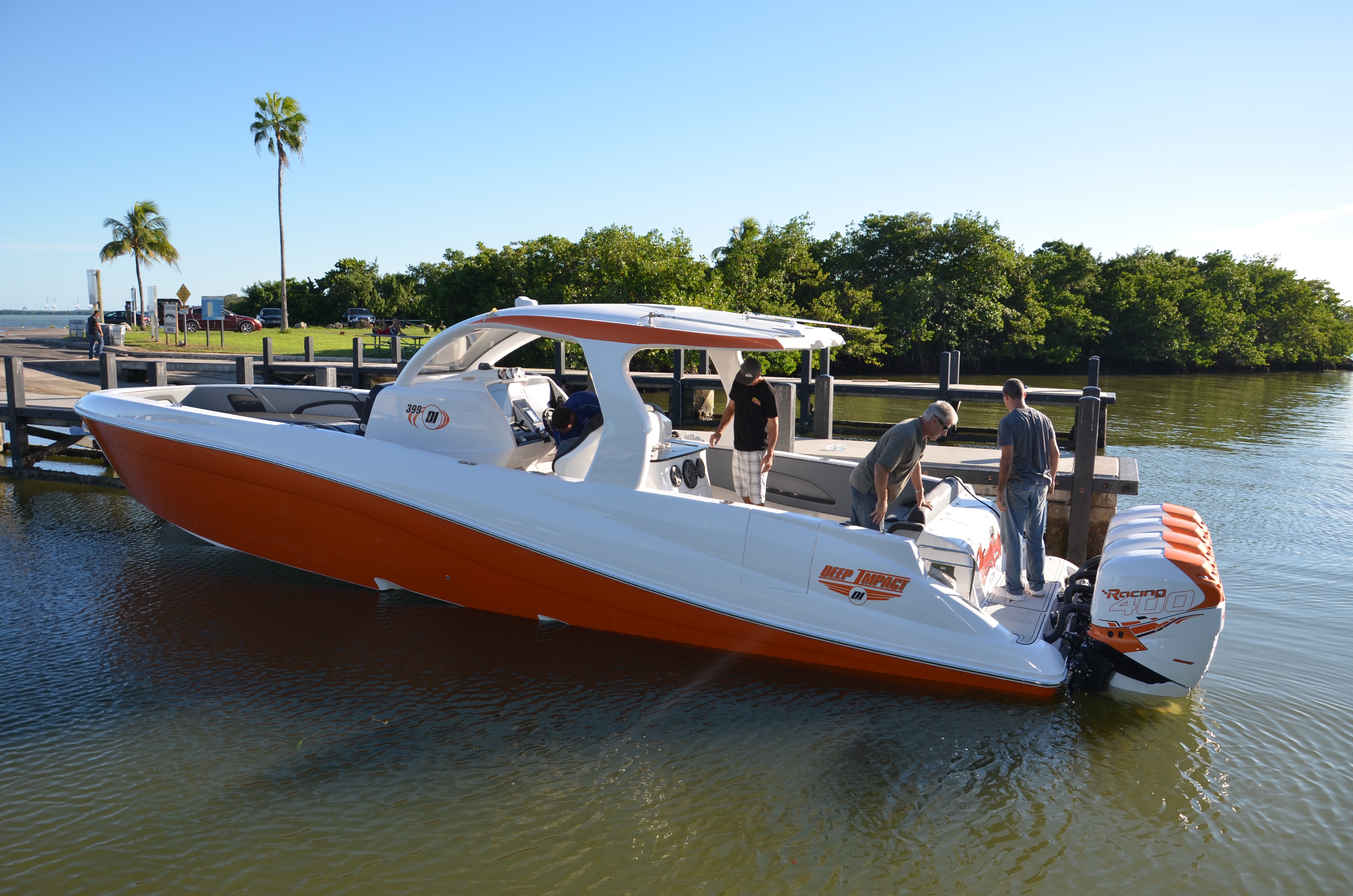 “With the new top design, we wanted something unique,” said Randy Truesdale of Deep Impact. “So we designed an aerodynamic, back-sloping top with a fixed windshield and two ‘panoramic roofs’ that allow for sunlight but don’t scorch you while you’re at the console. The fit and finish was what we wanted to achieve.”

Sold long before they were completed, the first two 399 Sport center consoles—the first sea-trialed last week and the second should hit the water this week—are equipped with quad Mercury Racing Verado 400R outboard engines on jack plates from Bob’s Machine Shop. Deep Impact equipped both boats with those plates to make the outboard height adjustable for setup purposes—future models likely won’t have that hardware addition.

“That was with 100 gallons of fuel, shop props and seven people on board,” he said. “We normally wouldn’t have that many passengers for our first sea trial, but everyone was so excited when the boat was done that they wanted to go.

“Honestly, I would have been in awe to see the boat break the 80-mph mark—I was expecting 76 to 78 mph,” he continued. “Mercury Racing is going to come down to help us dial it in even more.”

Fischer said the new windshield did its job exceptionally well. “I couldn’t believe we were going almost 85 mph,” he said. “There was no wind at all behind the console.

“The boat was very impressive,” he added. “The handling, the ride and the speed were great.”

While most 399 Sport models will come with triple and quad Verado 400R outboards, the next one will be powered by a trio of 350-hp Yamaha outboards and be used as a yacht tender. Hull No. 4 will be a “cabin boat” with a full cabin all the way forward. (In that model, the console will house only the head locker.)

In a less obvious move, Deep Impact eliminated the generator from the 399 Sport and replaced it with 110-volt power through an inverter system with four additional batteries.

Next in line for updating—the first was built for Fischer—is the company’s 36-footer called the 360 Super Sport. According to Truesdale, that model only will be offered with triple outboards.

But that’s a bit down the line for Deep Impact. Right now, everyone involved is buzzing with the release of their new 39-foot beauty. The first boat will make its boat show debut at the annual Fort Lauderdale, Fla., event in early November and will join the fleet for the Florida Powerboat Club’s Key West Poker Run, where it also will be on display at the docks behind the Conch Republic restaurant near the FPC’s Poker Run Village.

“We’re really happy with the finished product,” said Truesdale. “And we’re looking forward to showing it off.”