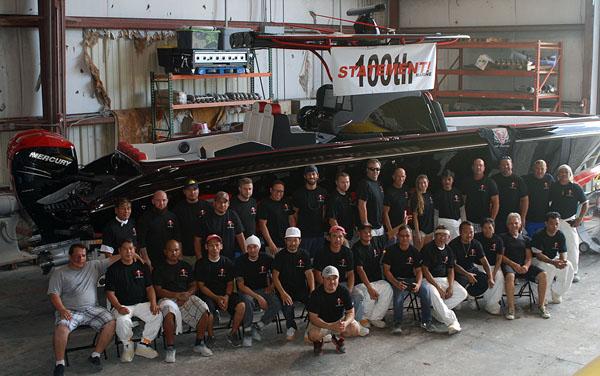 From the day I met Nick Buis and Todd Werner, the owners of Statement Marine in St. Petersburg, Fla., at a Powerboat magazine test in Fort Myers, Fla., in late 2008, they were quite clear about their intentions in the performance boat marketplace: to make a statement. That’s why they named the company Statement Marine.

That’s also why they showed up to the docks with a state-of-the-art 42-foot V-bottom with an air-suspension cockpit and luxury emanating from the boat’s lines and paint job as well as its lavishly appointed cockpit. The boat made a statement all right. So did the company’s turbine-powered 50-foot catamaran, which was on the cover of Powerboat magazine’s second-to-last-issue in 2011.

A decade later—the company’s official 10-year anniversary was several weeks ago—and they’re still making a statement, there’s no denying that. The interesting thing is neither Buis nor Werner would have predicted that they’d be making their statement with a hot line of luxury performance center consoles. But that’s where the market has taken them, and they’ve appeared to make all the right moves to improve their product line and their market share, which is why the company’s 100th center console left the Statement factory not long after an anniversary celebration held at the facility at the end of July.

The company proudly displayed this banner during its celebration recognizing its 10-year anniversary and 100th center console built.

So far they’re doing it with two primary models, a 35-footer and a 38-footer, that can be configured in various ways depending on power, seating, lounges, dash design, arch options and much more. But there’s more to come, that according to the ever-courteous Craig Barrie, who has been essential to the growth of Statement since he joined the team almost five years ago.

“We’re planning to go into the bigger boat market soon, primarily so we can have a four-engine model for our customers who have asked us to build a quad-engine boat,” Barrie said. “What we have is a great 35 that gets people started and a great 38 that can be built with a budget in mind or loaded with all of the bells and whistles. We’ve been pleased with the market we’re in and the great amount of customers—and dealers—we’ve had come on board over the years.

“It doesn’t surprise me though,” he continued. “Center consoles aren’t new—heck we built a 33-footer back in the early ’90s at Cigarette Racing Team. We didn’t sell a lot but I bet we built more than a dozen of them. Later on at Donzi when I got there and they were building their 38 ZX, it was clear to me that there was a market for center consoles for the performance guys. The first one we did that was painted and outfitted more like a performance boat, not a fish boat, we displayed at the Miami International Boat Show and it sold the first day.”

The 42 Ultimate was the boat that started it all for Statement Marine.

Barrie gives a lot of credit to the engine builders—Mercury Marine, Mercury Racing, Yamaha, Suzuki, Seven Marine and others—for creating the engines that, simply put, make the center console boats run, and run with little to no problems.

He also credits the many other builders, or competitors if you will, for continuing to push the center console market forward.

“This market is strong and it doesn’t seem be slowing down,” Barrie said. “There are some beautiful boats out there. Scout builds an incredible boat, so does Cigarette, MTI, Nor-Tech and others. They’re all so cool. And it all continues to evolve, the power and the boats. I mean we’re talking 35s, 38s, 42s, 45s and even 56- and 57-footers—when’s it going to stop?”

Not that Barrie or anyone at Statement is in a hurry for it to stop. In fact they can’t wait to see what the market is like once they hit their 20th anniversary.