You are at:Home»Awesome»Fireworks Over Water 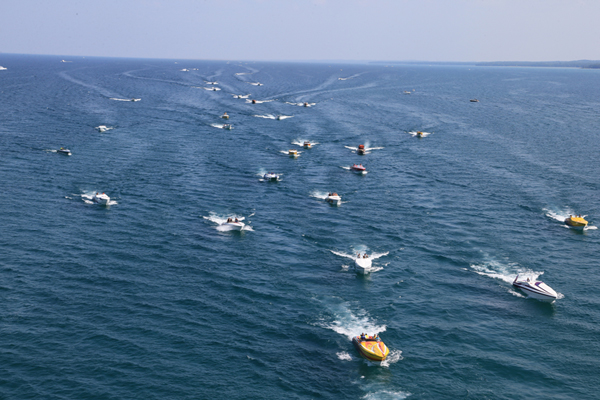 Today’s Boyne City, Mich., July 4 fireworks celebration over Lake Charlevoix is scheduled to start at 10:30 p.m., which is a bit later than I’m used to for the pyrotechnic tradition. But I’m from Northern California and this is Northern Michigan, and it gets dark about an hour later here. So the later start makes sense.

I’m here, of course, to cover this coming weekend’s Boyne Thunder Poker Run as the final leg of a 17-day road-trip that began in Erie, Pa., via Cleveland—where the city was already gearing up to celebrate Independence Day—to cover the Erie Poker Run. From there I headed to a wine dinner—my girlfriend is in the wine business and invited me to join her—in Fort Wayne, Ind., where the talk among our hosts was an annual July 4 party on the shores of Lake Wawasee highlighted, of course, by a fireworks display.

The next stop was Evanston, Ill., to visit family, where the Independence Day celebration plans were all about catching the annual July 4 parade on Main Street and fireworks over Lake Michigan. On our way to dinner in Chicago the day before we left for Michigan, I watched the owner of a red-and-white Cigarette 38’ Top Gun and his friends create some fireworks of their own on the lake’s evening glass.

During Sunday’s six-plus-hour drive to Boyne City (that “Restore I-94” project in Northern Indiana is a real hoot) we saw hundreds of American flags displayed—planted on front lawns, hanging from construction cranes, stuck in the backs of RV windows. Had we been interested, we could have stopped every 10 miles or so to buy some fireworks of our own to set off tonight. But I confess, I’m a California chicken—fireworks worth lighting are mostly illegal back home—and I need all of my fingers on the keyboard to make a living.

All of this—of course—got me thinking. Is there anything more quintessentially American than watching July 4 fireworks light up the sky over the water?

I grew up in a Southern California beach town, and when I was a kid July 4 fireworks were one of the highlights of my summer, at least when we could see them as California’s “June Gloom” coastal fog can extend through the middle of July. (For that reason, watching Independence Day fireworks off Half Moon Bay, Calif., about 30 minutes from my current home, is an exercise in “Blue cloud. Red cloud. Green Cloud. Boom.”) I’ve watched them above waterways across the country, from the rocky shores of California’s Lake Tahoe to the sandy beaches of New York’s Long Island.

And tonight I get to watch them over Lake Charlevoix with my love.

Is that a privilege? You bet your life it is, as others have wagered—and sometimes lost—their lives to preserve that privilege.

There is nothing I can write about the deeper meaning of tonight’s July 4 fireworks celebration that hasn’t already been written with greater eloquence. But what I can do, as I have since I was a child, is enjoy—with the understanding and appreciation that comes with being an adult—the show in the sky above the water.