You are at:Home»Awesome»Harris Performance Rolling 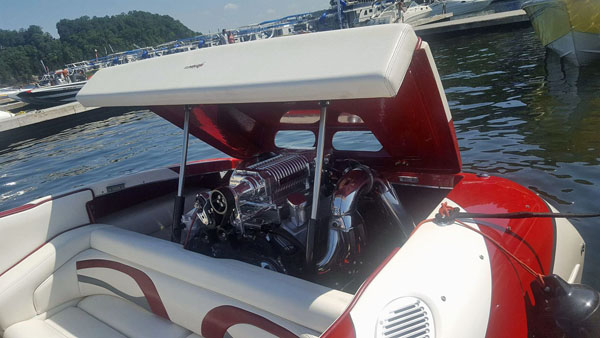 A Harris Performance LLC project, this Eliminator 25 Daytona catamaran will compete in the 2018 Lake of the Ozarks Shootout.

True confession: I was trying to reach veteran offshore racer Jeff Harris, the throttleman for the 2016 Super Boat International Unlimited Class World Champion Wake Effects team, when I first connected in early 2017 with Jeff Harris, the 36-year-old owner of Harris Performance LLC in Dadeville, Ala. That kind of thing happens often to the Alabama-based full-service engine building and rigging company owner, and he actually has come to appreciate and enjoy it.

“I do get a lot of perks from that,” he said, then chuckled. “People call me by mistake and they’ll say, ‘Well, now that I have you on the phone, I do need some work done or some parts.’ I talk to Bob Teague of Teague Custom Marine a lot, and every time I call him he says, ‘Is the racer Jeff Harris or the redneck Jeff Harris?’

Inspired by his father’s street rod business, Harris started his company 12 years ago. He loved fast cars but was less than enamored with speed limits and such.

“I grew around cars,” he said. “But I wanted to go fast. My father, Mickey, and I butted heads on a lot of stuff and, honestly, I was having trouble on the street because I always wanted to go fast. But there was this huge 44,000-acre lake, Lake Martin, that we lived on and at that time there were no restrictions. We could go as fast as wanted. So I decided to goof around with boats. One thing led to another, and we have this business.”

Around the same time Harris was getting started in the marine business, powerboats 27 feet and longer were banned from operating on Lake Martin. But that didn’t stop him from continuing to focus on the high-performance marine market. In addition to adding outsourced paint, fiberglass repair and upholstery services to his business, he became an IMCO Marine dealer and currently is the company’s No. 7 dealer in the country. Harris Performance has reached the point where “99 percent” of its work is in the high-performance realm.

“We don’t take any ‘normal’ powerboat work anymore,” he said. “If someone calls with a Chaparral or something like that, we’ll refer them to someone else.”

At present, Harris Performance has 25 projects—including three 38-foot Hustler V-bottoms—from as far away as Seattle and a close as Lexington, Ky., in the works. They range from complete repower to simple repair jobs. 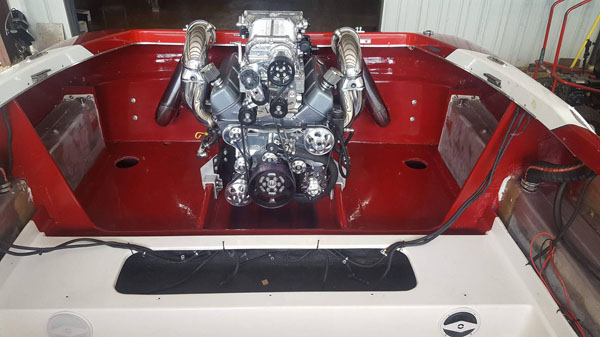 Said Eliminator 24 owner/Harris Performance customer Jeff Ortowski, “It was one of those projects that kept growing and growing—and it couldn’t have happened with a better guy.”

Among the boats currently at the shop is a 2005 Eliminator 24 Daytona owned by Jeff Ortowski of Rockford, Mich. Back at the shop for transom repair and reinforcement, the 24-foot catamaran was repowered and re-rigged by Harris this year and delivered to Ortowski during the Lake Cumberland Poker Run in Kentucky.

Harris replaced the boat’s existing 800-hp engine with an in-house built 1,100-hp Whipple supercharged, 598-cubic-inch engine. Using custom fabricated engine mounts, Harris raised the engine three inches so it could properly align with its existing IMCO SCX4 drive. Of course, that was after the boat’s bilge had been completely refinished. Then he completely re-rigged the 24-footer.

The entire project took nine months, which was significantly longer than originally anticipated. But the customer was delighted with the outcome.

“It was one of those projects that kept growing and growing—and it couldn’t have happened with a better guy than Jeff,” said Ortowski, who plans to run the cat in the 2018 Lake of the Ozarks Shootout in Central Missouri. “I originally contacted him about doing something. I went in a different direction, and it bit me. I decided to re-rig the boat. Originally, I had no intention of repowering it.

“Absolutely, Jeff is one of the best guys in the business, especially when it comes to being brutally honest and making you feel comfortable,” he continued. “I couldn’t be happier doing business with him. His customer service is second to none.”

The transom repair gave the Ortowski the opportunity to send his drive to Wilson Custom Marine for blueprinting. Once the drive is reinstalled on the bolstered transom and the engine is reinstalled, the boat will be transported to ace fiberglass man Dave (best known as “Glass Dave” in high-performance powerboating community) Sikorski’s shop in the Toledo, Ohio, area by Valentine’s Day, where it will be outfitted with a new custom-fabricated engine hatch painted by the famed Michigan-based Mitcher T Custom Painting and Design shop.

Though Harris said he’s happy with where his business, which includes a complete dynamometer cell, is at the moment, is now he’d like to expand it and to that end is working with an investor. His goals include adding an in-house machine shop in the next few years. In the nearer future, he’d also like his company to become a certified Mercury Racing warranty and service center.

In the more distant future, he’s interested in adding a showroom and becoming a dealer for a “major” high-performance powerboat brand such as Skater or MTI.

“I would like to bring more services in-house and I’d like our business to become more streamlined,” said Harris. “Of course, we want to expand and grow. This is the only business I know, so it’s kind of hard to explain where I want to go because we’re naturally going to go there.”