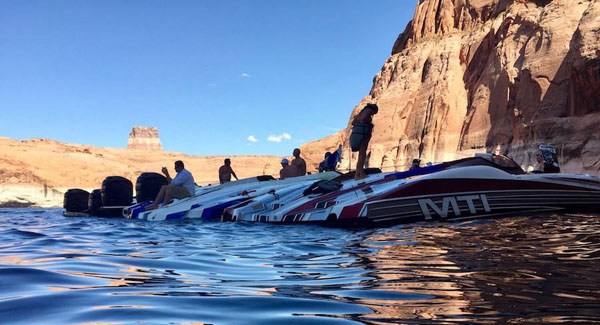 The MTI presence at the Lake Powell Challenge in mid-September was almost as impressive the scenery.

It was only a few weeks ago when I was interviewing Randy Scism, the founder and owner of Marine Technology Inc., in Wentzville, Mo., about his first trip to the picturesque Colorado River-fed Lake Powell, which borders Arizona and Utah.

Scism traveled to Page, Ariz., home of Antelope Point Marina, to run one of the company’s 340X catamarans and join several MTI customers, including George and Shannon Argyros, Brett and Sheila Baur, and Jake and Gina Nossaman, in the ninth annual Lake Powell Challenge.

Needless to say he was blown away. Not only did Scism have the time of his life boating on the out-of-this-world waterway, he also witnessed an incredible amount of generosity as the event raised $500,000 for the Utah-based Mountain Valley Chapter of JDRF (read the story here). 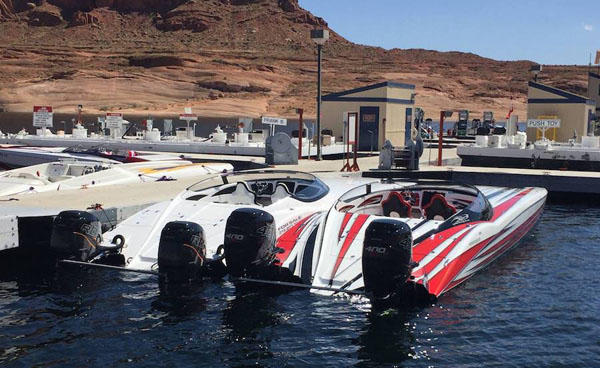 MTI brought a pair of 340X catamarans to the event on Lake Powell.

“The Lake Powell Challenge offered some different boating than we’re used to,” said Scism, who travels to many events beyond his hometown lake—Missouri’s Lake of the Ozarks—including some in the Florida Keys, Texas, Georgia, Louisiana, Tennessee and even Lake Havasu City, Ariz., where he’s attended the Desert Storm Poker Run almost regularly for the past decade. “There was so much lake to explore. It’s such a beautiful place. I can’t compare it to anything else.”

He most definitely won’t try to compare it to Lake Havasu, the Colorado River-fed lake to the south. He did, however, just get back from the popular lake for the annual Monster Storm Poker Run held at the Nautical Beachfront Resort, and he didn’t hesitate to compare the mid-October event to the springtime Desert Storm Poker Run.

“We had such a great time at Monster Storm,” Scism said. “The event is much more laid back than Desert Storm. It’s not too crowded so you can actually visit with people. It was a hoot to see everyone in their outfits, too. There were some hilarious ones. We were impressed with the creativity and effort people put into their costumes.

“From a business standpoint, that’s probably the best we’ve done out in Havasu in a long time,” he continued. “We sold the first 340X (the demo model with the Mercury Racing Verado 400R engines) and we came home with several leads that should turn into at least two sales.”

Scism, who enjoys socializing with his customers, said he’s been able to extend some of the acquaintance relationships he’s developed from Desert Storm into friendships following the two events. And not just with people who own MTIs. 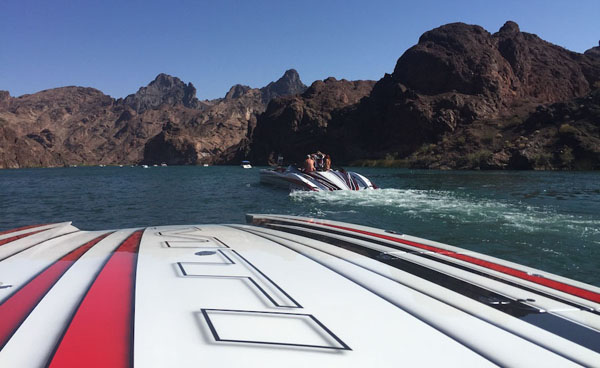 At Monster Storm, Scism also got to showcase the company’s 40-foot cat powered by twin Mercury Racing 1100 engines that recently went up for sale (see the OSO Classified listing) because the boat’s owner is purchasing a larger cat from MTI.

“It was cool to have Randy Scism and the team at MTI with us in Lake Powell and Lake Havasu this year,” said Utah’s Brett Baur, who owns a 48-foot cat that he purchased last winter and had MTI redo its paint and interior. “You don’t always get to hang with the head guy himself. Between both events we were able to get to know Randy and his wife, Cherell, so much better. Poor Tim (Gallagher, MTI’s sales and marketing director) is always working so he doesn’t get to relax too much, but we really have a great time with those guys. Having their support to look over the boat, tie up at the docks, clean up and more is so nice. The little extra attention goes a long way.”

And so far the extra attention MTI has paid to the West Coast seems to be paying off.