You are at:Home»Awesome»Poker Runs, Weather or Not

Things weren’t looking great for the Pennsylvania-based Erie Poker Run last Friday as light rain fell on the boats parked on their trailers in front of the Sheraton Bayfront Hotel. Convinced that that the rain would continue as forecasted throughout the weekend, most participants opted to keep their boats out of the water and start the Friday dock party early. And—by all accounts—party they did.

But come Saturday morning, the rain stopped, the skies partially cleared and the poker run was on. The participants, save for a few worn out by the previous night’s antics, scrambled to get their boats in the water and off they went for the most successful run on Lake Erie in the event’s four-year history. 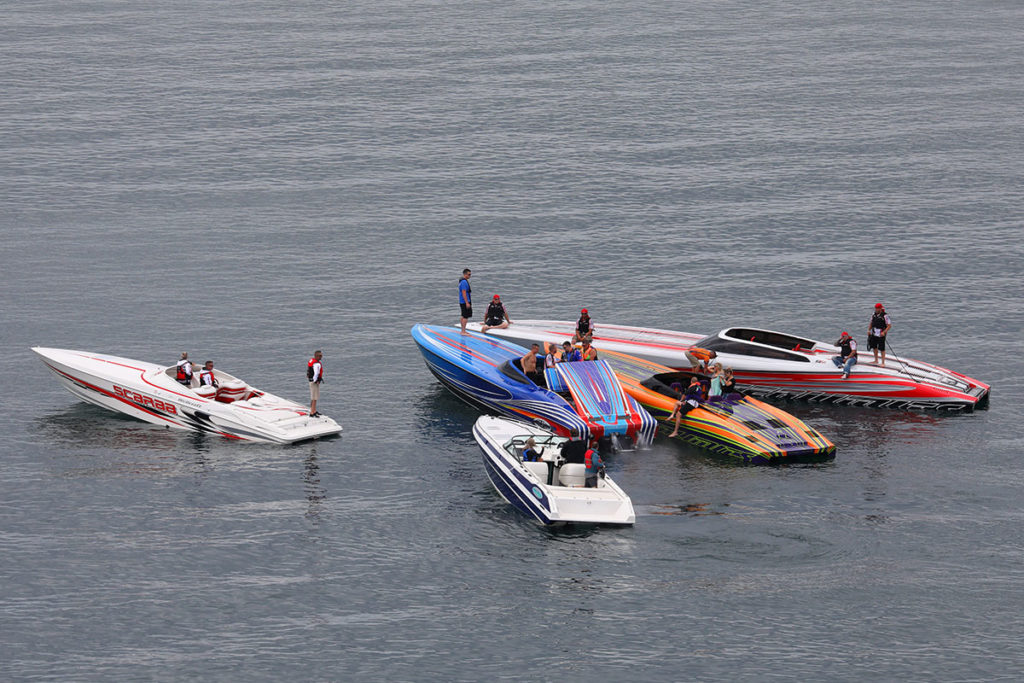 The weather forecast called for rain and rough water throughout last weekend’s Erie Poker Run, but it didn’t turn out that way. Photo by Jeff Helmkamp.

The moral of the story? They made the best of what they had. And weather forecasts being what they are—forecasts—the story ended happily.

In a way, they had no choice. Poker run organizers— and I checked with Stu Jones of the Florida Powerboat Club, Bob Alger of the Boyne Thunder Poker Run, Jeff Morgan of the 1,000 Islands Charity Poker Run, Chad Collier of the Old Hickory Fun Run, Raft-Up and Bar Crawl, Shannon Radtke of the Four Horsemen Poker Run and, of course, Erie Poker Run organizer Anthony Scioli—don’t offer weather-based refunds to participants.

And why would they? They’re on the hook for hotel room blocks. They pay in advance for lunch during their poker runs and the dinners following them. To secure those arrangements, they need accurate head counts. And those are just a few of the advance expenses they incur.

In other words, cancel three weeks or less before Boyne Thunder and you’re out of luck if you want your money back.

Jones of the Florida Powerboat Club, which produces the most poker runs of any organizer in the country, said he’s never had to a cancel an event. But he does have a policy in place: no refunds.

“Credits will apply in some situations,” he said. “If weather prevents a boating trip, we’ll often drive or fly as an alternative. Most hotels will not give refunds unless the weather event is a ‘named’ tropical storm or hurricane.

“But we have never cancelled an event for weather for as long as I can remember,” he said. “Five years ago during the Emerald Coast event, severe rain made the Coast Guard force us to cancel the boating aspect. But we had already run the boats on Friday, so we played out all the poker run cards and did all the parties on Saturday. And we even got in a fun run on Sunday.”

Collier, who has faced weather issues several times with his event annual event outside of Nashville, also doesn’t offer refunds.

“We make the best of it,” he said. “In Nashville, we had debris in the water a couple of years ago and the run was only five or six miles. We rafted up, partied like rock stars and made the best of it.”

Though they’re worth revisiting, none of these policies are unfair, much less harsh. They simply reflect the financial realities of being of being a poker-run organizer who, like his or her customers, has no control over the weather.

With the 2018 poker-run season rolling and crazy summer weather rolling with it, there’s no question that more events will face adverse conditions. But know that if you decide to bail on a poker run based on weather or a weather forecast—and you certainly have that choice—you won’t get your money back.

But if you do decide to show up and make the best of it, you never know how it’s going to turn out. Just ask Scioli and the participants of last weekend’s Erie Poker Run.