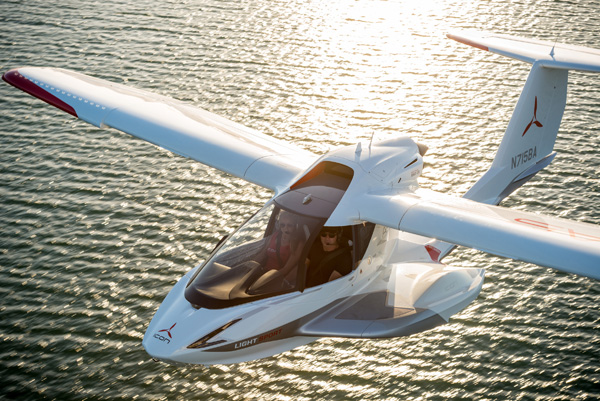 As evidenced by the Florida Powerboat Club’s annual Land, Air and Sea Poker Run to Key West, more than a few folks who own and drive high-performance catamarans, V-bottoms and center console also own and pilot aircraft. And that makes perfect sense, because for those with the means — and adventure in their souls — to have both, the tie in of piloting fast machines on and above the water is natural.

So when I head about the ICON Aircraft 100 A5 amphibious airplane priced at $257,000 (loaded with the “Premium Package” — base price is $207,00) and powered by a 100-hp Rotax 912 engine — think Bombardier Recreational Products, the former parent company of and power-supplier for Sea-Doo personal watercraft — it piqued my interest. True, it’s a bit of an offbeat topic for an offshoreonly.com column, but it’s not that offbeat.

Headquartered in Northern California, ICON began producing the A5 in July 2015. The two-seater falls into the Federal Aviation Administration Light Sport Aircraft category and Sport Pilot License requirement, which takes 20 hours of training and can be, according to ICON press materials, completed in two weeks. (ICON provides its own fee-based Sport Pilot License training course for the A5.)

The company’s stated official vision is “democratized aviation, a revolution in personal 3-D mobility, accessible to mainstream consumers,” and its mission is “to bring the freedom, fun, and adventure back to flying to all who have dreamt of it. ICON aims to make flying easier, safer, and more fun by creating the coolest, most innovative, consumer-friendly aircraft in the world.”

Those are lofty goals, to be sure, but with almost 2,000 deposits on the A5, according to the ICON press kit, the company seems well on its way to achieving them. 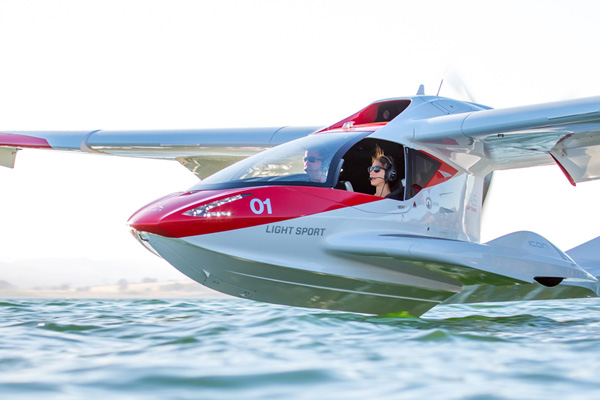 A Sport Pilots License for the ICON A5 aircraft can be earned in 20 hours.

Trailered width is 8-1/2 feet. That’s right, the A5’s patented and proprietary high-performance wings can be removed so the aircraft can be hauled from one location to the next. For ballers in the poker run crowd — you know, the folks who haul color-matched exotic bikes and cars with them to various events — the A5’s portability could be attractive.

Safety features — always a plus for things people can fly — of the A5 reportedly include a spin-resistant airframe, a wing angle of attack indicator, low stall/landing speed (45 mph) and a complete airplane parachute. For those who haven’t seen one in action, the definition of a “complete airplane parachute” is included in its name. Relative to the total price of the aircraft, it’s a worthwhile option at $15,000.

In addition to Rotax power and amphibious design, the ICON A5 aircraft has at least two other connections to the marine industry. John Dorton, the former chief executive officer of MasterCraft and Henio Arcangeli, the president of Yamaha Motors USA, are advisors to the company. On the aviation side, ICON has heavy-hitter investors/advisors Joel Peterson, the chairman of JetBlue, and Phil Condit, the former chief executive officer and chairman of Boeing, in its camp.

As for the A5’s price tag of $250,000 and change, it’s definitely above the pay-grade of the “average” performance-boat owner (and marine journalist). Then again, it’s less than half the price of most custom-built, quad-outboard-powered center consoles.