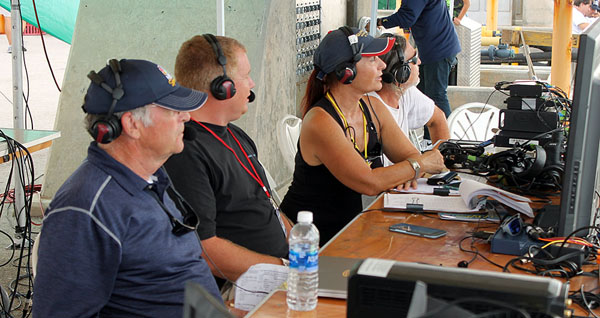 If you didn’t get a chance to watch or listen to Friday afternoon’s broadcast of the Super Boat International Offshore World Championships in Key West, Fla., I’d highly recommend paying the $4.99 to purchase the livestream replay at superboat.com. I did and I was there—sitting a row behind the Super Boat International broadcast team with my laptop open—when, after calling the dramatic crash between CT Marine and CMS in the day’s third race, race announcer Mike Yowaiski made a joke that he’d have to call in the “B Team” following the Superboat Unlimited race that included the heart-stopping crash that ended up being replayed hundreds of thousands of times on TVs, computers and phones across the world.

During the horrific wreck that led to serious damage to the catamarans, but fortunately not to any of the four racers, it’s Yowaiski who lets out the surprised and horrified “Oh, Oh, Oh, Oh” before his counterpart Nancy D’Amato gasps in amazement. Yowaiski, who can now say he’s been featured on “Good Morning America” and every other morning news show around the country, kept his wits about him and didn’t overstate it when he said he’s never seen anything like it before.

And on Sunday, the final day of action, I don’t think he was overstating it when he said the Superboat Stock-class race was the most exciting one he’s ever called. And he’s announced a lot of races between the last two seasons with the SBI team and many years with the New Jersey-based Offshore Powerboat Association. The race was exciting with several lead changes, a winner that came from behind after spinning out in a turn and a deck-to-deck battle for second settled by less than a boat length.

Watch and listen to the Superboat Unlimited-class action as CT Marine goes over the top of CMS on Friday.

The joke in the broadcast booth was that Yowaiski needed some kind of downer after his adrenaline-fueled giddiness overcame him at the end of the race. Still, he had the right to be excited. In fact, that excitement is what makes him a great broadcaster. A great broadcaster, who happened to turn 40 today. Happy birthday Mikey!

Full disclosure here—Yowaiski has been a friend since I met him when he was calling the OPA St. Clair River Classic in Michigan and I was covering the race for Powerboat magazine about a decade ago. He’s also contributed to speedonthewater.com over the past six years and been an invaluable source of information along the way.

Much to his credit, he isn’t just a ball of enthusiasm with a range of inflection in his voice; he provides a wealth of knowledge when it comes to racing history, boat setup, race day mentality and more. Teamed with “Nancy D” and sometimes sidekick Tommy Sanders, this year’s SBI broadcast was on point for the 37th annual event on all three days of racing—Wednesday, Friday and Sunday. 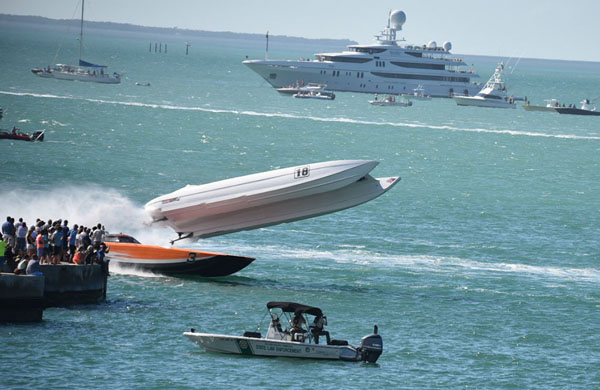 This dramatic crash between CT Marine and CMS left Mike Yowaiski calling for the “B Team” on Friday. Photo by Sam Jirik

Because I was on a plane en route to Key West, I missed Yowaiski’s call of Wednesday’s exciting race in the Superboat Vee class, which was competitive all weekend despite the same winners in each race—Britt Lily and Rom Umlandt of LSB/Hurricane of Awesomeness/Rev-X Oil. Again, I went back and watched the livestream and was not disappointed.

I have to say, my favorite call of the week was following Friday’s third race with the CT Marine and CMS crash. Yowaiski turned to D’Amato and Sanders and said, “Stay with us as we have one more race to call. I don’t know if I’m going to have it in me, we may have to call in the B Team here. That one took a lot out of me. Matt Trulio and Jason Johnson from speedonthewater.com—maybe they want to come in and do something with us? Oh they’ll pass.”

Just as adrenalized as Yowaiski was following the incident, Matt and I immediately waved him off with a couple of “no thanks” hand signals. After all, we knew there was no way we could fill in for Yowaiski.