You are at:Home»Awesome»Why Print Rocks

Despite the stupid hours Jason Johnson and I will put in during the next six days getting the 2017 Speed On The Water Year In Review print edition ready for press, I still love everything about the magazine-building process. We produce a digital magazine every other month and—don’t get me wrong—we’re proud of that product. It’s a lot work, but it’s also a lot of fun. But while I have every issue of our active PDF magazine on my laptop, I can’t stack any of them on my coffee table.

And that kind of sucks.

But in less than a month, I’ll have a third oversized Speed On The Water Year in review issue—a 196-page whopper— to stack atop the 132-page 2015 edition and 164-page 2016 issue on that table. So while the work ahead is formidable, the joy that comes with holding the finished product is more than worth it.

I spent much of yesterday morning reading layouts for the New Boats section of the issue. In the afternoon, I turned my attention to the Events section. Today, I’ll be looking at the Racing section. Each event and race requires a summary and detailed captions. The summaries come from coverage of those events on our daily news sites. The captions—probably the most painful part of the editorial process in an issue such as this one—come from a whole lot of phone calls with organizers and participants. 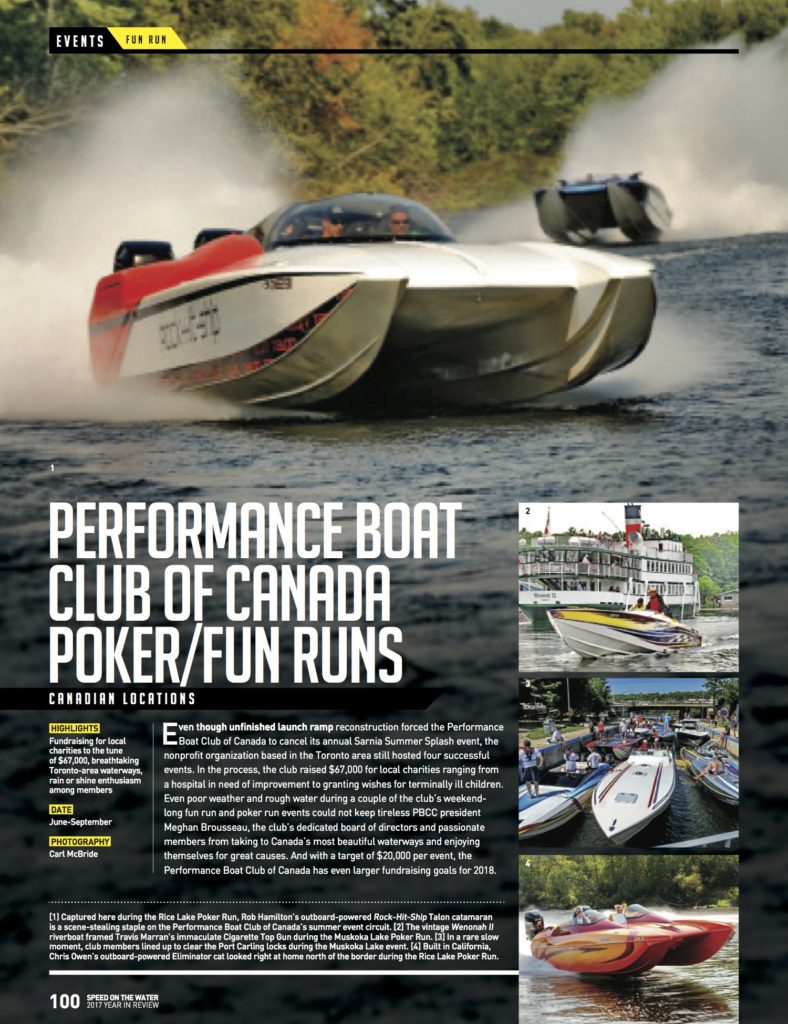 From writing text to copyediting layouts, all of the work required to produce a print magazine becomes worthwhile when you hold the finished product.

As you’d expect, all of performance-boating’s biggest events, from Desert Storm to the Florida Powerboat Club’s Key West Poker Run, are included. But what’s particularly pleasing and satisfying is when we’re able to add worthy events, such as the longtime Powerboating For A Cure Poker Run, the 2017 Performance Boat Club of Canada season and the new 1,000 Islands Charity Poker Run, to the mix. Our goal is to be as complete as humanly possible. Adding events means we’re headed in the right direction.

Between reading the Event and Racing sections yesterday, I took a break to talk shop—via instant messaging online—with my friend Ray Lee, the co-publisher of Speedboat magazine. In addition to printing six times a year, Speedboat publishes three digital magazines, bringing the total annual count to nine issues. There are moments when I see Speedboat and feel a twinge of jealousy, but they don’t last long thanks to my Powerboat magazine memories of circulation, distribution and subscription nightmares. So one massive print issue a year is enough.

Still, among adults of a certain vintage, print magazines always will hold a special place. The online world delivers speed and reach that print publications can’t touch, but “touch” is exactly what’s missing from that world. I don’t care if you’re into cars or boats or cooking or surfing, if you grew up with print magazines chances are good that you love and miss them.

And that means I need to get back to work.