You are at:Home»In Memoriam»Blood Brothers 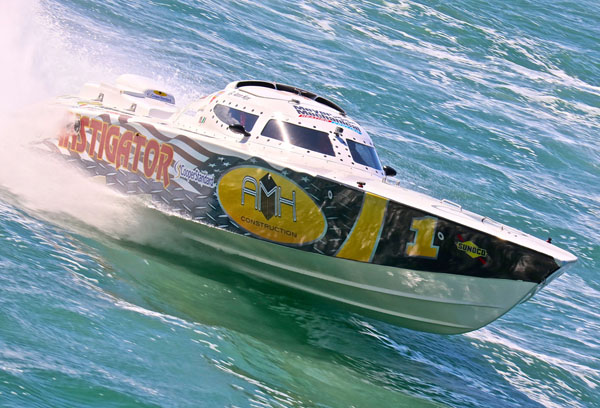 Peter Meyer plans to field the AHM Construction/Instigator team next season but said it won’t be close to the same without his longtime friend, former teammate and competitor Joe Sgro. Photo by Pete Boden/Shoot 2 Thrill Pix.

On the final day of the Super Boat International Offshore World Championships last month in Key West, Fla., veteran racer Peter Meyer walked the dry pits and the outer mole spectator area like a man in a trance. His eyes red and brimming with tears, his voice soft and hoarse, he ambled up and down the long jetty aimlessly, almost as if he were looking for something cherished he’d lost.

But it wasn’t something. It was someone.

Just three days earlier, his best friend Joe Sgro had died following an accident during the Florida Powerboat Club’s Key West Poker Run. Meyer and Sgro, the 66-year-old principal of Outerlimits Offshore Powerboats in Bristol, R.I., shared a 35-year friendship on and off the racecourse.

“I raced with him and I raced against him,” said Meyer. “We loved it. We loved each other.”

After competing against each other in the 1980s, Sgro and Meyer joined forces in Meyer’s first 32-foot Activator, an open-cockpit V-bottom that became the first Instigator—a team name Meyer has used ever since—raceboat. With Meyer throttling and Sgro behind the wheel, they were a force to be reckoned with from the moment they first teamed up in 1992. The two eventually ended up running a 40-foot Fountain.

“We beat Reggie Fountain’s team in this Miami race, and Reggie came up to us after and said, ‘You know, I need you boys in one of my boats,’” Meyer said, then laughed.

“It was great racing back then—those were the Nick Carter days and the Dave Branch days—and it was always intense,” he continued. “There would be 20 boats out there, and we had a lot of good times. Joe was a good driver. He always wanted to be going 100 mph with his hair on fire. He loved racing. And he loved the boats.”

While Meyer and Sgro eventually parted ways as teammates, they remained close friends. In more recent years, competition in the Superboat Extreme V-bottom class with Meyer running a Fountain Sgro campaigning an Outerlimits brought them even closer.

“When two guys know all the same things they learned together, it’s always a dogfight,” said Meyer. “Joe was tough. He was very tough, and it took awhile to get that Outerlimits to ride the way he wanted it to. But on Friday and Saturday nights during race weekends, we’d all go out to dinner together. In fact, my wife went out to lunch with his wife, Eileen, yesterday. She was a good wife to him. And he was a good husband.”

Meyer paused for a moment. His voice cracked when he spoke again. “I really miss him,” he said.

Despite the fact that his best friend won’t be there to challenge him on the racecourse, and goof around with him off it, Meyer said he plans to compete next year. In fact, prep work has already begun on his Fountain V-bottom for the upcoming season.

“I’m not going to quit—I’m not a quitter,” he said. “But I’m going to miss the friendship and camaraderie that Joe and I had. He was my best friend.”