You are at:Home»Industry»The Entry Level Challenge 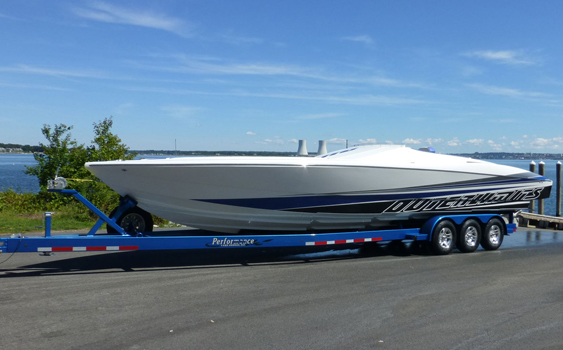 Can a twin-engine 36-foot high-performance powerboat be called “entry level?” Relative to other offerings in the Outerlimits line, the new Super Leggera 36 certainly can.

Last week, I reported that Peter Hledin of Douglas Marine/Skater planned to release an entry-level 24- to 25-foot, 100-mph high-performance catamaran priced at $100,000 next year. Most of the response to the story was of the “Great news, can’t wait to see it” kind, but two readers objected to my use of “entry-level” in reference to a product with that sort of price tag.

Trust me, I understood where they were coming from. In my world, $100,000 is a lot of money, especially for something that feeds a hobby. But I also have a decent understanding of new go-fast powerboat pricing. And for a custom-built, single-engine catamaran—much less a coveted Skater product—capable  of reaching 100 mph that price is indeed entry level.

Of course, everything is relative. If you think this hobby is expensive, try aviation. Or breeding quarter horses.

So why are new entry-level go-fast boats in the 24- to 30-foot range so “expensive”? Since I began covering this market in 1994, custom and production builders and dealers have told me that given the costs involved and the pricing the market will bear, profit margins are thin in that segment of the market. I have no reason to doubt them. 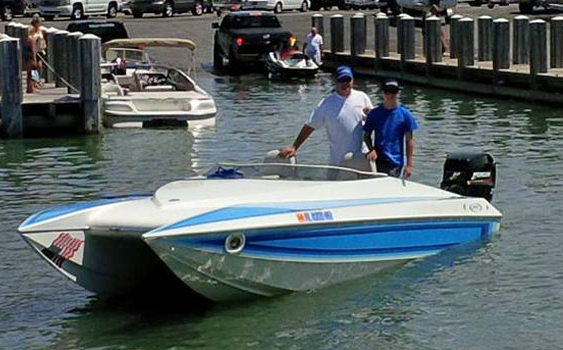 Peter Hledin plans to introduced a new 24- to 25-foot cat, a descendant of the original Skater 24 shown here, next year.

Scott Sjogren, the owner of new and pre-owned high-performance powerboat dealer and service center Pier 57 in Waukegan, Ill., says one of the easiest ways to look at it is in terms of what he calls buckets.

“In the first bucket you have the engine package, drive, exhaust, propeller, transom assembly and so on,” he explained. “In the second bucket, you have paint, vinyl, foam, gauges, steering, controls, appliances and hardware such as cleats and nav lights. In bucket No. 3, you have fiberglass, resin, coring materials and whatever else you need to build the hull and deck. And then in the fourth bucket you have employees with Worker’s Compensation insurance, your facility and all the other costs of doing business.

“Add up all the costs in all those buckets, and if the manufacturer and dealer are going to make a fair profit—and the consumer is going to get a lot of value—you could be well over $100,000 for a single-engine sportboat,” he added. “I actually lost money selling one builder’s entry-level sportboats—I had to write a check to get out of them. The cost of doing business has made it very difficult for consumers to get into this sport.”

And Sjogren is talking about models with existing tooling. New models have a fifth bucket—molds and plugs—that builders need to factor through amortization—into suggested retail pricing.

Lamination material costs, of course, are higher in larger twin-engine performance boats, but Peter Hledin describes them as “a fraction” of the total material cost. Yes, twin-engine boats do have a second engine, but that can be accounted for in the retail price. The added rigging costs are insignificant according to any number of builders including Mike Fiore at Outerlimits.

“It’s much easier to make money on a bigger boat than a smaller boat,” said Fiore, whose latest twin-engine 36-footer is, by Outerlimits’ standards, an entry-level offering. “With smaller boats, you have to be very conscious of controlling every cost, especially labor. You have to be able to build them very efficiently.” 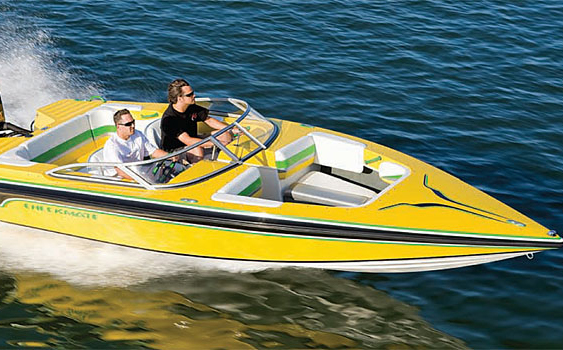 The acquisition of the Checkmate line by Global Marine Performance could be good news for the entry-level segment of the market.

So where does that leave buyers on tighter budgets? Nowhere fantastic. The late-model used-boat market—at least if you’re talking about models that Sjogren calls “clean, low- to medium-hour freshwater boats”—for go-fast rides built after 2008 is becoming less of a solution because those pre-owned models are getting harder to find. Meeting entry-level sportboat demand, which is slowly clawing its way back from the recession, is a huge challenge for  the industry, because bringing in “new blood” is crucial to the future of all builders.

There are no easy answers, but there is hope thanks to projects such as Skater’s future small cat and a single-engine, semi-custom 29-foot V-bottom in the $150,000 list price range that could be coming next year from a long-established V-bottom builder who isn’t quite ready to go public. The acquisition of the Checkmate line of sportboats, which were always aggressively priced and presented solid value, of Global Marine Performance (the parent company of Hustler Powerboats) in July also appears to be good news for the entry-level segment of the market.

But even at the entry level,  don’t look for miracles—at least when it comes to bargain-basement pricing.

“A boat is the last hand-built item in America,” said Sjogren “I’m not sure that people really understand that.”