You are at:Home»LOTO»Shootout Competitors for a Cause 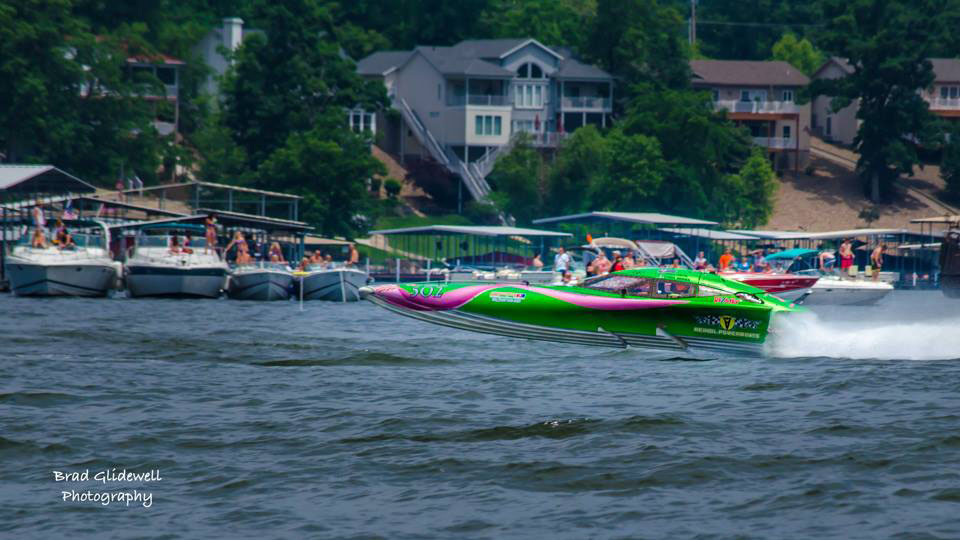 The Early Detection Racing V24 from Reindl Powerboats will be participating in the 2015 Lake of the Ozarks Shootout. (Photo courtesy Brad Glidewell.)

When first-time Lake of the Ozarks Shootout competitors—and longtime Shootout spectators—Ricky and Nikki Amos strap on their helmets and close the canopy in the Reindl Powerboats One Design V24 on Saturday, Aug. 29, they’ll be dedicating their run along the one-mile course in the 24-foot “bat boat” to cancer victims and survivors everywhere.

Even closer to their hearts, the runs—they’ll do at least two so they can both throttle—will be in memory of Ricky’s mother, Amy, who lost her battle to bone marrow cancer in 1999, and Nikki’s sister-in law, Kelly Lee, who lost her battle to cervical cancer last year. The husband-and-wife team from St. Charles, Mo., can’t wait to be more involved with the Shootout than ever this year with help from Chris Reindl.

With a mission to educate people on the early detection methods for breast, lung, colon and all other forms of cancer, the Early Detection Racing boat is one of several V24s rigged by Reindl of Reindl Powerboats and One Design Racing that is powered by an Ilmor Marine MV8 570 engine.

With a top speed near 90 mph in the 24-footer, Reindl said the couple, who will get some seat time in the boat next week and be part of Wednesday night’s Shootout on the Strip, is in for the time of their lives. 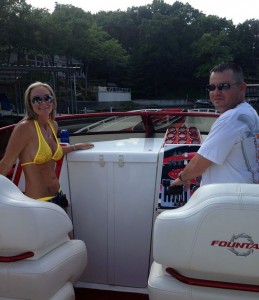 Frequent boaters on Missouri’s Lake of the Ozarks, Nikki and Ricky Amos have been spectators at the Shootout dating back to the event’s old location at Shooters 21. (Photo courtesy Nikki Amos.)

“We’re excited to have Ricky and Nikki run the Early Detection Racing boat,” said Reindl, who bought the boat early last year from the Palmer family that campaigned it for a couple of years as the StLukesEarlyDetection.com offshore raceboat and installed the Ilmor engine in it shortly thereafter. “We’re bringing that boat and the yellow one. This is our fourth year in a row we’ve brought boats to run. We love the Shootout.”

“We’ve gone to the Shootout for so many years—we love Lake of the Ozarks—but we’re usually just spectators,” said Nikki, adding that Ricky found out via Facebook that Reindl leased the boats to use at races around the country, and that one of the most notable V24s was the Early Detection Racing boat. “When we found out we could run a boat at the Shootout to raise awareness for something that hits so close to home, we couldn’t sign up fast enough. I mean what a great way to get the information out about early detection and have some fun at the same time.”

Of course Ricky and Nikki wanted to make sure the cause was legitimate, but once they spoke with Reindl, who lost his mother to lung cancer as well as several friends and family members to various forms of cancer, they were all in.

Both Reindl and Nikki said it really doesn’t matter how fast they run next weekend. The bottom line is that showcasing the boat is all about promoting the life-saving benefits of early testing and early detection of cancer.

“Ricky and I are both passionate boaters so we’re very excited to be a part of this experience,” Nikki said. “We just hope the boat’s message sinks in with as many people as possible.”