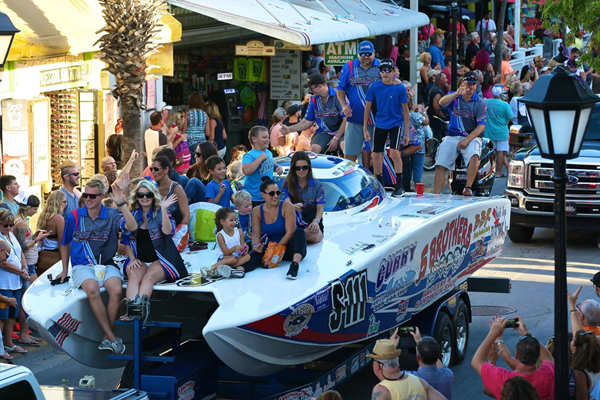 When the offshore racing and poker run circuses come to town concurrently in Key West each year, everybody wins. Photo by Pete Boden.

You could make a case — and a pretty compelling one — that the Florida Powerboat Club’s Key West Poker Run is the most successful event of its kind. The run, which celebrates its 25th anniversary this year, routinely attracts 150 boats for the better part of a week to the nation’s southernmost city. And now and then, the party stops just long enough for the poker runners to catch some powerboat racing action courtesy of Super Boat International, which runs its Key West Offshore World Championships concurrently — though not in conjunction — with the poker run.

Also without question, both benefit the respective and even collective participants and fans of each activity. It doesn’t matter if a poker run boat owner never catches a single lap of the SBI races on Wednesday, Friday and Sunday or if an offshore racer doesn’t spend a minute wandering the FPC Poker Run Village. Blending poker run enthusiasts, offshore racers and the fans of both — all members of the same performance-boating family — in a small town for a week creates synergy.

Or as someone pretty smart — OK, Aristotle — once put it, “The whole is greater than the sum of its parts.”

Two more events combining poker runs and offshore racing are slated this year. The Offshore Powerboat Association is holding a race April 29 in Bimini, which is running in conjunction with the Chesapeake Bay Powerboat Club’s poker run to the tiny Bahamian islands off the east coast of Florida. Several of the approximately 60 boats participating will work as support vessels for the race.

Organized by Elite Poker Runs LLC, a poker run also will happen during the July 21-23 SBI Cleveland Construction Super Boat Grand Prix in Mentor, Ohio. As in Key West, the race and the poker run are concurrent but not unconnected to one another, at least at the organizational level.

Could you call it a trend, this offshore race and poker run combo? No way, the sample size is far too small for that label. But you could call it any number of positive things, including a step in the right direction. You could even get fancy and call it synergistic.

Or you could just call it smart.