You are at:Home»Poker Runs»Volunteer Meets Bluegrass for a Poker Run Resurgence 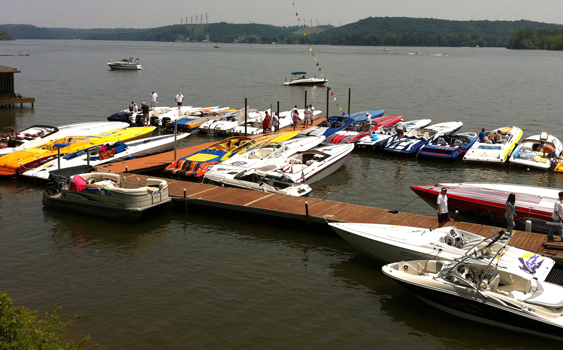 The Chattanooga Poker Run in May is the first in a series of poker runs in the Tennessee and Kentucky region that are growing in popularity.

The Lake Cumberland Poker Run hosted by State Dock in September has long been a premier event when it comes to poker runs across the United States. But up until the past few years, there weren’t many other must-run events in that area of the country. Now, thanks to a handful of dedicated boaters in the Kentucky and Tennessee areas, there is an enjoyable, affordable and charitable group of runs to choose from in the region.

While the half-dozen events in and around Tennessee between May and September may be in competition for participants, as well as sponsors, you’d never know it by talking to the organizers of the various poker runs. 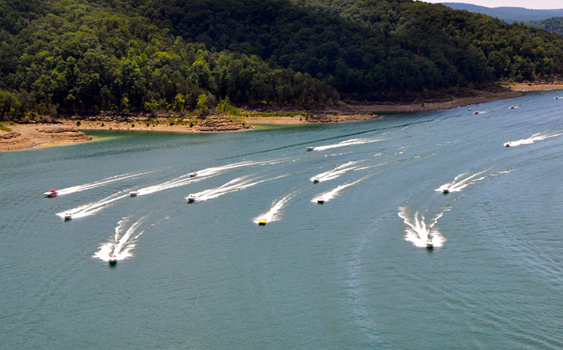 The Lake Cumberland Thunder Run on the scenic Kentucky waterway will celebrate its fifth anniversary this June.

“Myself and Gerald Brown, who lives in Chattanooga too, discussed bringing a poker run to this area and using our insight on what people do right and what people do wrong at poker runs we’ve attended to bring a fun, safe event to our neck of the woods,” said Mark Godsey, one of the organizers behind the Chattanooga Fun Run (May 10-11) on Chickamauga Lake, which benefits the Children’s Advocacy Center of Hamilton County. “We wanted to put together a run that was affordable, benefited a good cause and was, most of all, fun. Between the natural setting and beautiful scenery that hasn’t been commercialized with houses and other development and the wide-open, deep, clean lake, this is a perfect place for a poker run.

“On Friday for the fun run, we’re going to go through the locks and into downtown Chattanooga,” added Godsey, who is expecting more than 100 boats this year. “We couldn’t have done this without our sponsors, especially Pier 57. I can’t thank Scott [Sjogren] and the guys enough for their support. Also, Chad Collier of the Tennessee Powerboat Club has been instrumental in helping me get more sponsors involved and Justin Lucas, of the Lake Cumberland Thunder Run [June 21-23], has been real helpful with many of the formalities.”

Between Collier, who is organizing the Tennessee Powerboat Club Fun Run (July 26-27), Godsey, whose new 38-foot catamaran from Marine Technology Inc. (MTI) was on display at the Miami International Boat Show, and Lucas, who owns Go Fast Threads, the three friends have created a poker run network that also extends to John Johannes of the 11th annual Tennessee River Rally Poker Run (June 8), which starts at Ft. Loudoun Marina in Lenoir City and makes its way to downtown Knoxville past the University of Tennessee and Neyland Stadium. The aforementioned Lake Cumberland Poker Run (Sept. 6-8) caps the region’s season in style on the popular lake in southern Kentucky. 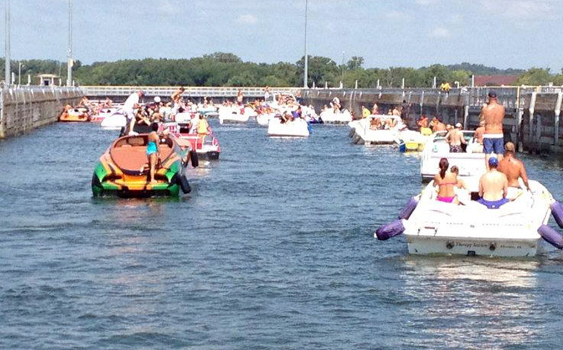 During the Tennessee Powerboat Club’s Fun Run in July, participants will lock through the Old Hickory Dam en route to downtown Nashville.

“It’s kind of like an alliance with people who have the same interests and appreciate each other’s input,” said Justin Lucas, who recently moved to Hendersonville, Tenn., but still helps Somerset, Ky., boater Dan Weiss put on the Thunder Run. “We work really well together and have tried to plan our runs so there’s time in between each of them. Whether you can do every run or one or two of them, you’re guaranteed to have fun at all of them.

“We’ve kept our entry fees down and give people the most for their money, and I know the other events are trying to do the same,” added Lucas, who owns a 288 from Sunsation Boats. “For example, we have a fireworks show and live entertainment following our awards dinner. We understand the event needs to be affordable for everyone so guys with smaller boats can participate. Our run is not about the fastest boats. In fact, our cruiser class has grown the most the last few years.”

The organizers from the Bluegrass and Volunteer states are quick to include the Pirates of Lanier Poker Run (July 18-21) in Atlanta amongst the region’s group of events since the run on Lake Lanier is, at most, five hours away from the other venues. (For more, read The Year’s Must-Attend Poker Run: Pirates of Lanier.) Plus one of the event’s board members—John Woodruff, who owns the 48-foot MTI Windship—is more than welcomed into the “alliance.” 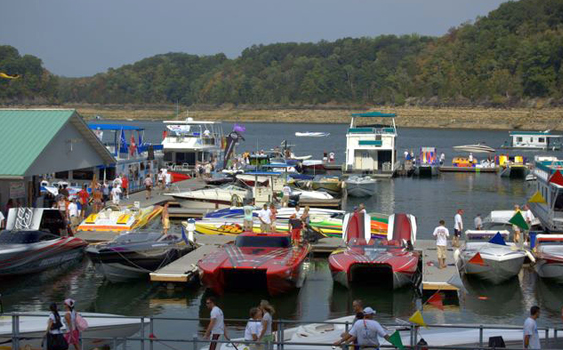 With more than 150 boats usually in attendance, the Lake Cumberland Poker Run on State Dock is one of the most popular in the country.

“Atlanta, Chattanooga, Cumberland, Nashville—we all work good together,” Godsey said. “It’s about getting everybody in our areas to support each other. They’re all for good charities and organizations, and they are not expensive to enter.”

While the charitable side of his run is a priority, Collier, the director of the recently reorganized Tennessee Powerboat Club (formerly the Music City Powerboat Association), is trying to make the poker run more of a community event.

“Nashville is a fun city with an amazing riverfront area that I’m trying to incorporate more into our run,” said Collier, who owns a 40-foot race/pleasure catamaran from MTI. “We’re going to make our event more festive this year. Along with Friday’s fun run and in-water boat show on Old Hickory Lake, we’re going to lock through the dam and run to downtown Nashville on Saturday. I’m trying to get the city more involved and spread the word out to more than just powerboaters so other people can see the fun in what we do and maybe get involved as well.”

With support from Tennessee Titans kicker Rob Bironas—his Rob Bironas Fund within the Community Foundation of Middle Tennessee is the event beneficiary—Collier said the event is already getting attention from high-profile sponsors and local media.

“My ultimate goal is to have all of the Tennessee events under one roof, which would help with organization, insurance and much more,” Collier said. “That won’t happen overnight, but in the meantime we’ll keep working closely to promote this area and promote this sport.”