You are at:Home»Racing»Added Support for F1 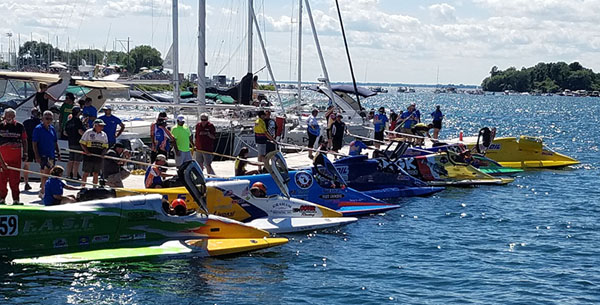 Thanks to the efforts of Tim Seebold (center), his longtime sponsor came on board as the primary sponsor of the NGK Spark Plugs Formula 1 Powerboat Championship series. Photo by Paul Kemiel

Thanks to six years as the sidekick to Matt Trulio at speedonthewater.com and seven years before that as an editor at Powerboat magazine, I’ve covered my fair share of boat races. I’ve experienced offshore racing in Hammamet, Tunisia, Long Beach, Calif., St. Clair, Mich., Key West, Fla., and many places in between. I’ve also soaked in the thunderous sounds of the hydroplanes as they sped along San Diego’s Mission Bay and Michigan’s Detroit River in the chase for the illustrious Gold Cup.

But to me the most captivating racing I’ve witnessed in person was the F1 tunnel boat series more than a decade ago when the sport was remarkably more viable than it is today. On top of that, getting to meet, interview and recount stories with the members of tunnel boat racing’s royal family — the Seebolds — is an obvious highlight in my career. So is getting to cover the progress of internationally respected driver Shaun Torrente, who finished second overall in the 2016 F1 H2O World Championship.

All of that (and more) is why I’m pulling for the recently announced NGK Spark Plugs Formula 1 Powerboat Championship to succeed. Besides the fact that two accomplished racers — Chris Fairchild and Tim Seebold — are involved in the promotion of the events and that Seebold’s longtime sponsor NGK is backing the endeavor, the six-race partnership series has a vision that makes sense.

“The whole goal behind this is to engage more people,” said Seebold, who is one of the primary promoters of the first race of the season, the Gulfport Grand Prix in Gulfport, Fla., at the end of April. “Along with the Tri-Hull and the F-Light classes, we’re going to run the F1 Sport class, which opens up the competition to a larger pool of boats thanks to the different engines you can run in the class. We need to get as many boats as we can to make the racing as competitive and as exciting as possible — and put on a real show. That’s when we’ll get the sponsors and the spectators.

“Ultimately we need do what’s best for our sport — get it back on its feet and headed in the right direction,” continued Seebold, who retired last season following an accomplished racing career. “I love the F1 class — it’s what I aspired to drive my whole career and it’s definitely fun, but the fact of the matter is it’s a dying class right now so we need to do something to enhance the competition and put on a great show. That starts with more entries and we have some plans in place to attract and assist more drivers through prize packages, points funds, leasing programs, promotional packages and a safety-first mentality.” 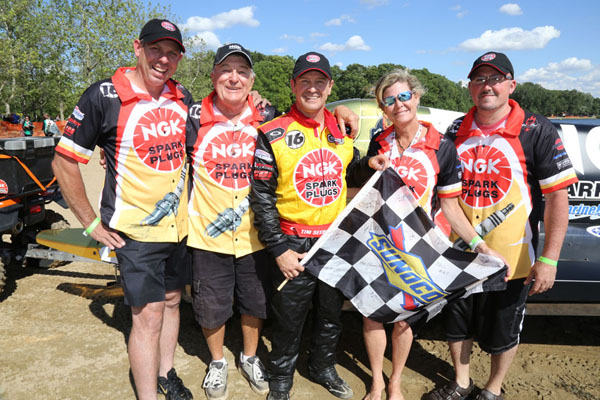 Seebold said the series, which includes races in Port Neches, Texas (May 6-7), Nashville, Tenn. (June 16-18), Trenton, Mich. (July 14-16), Detroit (Aug. 26-27) and Orange, Texas (Sept. 16-17), is going to be sanctioned by the American Power Boat Association and organized by the S.P.O.R.T. Racing Series. He’s especially excited about the television coverage as is the team NGK in Wixom, Mich.

“We’re excited to be involved as the primary sponsor of the NGK Spark Plugs Formula 1 Powerboat Championship alongside the Seebold Sports team,” said David Boer, vice president of marketing for NGK. “This partnership offers an opportunity for both brands to further engage with an audience who is interested not only in Formula One boat racing, but the highest-quality spark plug and oxygen sensor technology on the market — NGK and NTK products.”

According to Seebold, the broadcast coverage is going to be transmitted in several ways. Three half-hour shows covering the series will be broadcast in national primetime slots on the East and West coasts, and then made available on demand via a leading automotive content portal, Motor On Demand. Additional coverage will air within the program Motorsport Mundial also on MotorTrend On Demand and within the Max Power on MAV TV. Highlights from every round also will be featured in the weekly show Planet Speed, which can be seen by more than 700 million homes worldwide.

“One of the reasons I quit driving last season is that my family and myself don’t want to see something we spent our entire lives doing go down the tubes because no one made any changes to do what was best for the sport,” Seebold said. “I don’t want to leave boat racing and not try to help it. We started working on this a couple of years ago, it got more intense last year and this year it’s happening. We’re excited about the possibilities and happy to have a sponsor like NGK behind it.”