You are at:Home»Racing»Welcome to the Club

It’s been 40 days since Myrick Coil and John Cosker sped down the Lake of the Ozarks Shootout course at 208 mph in Don Onken’s 51-foot Mystic Powerboats catamaran to cement their name in history on the event’s Top Gun trophy, and I would assume Coil still gets an enormous smile on his face when someone asks him about the run in American Ethanol, which is powered by quad 1,700-hp alcohol-burning engines.

At least that’s what I envisioned when I reached him on his cell phone last week at the Douglas Marine/Skater Powerboats facility where he was working on the new Performance Boat Center Skater the Osage Beach, Mo., dealership and service center is planning to race in the Superboat class at next month’s Super Boat International Offshore World Championships in Key West, Fla.

Obviously I couldn’t see him, but I could hear the inflection in his voice when I asked him to reflect on the Shootout and joining an elite club of performance boaters who have run faster than 200 mph, including Cosker, Mystic’s owner and founder; and his friend and former employer Dave Scott, who campaigned the Nauti Marine- and Anheuser-Busch-backed boats for many years. 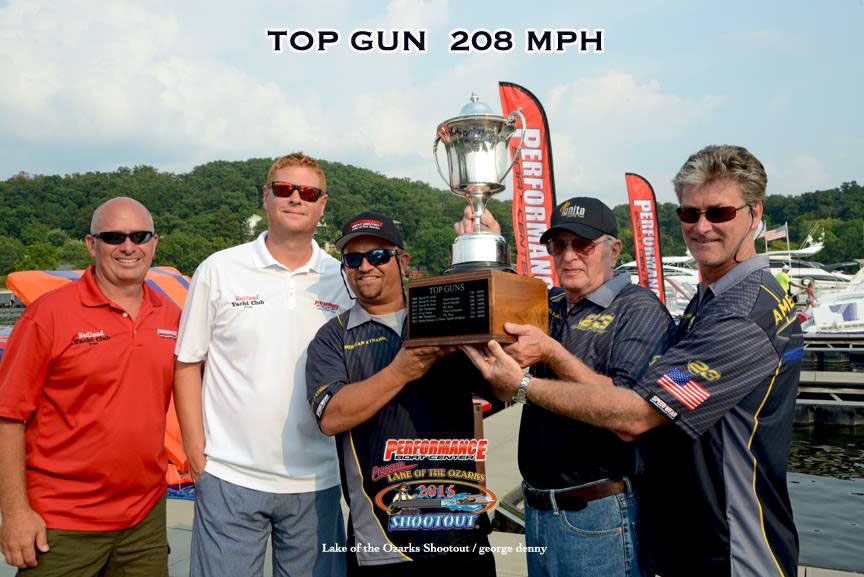 From left: Performance Boat Center’s Mark Waddington and Brett Manire joined Coil, Onken and Cosker for a picture with the Top Gun trophy.

“Between running around the lake with Dave in his Mystic and driving with John Tomlinson in the little 36-foot Skater at the 2013 Shootout, I’ve been close to 200 mph before,” said Coil who was part of Scott’s offshore racing team for many years and ran 195 mph with Tomlinson in the Skater powered by twin 1,700-hp Sterling Performance engines. “It’s been a long time coming. And now that I’ve done it, I think it’s something everyone should get the chance to do—especially in one of John’s boats.

“The Mystic was just phenomenal and it confirmed to me that if you want to win the Shootout, you better show up in a Mystic,” added Coil, who works at Performance Boat Center, which merged with Nauti Marine in 2014. “The feeling in American Ethanol was much different than the Skater we ran 195 mph a couple of years ago. The Skater pulled so hard off the line, but the Mystic took a little more time to get going. We were running around 80 to 90 mph at the quarter track and then all of the sudden the boat pulled harder than anything I’ve ever been in. It was crazy. Literally the speed on the GPS started climbing in 20-mph increments.”

Coil, who thanked his wife, Missi, and their three kids for supporting him, said the run was a little surreal because he tied the fastest speed Scott ever ran at the Shootout, which is still the top speed recorded by a non-turbine-powered boat in the 27 years of the event (Scott ran 208 mph in 2010).

“We pulled just like Dave and Johnny [Tomlinson] did so I guess I felt what Dave felt that day,” said Coil, who also ran Performance Boat Center’s 52-foot Outerlimits V-bottom to a top speed of 139 mph. “Beating Dave’s speed would have been real cool just so I’d have the bragging rights over my good friend. Either way, now we have a goal for next year. We’ll try to break that record and we’re going to shoot for the top V-bottom overall. It would be pretty cool to be able to claim the fastest cat and V-bottom at the Shootout.”

Coil said he believes the American Ethanol 51-footer is capable of running faster.

“I don’t think it’s ‘Sheikh Hassan’ fast,” Coil said, referring to last year’s 244-mph record-setting top speed ran by Sheikh Hassan bin Jabor Al-Thani and Steve Curtis in the Spirit of Qatar team’s turbine-powered Mystic. “I think it will be in the ‘two-teens’ maybe even 220 mph if we get everything dialed in. Trust me, Don’s wheels are already turning on what can be done to take advantage of the power.” 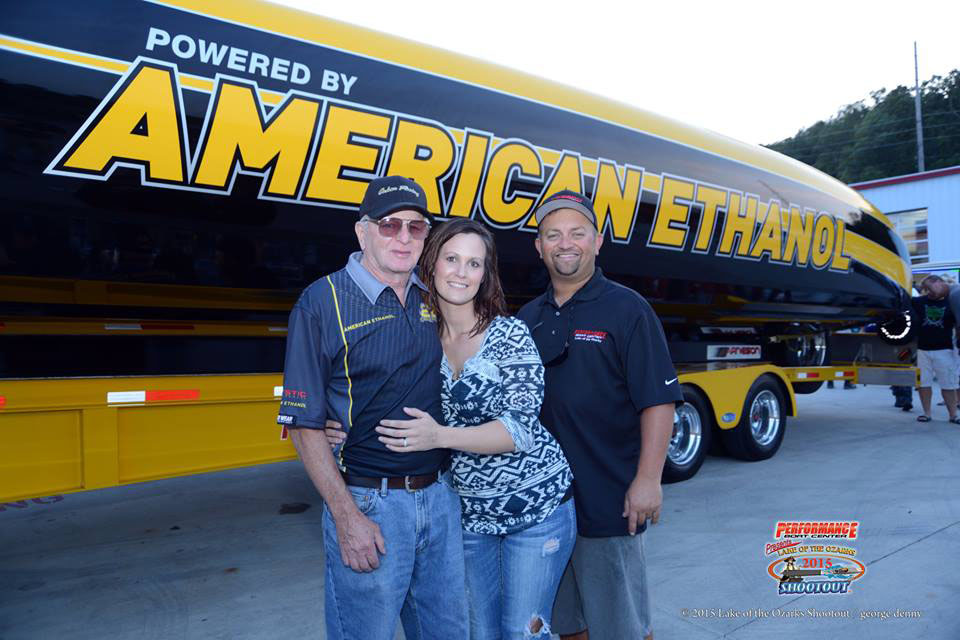 Coil also thanked everyone on the American Ethanol crew for their efforts in getting the boat to the start line.

“It was great—I just got to show up and get in the boat—normally it’s thrash on the boat and thrash on it some more, then push it off the docks and say ‘good luck,’” Coil said with a smile, of course.

I guess I’ll have to check in with Coil in another 40 days to see how he is feeling after a week in Key West with the new Performance Boat Center Skater. Who knows, maybe his smile will be even bigger.