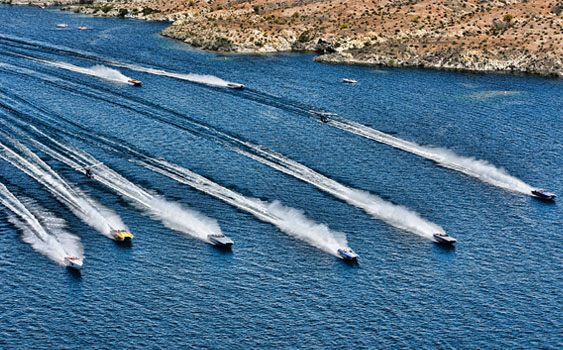 With safety as a priority, poker run formations like this one from the Desert Storm Poker Run can be an amazing sight. (Photo by Jay Nichols.)

As many of you read this, I will be embarking on a half-day drive to Lake Havasu City, Ariz., with Matt Trulio, my co-publisher at speedonthewater.com, for the annual Desert Storm Poker Run, one of the coolest events of the year in my book.

While Lake Havasu brings to mind some fond memories—from boating on the lake as a teenager with my grandparents to testing boats as a 30-plus-year-old alongside Bob Teague and John Tomlinson for Powerboat magazine—it also reminds me of some melancholy incidents. While I was in high school, my friend’s brother drowned after jumping off a cliff into the lake, and last year I reported on a couple of boaters who are lucky to be alive after a scary incident during the poker run (read the story).

Remembering last year’s crash and the craziness surrounding the questions that inevitably arise—what boat flipped, who was in it, are they OK, and many more—isn’t enjoyable, but it does make me want to write about being safe on the water. I know there are only so many things that can be said, such as wear life jackets, have a designated sober operator, maintain safe speeds for the conditions, etc., but it really comes down to using your head.

Revolution Performance Marine founder Steve Tripp is an example of what can go wrong when pushing the limits on the water. (Photo by Robert Brown.)

There’s no doubt many of you are smart about what you’re doing out there in your powerboat, but things seem to go wrong when the adrenaline is high and the limits are being pushed. Please keep that on the forefront of your decision making this boating season. Whether you’re in your offshore catamaran, twin-engine V-bottom, single-engine sport cat, deck boat, jet boat or pontoon boat for that matter, think ahead and keep the safety of your passengers and the people in the boats around you in mind.

I don’t know if this needs to be said, but because I just finished a Lake of the Ozarks Shootout tribute piece on the late Steve Tripp—the founder of Revolution Performance Marine who died in February while testing his 26-foot catamaran (read the story)—maybe it will help to think about Tripp and others we’ve lost lately such as Jeff Asbell and Brad Smith, who died in an accident at last year’s Lake Cumberland Poker Run.

Even if you’re racing—the risk is higher, of course, because racing really tests the drivers and the equipment—the focus should be on safety. At the very least, safety checks need to be done and all of the proper safety equipment should be easy to access inside your boat.

I don’t enjoy writing about wrecks, crashes, accidents, what have you, but when I can report that everyone is OK—unfortunately you can’t always say the same about the boat—that makes it less depressing.

Even columns like this are not enjoyable to write, but it can’t hurt to be reminded of what can go wrong on the water when you’re out enjoying yourself or pushing your boat to its full potential.

Here’s to a safe boating season!