Using the Memorial and Labor Day weekends as starting and ending points, we’re a little more than halfway through the summer boating season, at least as far as organized events with significant charitable components go. And what an amazing season it’s been so far. 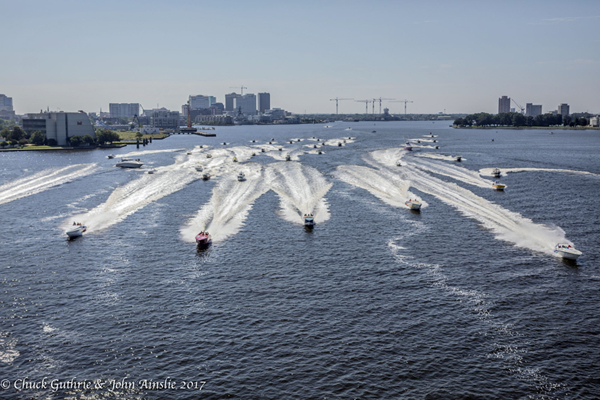 The Powerboating For A Cure Poker Run raised a combined $45,000 for two charities. Photo by Chuck Guthrie and John Ainslie.

Of course, there have been more—as in many—go-fast boating events benefiting worthy charities so far this summer. The list above is not intended to be comprehensive. It’s just a sampling.

The list leaves out, for example, all the powerboat owners in New Jersey who gave rides to wounded veterans during the Atlantic City Powerboat Rally and to physically and mentally challenged children and adults during the annual Shore Dreams for Kids event. It doesn’t count—because the final count isn’t in—the big money reportedly raised by Northern Michigan’s Boyne Thunder Poker Run for its Camp Quality and Challenge Mountain charities.

All apologies and thanks to, as well as endless respect and admiration for, the giving people involved with the charity-drive events not mentioned here.

Why focus so intently on the charitable side of the go-fast boating community? Because most folks outside that community don’t see or hear about it. They just see fast, colorful boats and characters who blow into town for summer weekend events and then make assumptions, too often less than positive, from there.

By the end of summer 2017, the list of worthy causes served by this community will be even more extensive. That’s a fact. And if the remarkable events just halfway through are anything to go by, it will be something to cheer.