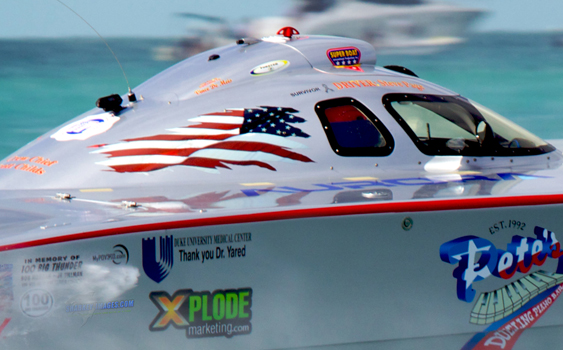 Regardless of varying opinions on the settlement in the Gratton vs. SBI case, the case is closed forever. And it’s time to move. (Photo by Tim Sharkey/Sharkey Images.)

That’s my take on the recent settlement among all parties in the Gratton versus Super Boat International lawsuit in Fort Lauderdale, Fla. Including watching every moment of the civil jury trial online via Courtroom View Network, I covered this story from the day Joey Gratton died in November 2011 during the Super Boat International Offshore World Championship in Key West, Fla. Covering the story for the past three years, I produced more than 15 news pieces on the subject.

The case ended suddenly on Tuesday, January 20 with a settlement after just four days in front of the six-person jury. And justice was served.

I believe that not because I have opinions worth sharing—for even those who didn’t watch a moment of the trial, much less research the case before it ever went there including reading a slew of depositions, have opinions—on the case. (In the three words that begin this piece, you have all the commentary I will ever make on it.) I believe that because I have deep faith in our civil justice system. Imperfect as it may be, I believe it is the best such system in the world. In fairness, I say this without ever having covered a trial in another country. But I believe in what we have because I’ve seen it work.

Reducing the settlement in the Gratton vs. SBI case to a cliché such as “the lawyers won” is oversimplification at best. Our civil justice system allows for cases to be won, lost or settled with monetary rewards, damages, settlements–or whatever term you prefer–at stake. To question “what good” such payouts do is fine—questions of that kind are common and they do no harm. But generally speaking, those questions tend to be rhetorical. What those monetary sums represent to a plaintiff or a defendant is the business of those parties, and while again it’s just fine to ask the question it’s arrogant to presume we know the answers.

To paint a plaintiff as “greedy” or a defendant as “buying his or her way out of trouble,” especially with a settlement of an undisclosed amount is—unless you’ve discussed it in depth with the parties involved—a pretty big and, to my way of thinking, inappropriate leap.

To put a fine point on it: Vilifying Priscilla Gratton–and shame on those folks who attacked her personally on this site’s message boards–for bringing suit wasn’t just wrong. It was indecent. Not because of the merits in her lawsuit one way or another, but because doing so was her legal right under our civil justice system. Forget her loss, forget her feelings—it was her right under our civil justice system. Simple as that.

You may not agree that justice was served. That’s your right, as it is mine to make that statement—one I’ll never go beyond. But what we can agree on is that the Gratton vs. SBI case is closed. And from here, we need to heal and move forward. Whether we agree or disagree, we can shelve all of it forever because whether or not we like how this story ended, it ended. We have closure.

And that’s something I believe we’ve all been craving.