You are at:Home»Racing»The 200-MPH Club 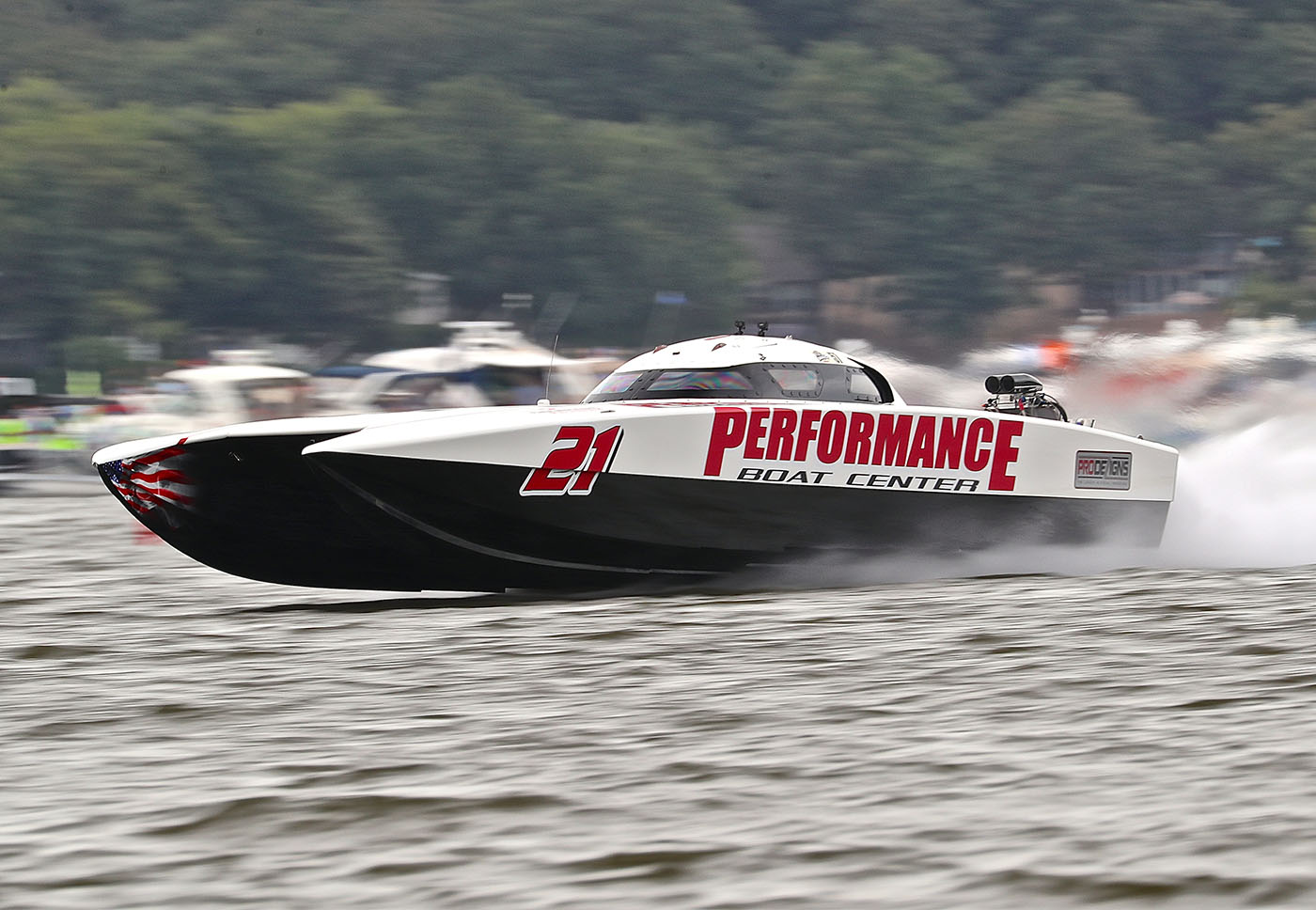 Just a few days after laying down an impressive 173-mph top speed in the Lake of the Ozarks Shootout, Myrick Coil and Rusty Williams piloted the Performance Boat Center 38-foot Skater catamaran to 205 mph. Photos by Pete Boden/Shoot 2 Thrill Pix.

Coil described the 205-mph run, which covered three miles on the Lake of the Ozarks in Central Missouri, in the Performance Boat Center Skater Powerboats 388 catamaran, iits former raceboat. The boat currently is owned by Skaterfest organizer Ron Szolack, who ran it with Coil to 173 mph during the recent Lake of the Ozarks Shootout, and powered by 1,700-hp Sterling Performance engines, as a “Sunday drive.”

Typical to his Midwestern roots and decidedly chill demeanor, Coil, who previously shared a cockpit with Scott at more than 200 mph and throttled the 38-foot Performance Boat Center Skater with Williams behind the wheel, was understating things. Because no matter how well it goes, running 200 mph in a powerboat never is a Sunday drive. At that speed, a boat covers 293 feet per second on a constantly changing surface.

Running 200 mph on the water is a tall and very dangerous order, which is why so few people—despite more than a few unsubstantiated claims—have done it. Even for the likes of John Tomlinson, a renowned throttleman who shares the cockpit of the Performance Boat Center team’s MTI catamaran with Coil, it’s an extraordinary feat.

“I’ve done it in four different boats,” Tomlinson said. “Three of them were with Dave Scott in three of his boats, one was in John Roth’s Skater 388 catamaran. But I have run another four or so boats in the 190s.

“Reading the conditions way out front and being ready to respond ahead of time is the most important thing because you can run up on something so fast at that speed and you need to be way ahead of it,” he continued. “Also I need a perfect-handling boat that I feel I have full control of so I can be confident it won’t get away from me. And you want to keep the boat tight and know how it feels before you blow it over.”

Even a minor mechanical issue at that speed could prove catastrophic, according to Tomlinson. If self-preservation is a goal, experience is crucial.

“Seat time and more seat time is so important,” he said. “After 150 mph, every 10 mph above has a different feeling. You don’t just want to go out there and just wing it thinking this is an easy thing to do.” 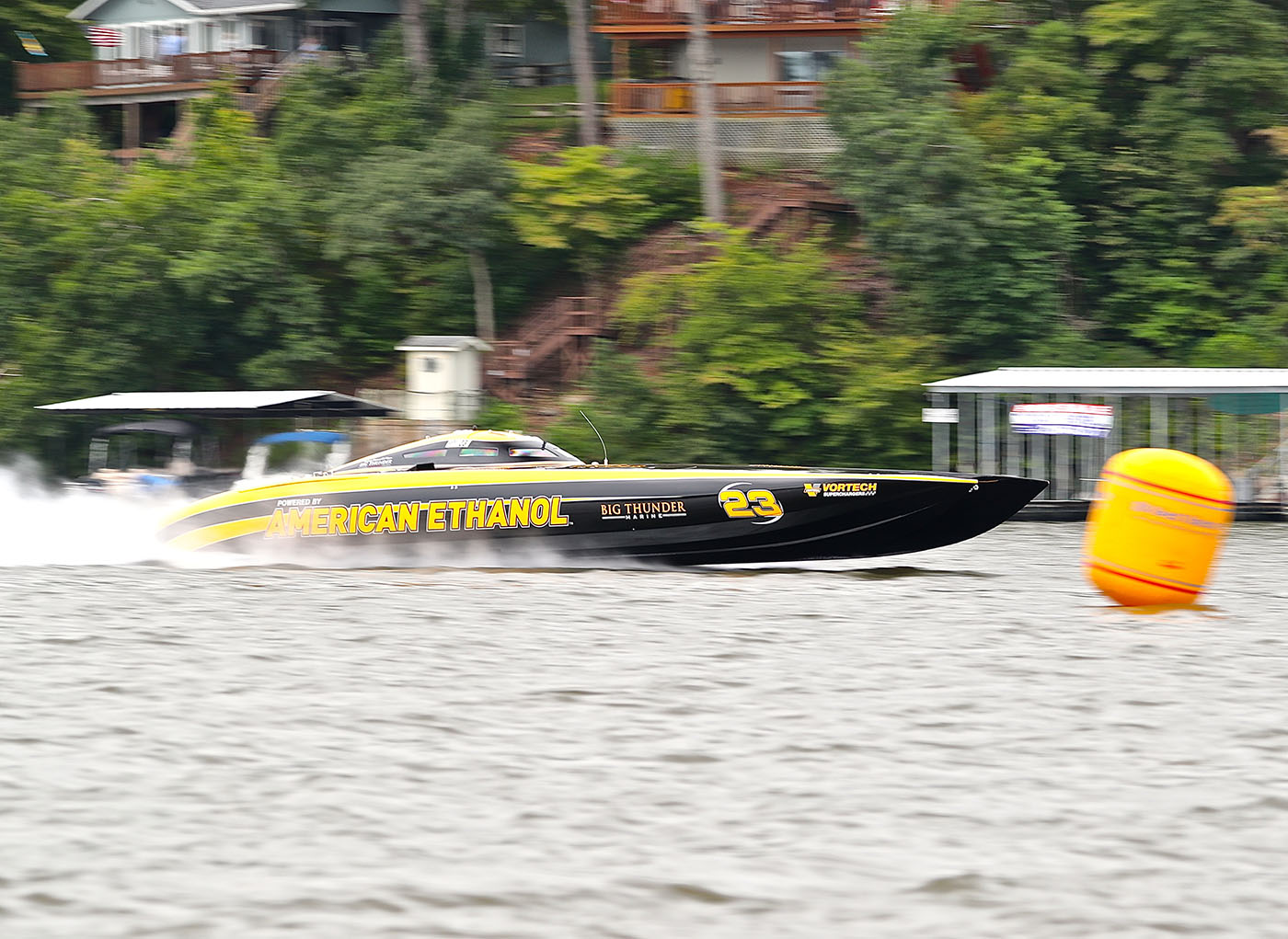 While Coil and Williams accomplished the feat after the recent Lake of the Ozarks Shootout, Tomlinson and Scott did it during the top-speed competition when it was held on a one-mile course. But only Cosker and driver Tony Battiatio have reached—and exceeded—200 mph on the event’s current three-quarters-of-a-mile course.

“Running American Ethanol is like a controlled explosion,” said Cosker of the 51-foot Mystic catamaran he has throttled several times to more than 200 mph during the Shootout. “There’s nothing like it and it is totally addictive. I would love to stretch it out for a couple miles and see what it could do.

“Running 200-plus mph requires total focus and tunnel vision,” he added. “The faster you go, the slower you move.”

Now Coil and Williams—the newest member of powerboating’s most exclusive club—know exactly what he means.