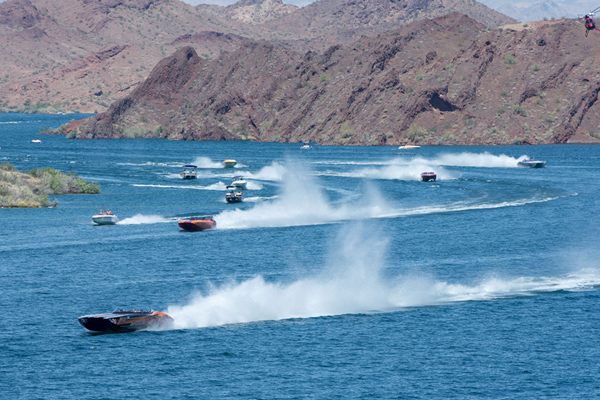 With the biggest events of May including Desert Storm (above) in the books, the go-fast boating event season goes into high gear next month. Photo by Erick Bryner/Firedrill Productions.

Early last week, I got a call from Jason Moe, the owner of a jaw-dropping 2016 Outerlimits SV 50 sportboat. Moe and his wife, Laurie, their 14-year-old daughter, Katelin, and Colton, their 11-year-old son, live in the Seattle, Wash., area, which means local organized go-fast boating events are few and far between. For that kind of action, they have to hit the road.

Case in point: During the Desert Storm Poker Run in Lake Havasu City, Ariz., a couple of weeks ago, Moe graciously invited me for some late afternoon fun on his 50-footer with his beautiful family. But between spending the morning and early afternoon on an Outerlimits SL 52 owned by Daniel Hafid of Newport Beach, Calif., and some pesky work obligations that refused go away no matter how much I ignored them, I had to beg off.

Moe was as bummed out as I was that we did not get the chance to enjoy Lake Havasu on his boat together, so he called to reschedule. The good news, which we figured out during the call, is that the Moe and Trulio families are staying in the Boyne City, Mich., area for the week leading up to the Boyne Thunder Poker Run in early July and we’ll get to take that boat ride together. We’ve already made tentative plans.

That got me thinking, not so much about how much fun Boyne Thunder is going to be but about all the worthwhile performance boating events between now and then. With May’s biggest happenings—the Tickfaw 200 Poker Run and the Desert Storm Poker Run in the books—and just eight days remaining in the month, things get busy in June with a slew of poker runs and rallies on the calendar. Given how dispersed these events are around the country, there’s likely one going on near you.

I won’t even get into July, which is even more packed with excellent events. Just digesting the happenings of June makes my head hurt, at least when I think about the task of trying to cover them.

But it also makes me happy. Yes, I’ve heard the argument that there is too much going on with too many overlapping dates on the go-fast boating calendar each season. (In the case of Desert Storm and the Tickfaw 200, the date overlap really did create conflicts.) But while I appreciate those concerns when it comes to major events, I appreciate the array of smaller-event choices for members of the go-fast powerboating community even more.

June is loaded with such choices. So get ready for a booming start to the 2017 season.