You are at:Home»Awesome»Shorter Shootout Courses: Causes And Effects

Just a few years ago, Tomlinson reached 197 mph in this Skater 388 catamaran during the Lake of the Ozarks Shootout. Photo by George Denny.

No stranger to top-speed contests, John Tomlinson, who ran 197 mph a few years ago in an open-cockpit 38-foot Skater catamaran at the Lake of the Ozarks Shootout, didn’t hesitate to answer when asked what he thought about this year’s shorter courses for three such events.

“The Skater I went 197 mph in on a one-mile course will probably be 15 mph slower on a three-quarter mile course,” he added. “But that’s OK.”

As reported on speedonthewater.com in late 2016 (read the story) the organizers of the Lake of the Ozarks Shootout in Missouri, the GLOC Performance Boat Challenge in Oklahoma and the Texas Outlaw Challenge agreed to shorten their one-mile courses to three-quarters-of-a-mile in the interest of safety this year. Worth noting is that all of those events have excellent safety records. Still, with the deaths of top-speed shootout veterans Garth Tagge and Jim Melley during an event in Maryland last year, the organizers said they felt that a change was needed.

Without question, the shorter courses will result in lower top speeds when it comes to the catamarans and V-bottoms that are still pulling at the end of the course. For the majority of boats that compete in shootouts, however, it won’t matter as they reach their top end early on the course. For the fastest of the fast, setup and strategy will become even more important, according to Tomlinson, than they already were.

“The smaller V-bottoms, cats and pontoons are easily up to their speeds in three quarters of a mile, maybe even less, so the shorter course won’t make much of a difference to them,” said Tomlinson. “But for the bigger, faster boats it will be more like an offshore race. Now you have to figure out, ‘Do I run a smaller propeller to get up to speed or do I use a bigger wheel and hope I’m pulling at the end?’ 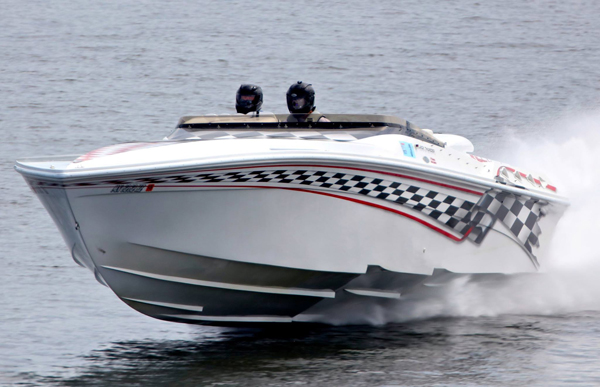 “For the boats that need more room to run, for sure, you’re definitely going to see slower speeds regardless,” he continued. “It’s hard to say the shorter courses will have a greater effect on the V-bottoms or the cats, but I would think it would affect the cats a little more.”

Among those boats that need “room to run” is Dennis Parvey’s 43-foot Black Thunder, which he runs with his son, Jason. In last year’s Lake of the Ozarks Shootout, the boat reached a jaw-dropping 165 mph and was “still pulling hard,” according to Jason, at the end of the one-mile course.

Should the Parveys decided to compete at this year’s Lake of the Ozarks event—and they’re currently undecided—they know they’ll see less top end than they did last years.

“You can’t just put the throttles down and hold them,” said Jason Parvey. The boat has a mid-range hop between 80 and 120 mph. Once you drive through that, you can get on it.

“I’ve talked to a lot of V-bottom guys and they didn’t think the shorter course will affect us as much as the catamaran guys, but we really don’t know what to expect,” he added.

Parvey confessed that’s been “getting the itch” to compete at the Lake of the Ozarks Shootout again, and if the conditions are ideal he and his father might just make a few passes down the shorter course this year. Like Tomlinson, he said he believes the competition will still be tough despite lower overall top speeds.