You are at:Home»Awesome»Sunday Afternoon Fever

Actor John Travolta and TNT Custom Marine’s John Tomlinson took to the waters of Biscayne Bay a couple of weeks ago in an MTI-V 42 performance center console.

You know John Tomlinson because you’re a performance-boating enthusiast, and Tomlinson has a resume — from offshore racing to the marine industry itself — that just won’t quit. But outside the go-fast boating world, he’s anything but a household name.

On the other hand, you know John Travolta — one of the most successful screen actors in history — because you’re not living under a rock. From disco dancer to mechanical bull rider to hit man to fallen angel, Travolta has created an array of memorable movie characters.

So what do these two stars have in common have beyond their own first names? Thanks to Travolta’s research for an upcoming motion picture on the life and times of Don Aronow called “Speed Kills,” Johnny T and, well, Johnny T spent most of a Sunday together a couple of weeks ago.

Travolta was, of course, doing research for his role as the famed performance-boat company owner from New Jersey. One contact led to another, and eventually Tomlinson received a call from a Travolta representative. A couple of Sundays later, Tomlinson picked up the actor from a hotel in Miami. They chatted for a bit then headed out in a Marine Technology, Inc., MTI-V 42 performance center console — a customer’s boat that he had in the shop — for a few hours. 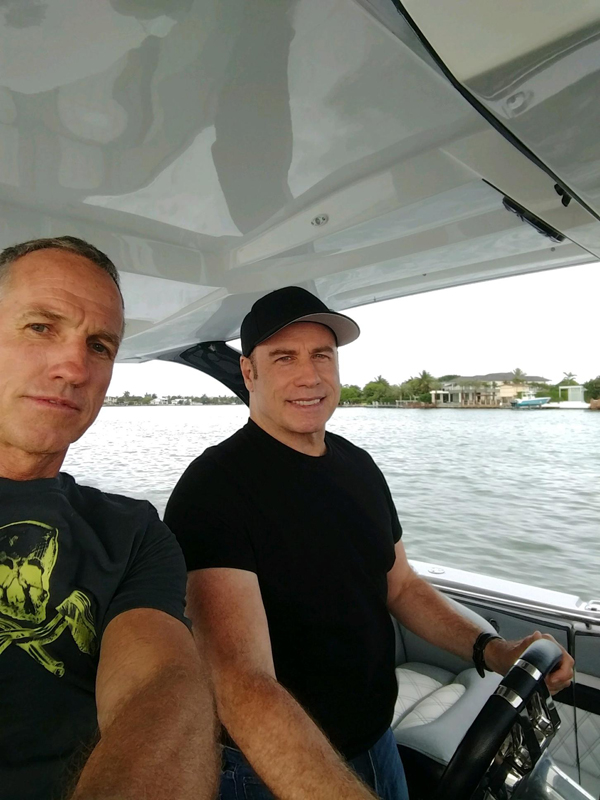 Said Tomlinson, “We had a good conversation about boats, careers and family, and I was able to introduce him to Donna and our family.”

“He was a super gentleman and just a really nice guy,” said Tomlinson. “He was very curious about how I came to do what I do. We had a good conversation about boats, careers and family, and I was able to introduce him to Donna our family”

Why the center console rather than, say, a Cigarette or Donzi or a Magnum sportboat? “It was the most relevant boat I had access to that day,” said Tomlinson. “I called my customer to ask him if we could use it, and he said, ‘Sure, but can you get me a picture of you and John Travolta in it?’ When I asked John, he said, ‘No problem, absolutely.’”

Tomlinson doesn’t know if he’ll meet Travolta again, much less work on the “Speed Kills” movie. His last motion picture boat-driving gig was for director Michael Mann on the “Miami Vice” remake, which managed to disappoint high-performance boating enthusiasts and the general public. Before that, Tomlinson had done “small stuff’ for a television program. And he’s turned several movie boat-driving jobs during the years simply because they didn’t fit into his work schedule and commitments.

“When we were done, I told John, ‘You know where to find me if you need more information,” said Tomlinson, “He said, ‘That I do.’”