You are at:Home»Can't Wait»DCB Set to Raise the Bar Again 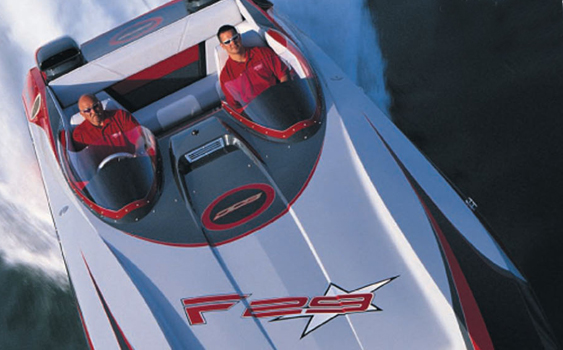 With its highly anticipated M41 Widebody catamaran nearing completion, there are a lot of eyeballs on Dave’s Custom Boats (DCB). But that’s OK with Dave Hemmingson and the rest of the crew at DCB. In fact, they thrive on it and are always trying to take their boats to the next level.

As the sophisticated 41-foot catamaran enters the beginning stages of rigging this week, Hemmingson said he can’t wait to show it off at the company’s ninth annual regatta at the Nautical Inn Resort in Lake Havasu City, Ariz., on September 28-30. Hemmingson is expecting a great turnout for the regatta, which is being billed as a Tailgate Party Weekend thanks to its sports theme. (If last year’s rock ‘n’ roll theme is any indication of the DCB contingency’s creativity, this year’s banquet should be quite entertaining.)

Although a lot of attention has been directed toward the company’s Widebody M Series models, DCB still builds its F Series models—the F26, F29 and F32, which is shown here on Arizona’s Lake Havasu. (Photo by Jason Johnson.)

“The [M41 Widebody] is going to be amazing,” said Hemmingson, who started the El Cajon, Calif., company more than 20 years ago and now co-owns DCB with business partner Rob Blair. “It has a full cap on it and is completely seamless. It’s unlike anything else out there. We’ve also started tooling our M29, which should start showing up in the first quarter of 2013. We’ve got a few on order, even one that’s going to have twin Mercury Racing OptiMax 300XS outboard engines.”

Although much of the attention falls on the wildly popular M31 and M35 Widebody models and their two upcoming siblings, Hemmingson confirmed that DCB still builds its quarter-canopy-style F Series catamarans, which include the F26, F29, and F32, along with the F30 SportDeck. While the F Series models stand up against any boat on the market when it comes to performance and quality, it’s tough to believe they play second fiddle to the M Series when it comes to the DCB lineup.

But as Jeff Johnston, director of sales and marketing for Hering Propellers, has witnessed over the past decade, the DCB brand never stops evolving. And he’s seen it from the ground up. Johnston, who was an integral part of Powerboat magazine’s advertising staff and test team for many years, worked at DCB for about a year and a half while he was attending San Diego State University more than 10 years ago.

“When I worked [at DCB], Dave was still building the F-34, which at the time was a big deal,” said Johnston, adding that a majority of the boats DCB built back then were 22- and 26-foot cats. “That was DCB’s first entry into the big boat stuff, and it was their first boat with quarter canopies. They’ve certainly come a long way.”

Johnston remembers one of the company’s first twin-engine F-29 catamarans, dubbed Pegged, and how it blew away the Powerboat Test Team at the magazine’s annual Performance Trials with its performance, not to mention its perfection in the rigging department.

“When the Pegged boat came to the test, we thought ‘That’s it. Game over, it doesn’t get any better than this,’” Johnston said. “Yet somehow Dave keeps innovating. Right when you think he’s nailed it, he goes and sets a new benchmark. Whether it’s canopy design, different poker run seating, better ergonomics, or little custom touches like speedometers in the headrest or handles in the gunwales, he just keeps raising the bar.” 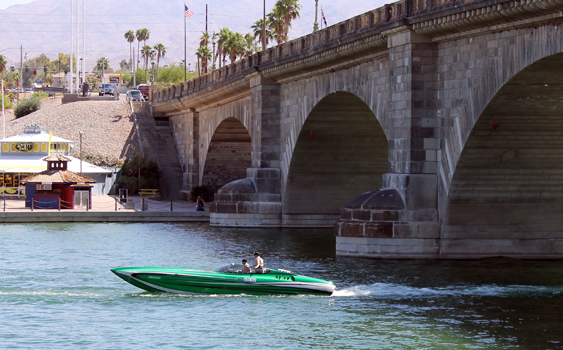 Johnston continued, “The M Series is a perfect example. I’m excited to see how the M41 runs. It looks amazing, but I’m not surprised considering it’s from DCB. It’s interesting that the company’s ‘entry-level’ model could be the new M29. But that’s what happens when the customer base outgrows your smaller stuff.”

One thing’s for sure, Johnston—and everyone else in the business—can hardly wait to see what the crew at DCB comes up with next.