You are at:Home»In Memoriam»The Tale of White Lightning 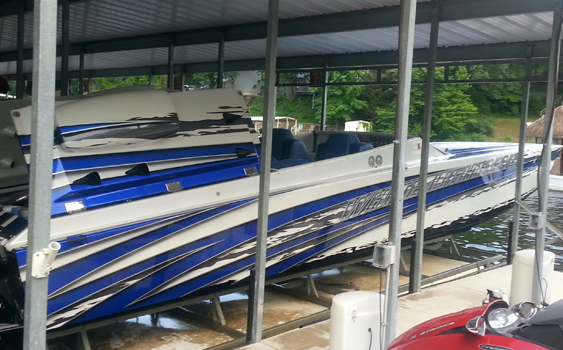 For Travis Reed and the late Brad Smith, White Lightning was a labor of love for 10 years.

Right now, there’s a covered 41-foot V-bottom called White Lightning sitting on a boat lift in front of a modest shoreline condominium in Osage Beach, Mo. Well known locally on the Lake of the Ozarks, the 13-year-old boat rides on a Kevlar and carbon fiber hull with a custom-built deck from Steven Yadvish of Northcoast Yachts in Seattle. It is powered by a pair of 1,300-hp, 588-cubic-inch supercharged engines from Brad Smith Power in Joplin, Mo.

And right now, the 41-footer is a source of conflicting emotions for its owner, Travis Reed. That’s not just because Reed, who is in the commercial and industrial construction business, knew Brad Smith, the noted 39-year-old engine builder who died earlier this month in an accident during the Lake Cumberland Poker Run, and considered him one his “best friends.” It’s because White Lightning had been a labor of love and a source of joy for Reed and Smith for the past 10 years, and they finally finished it this summer. In a way, they both owned White Lightning.

“I haven’t touched it since Brad’s wreck,” says Reed, who struggles to maintain composure at the mention of his late friend’s name. “I haven’t been back to the lake since then.”

Reed bought the boat from its former owner in Pompano Beach, Fla., ten years ago. It was built in 2000 and had seen its share of Atlantic Ocean running time.

“When I got it, the boat had Mercury Racing 1000 motors and one of them was in really bad shape,” he recalls. “Brad and I had been friends for a long time before the boat thing, so I called him.

“We were really young then, and it seemed like a lot of boat,” he continues. “Brad and I pulled the motors out of it. I was on a shoestring budget—I was married and had two kids, so we did everything in stages. We fixed one of the motors and ran it for a year, then we took them out and turned them both into 557s. A few years later we made them into 588s, and they made right around 1,200 hp.” 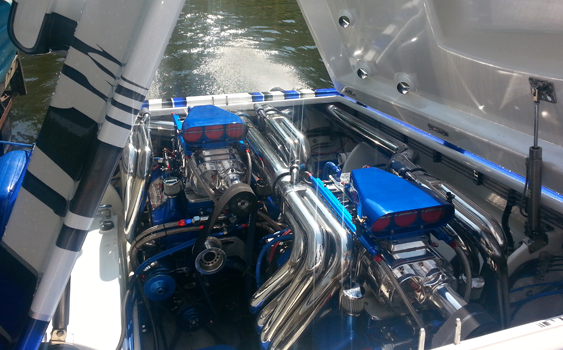 For the cosmetic work that he and Smith couldn’t handle, Reed turned to outside contractors, such as Mark Morris of Visual Imagination for new graphics and an interior restoration expert that Morris recommended. But from the engine rebuilds to re-rigging, Reed was as involved as could be—with Smith, his friend and mechanical mentor, teaching him and overseeing everything he did.

Last year, Smith and Reed repowered White Lightning with a new pair of supercharged 588-cubic-inch engines—the engines in the covered boat sitting on the lift in front of the condo on the Lake of the Ozarks Shore—based on Dart blocks. 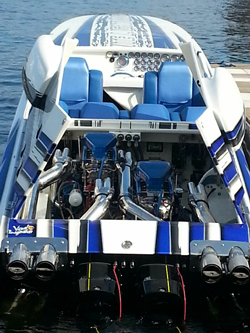 Inside and out, White Lightning has been completely restored since Reed bought it ten years ago.

“I turned every nut and bolt on those engines with Brad watching me and guiding me,” says Reed. “I spent my working hours at my regular day job in Kansas City, and the rest of my hours at Brad’s shop in Joplin. I could not have done any of it without Brad. His dad ‘Pops,’ Bob Smith, hammered all that knowledge into him, but with fuel injection and computers Brad took it to the next level. He kept up with technology.”

Anything for a friend. For Reed, that meant giving one of the eulogies at his friend’s funeral. “I wanted to tell you how proud Pops must truly be because he was the mastermind behind his son’s success,” Reed wrote in his remembrance of Smith. “Pops would always say it was a good day in the shop for big-boy power when Brad was ad-libbing any song that came on the radio. Boy, could he spit it. What’s more amazing was that the same song would come on the next day and he would have completely new lyrics—and man if you were lucky enough to hear the late-night versions. They were off the hook, just like Brad Smith Power.”

And now White Lightning, the boat that cemented a powerful friendship between two men sits covered on a lift in front of the waterway where they ran it together for many hours during the last 10 years. Devastated from the loss of his friend, Reed thought about selling the boat. But he knows he can’t.

“For Brad, I’m keeping it for Brad,” says Reed. “I couldn’t get out of it now. I am not Brad Smith—I build high rise buildings for a living—but I really think he taught me enough to keep it going. I want to keep it going for him.”