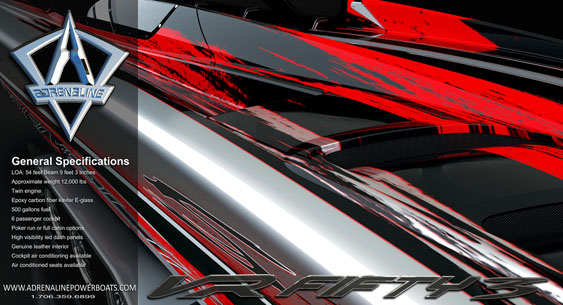 The last time I corresponded with Mike Layton was not long after we tested one of the exotic-looking twin-engine V30 models from his company, Adrenaline Powerboats, for a Powerboat magazine test. That was early 2008 and we all know what happened shortly thereafter—the economic downturn took its toll on many manufacturers as well as the iconic magazine (which eventually went out of business in 2011).

In what turned out to be a pretty smart move, Layton laid low for a few years, building a handful of the 30-footers, handling some restoration projects, including the makeover of Hulk Hogan’s 38-foot Scarab in 2011, and maintaining a focus on the next generation of Adrenaline Powerboats.

After noticing the “Design Visualization by Mike Layton” credit on the Mystic Powerboats 40 rendering in Matt Trulio’s “Mystic Returning to Miami” story, I reconnected with Layton to find out how things have been going. Based on the amazingly realistic appearance of the new 40-foot catamaran in the photo below,  I wasn’t surprised when he informed me that his latest specialty was in-house 3D design and visualizations that render images with full graphic overlay of the model, making it possible to render the paint scheme from any angle with a ton of realism. 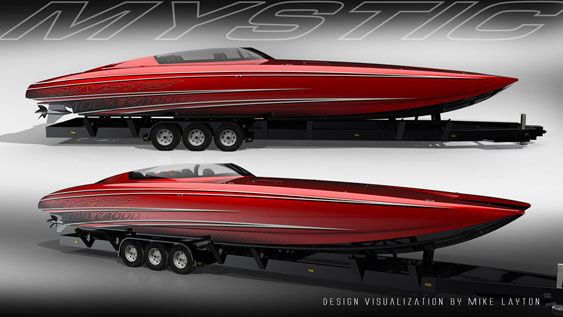 Layton, who has designed and painted all of the Adrenaline boats to date, said the days of flat 2D paint schemes are a thing of the past, “at least for us and those who use our services,” he added. And while he offers his company’s services to other manufacturers of boats, super trucks and more, the development of new Adrenaline models has been his primary focus as of late.

“I basically hit the restart button and took a long, hard look at what we should be doing,” said Layton, who is married to his high-school sweetheart Robin and has five daughters. “I wanted to make sure the next thing we did was notches above anything we’ve done in the past. I think the timing is right to move forward with some groundbreaking new models.” 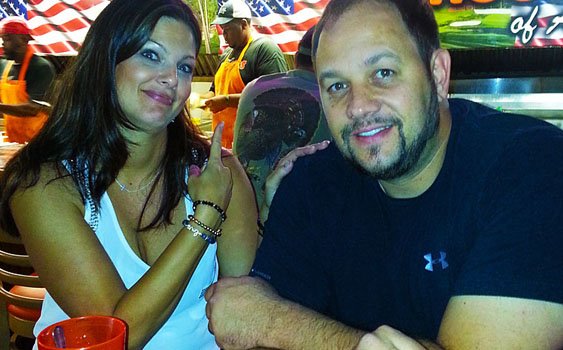 High-school sweethearts Mike and Robin Layton enjoy date night at Hooters—Robin’s first and most likely last time at the restaurant, according to Mike.

According to Layton, who broke ground on a new building in Lincolnton, Ga., in 2012 and moved into the high-tech facility on 13 acres on Lake Thurmond last summer, Adrenaline has a super-sleek 29 RZR in production as well as a low-slung VR 32. The new 32-footer has been ordered by a customer in Dubai—the same customer who ordered the company’s first VR 53, which Layton expects to start tooling in March. He said twin naturally-aspirated Ilmor Marine MV8 570 engines will power the VR 32 and a pair of Mercury Racing’s turbocharged 1350 engines will provide more than adequate power for the VR 53.

He’s not offering much more information on the new models yet—he’s waiting until the boats are further along and his website is redesigned—but it’s easy to see that Layton is excited about Adrenaline’s future.

It’s also clear that he’s enjoyed working with John Cosker and is excited to have the owner of Mystic providing input on the VR 53, which will be constructed with carbon fiber/Kevlar and epoxy. 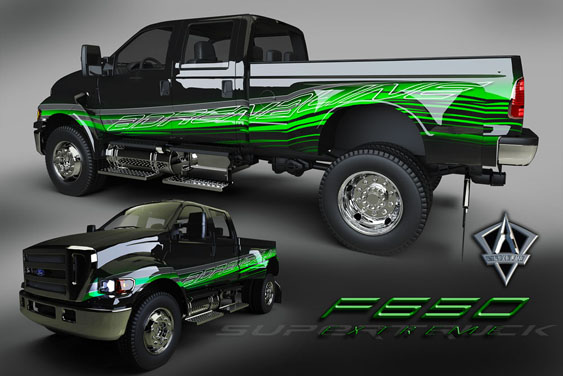 Thanks to the 3D renderings provided by Adrenaline Powerboats, this F650 design produced for Extreme Supertrucks looks extremely real.

“It’s kind of a funny story because Mike called me, and he caught me on a bad day so I totally blew him off,” Cosker said. “I get people all the time calling me to try to sell me on their rendering capabilities even though we do a lot of that stuff in house. Anyway, Mike followed up and sent me a really nice email as well as some renderings of his 53 V-hull. I was blown away by it. The way he did the boat, the trailer, everything about it was so real.

“I responded and told him I’d like to do something so we got him involved with the new 40 we’re building,” he continued. “I loved the renderings he sent me; until I have one built, they will be great sales tools. I also told Mike we’d lend whatever help we could on his new 53.”

While earning respect from an accomplished colleague like Cosker has been pretty significant, it only confirms that Layton made the right decision staying in the boat-building game.