You are at:Home»Industry»Catching Up With Ron Potter 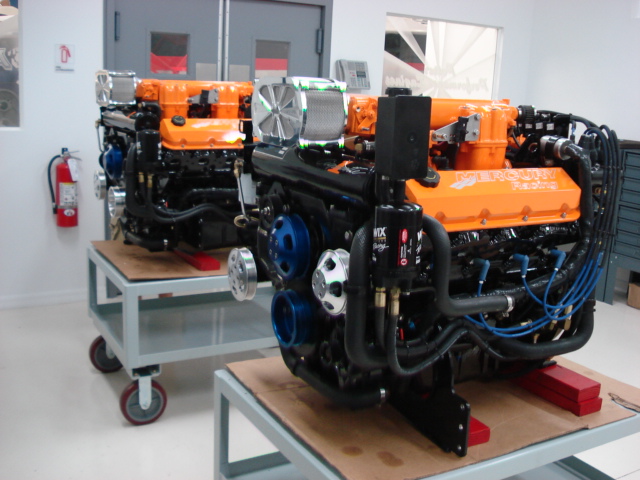 Several years ago, I had the good fortune to drive the famed Speed Racer Marine Technology, Inc., catamaran with Bob Christie, the owner of the 44-footer, handling the throttles. One moment we were scooting down the Intracoastal Waterway—destination Islamorada, Fla.—at 100 mph, the next we were up to 140 mph. The boat was powered by a pair of supercharged Potter Performance Engines making north of 1,300 hp per side, and Christie had blipped the throttles.

So like most folks, let’s say anyone who’s ever visited the Bradenton, Fla.-based engine builder’s website, I tend to associate Potter Performance Engines with big-horsepower exotic marine powerplants. And while company principal Ron Potter certainly can deliver just that, the simple truth about his business is that it’s become based on rebuilding much milder engine stuff from MerCruiser 350 Mags to Mercury Racing 1075s.

“What’s been really big in the past few years have been the rebuilds of MerCruiser 350s, 454s and 502s, and Mercury Racing HP500s, 500EFIs, 600s, 700s and 1075s,” said Potter. “That’s a big part of our business now. Those fancy motors you see on our website? They’re a much smaller part of our business. The big-horsepower engine buyers just aren’t there the way they were six or seven years ago.” 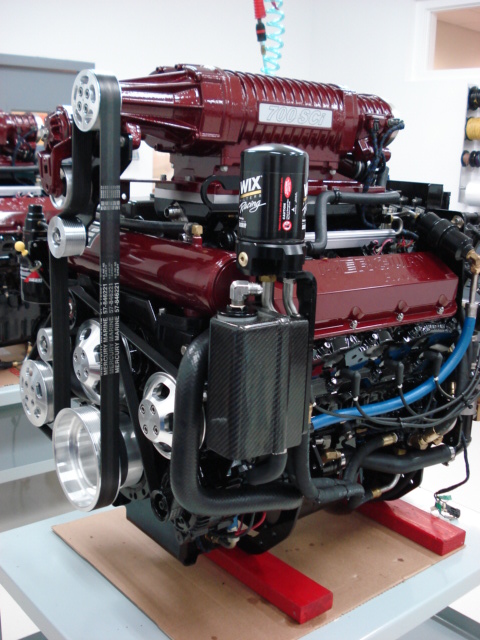 Said Potter: “We have a rebuild package price for every MerCruiser and Mercury Racing engine we handle, and our rebuilding include repainting.”

In recent years, Potter took on complete powerboat service and restoration to augment his business. (His stunning restorations of a 38-foot Cigarette Top Gun for his personal use and refurbishing Christie’s 42 X Cigarette interior were well-chronicled in Speed On The Water digital magazine.) While he’ll still do that kind of work for his existing engine customers, he’s leaning away from it these days. He’s too busy rebuilding engines.

“We have a rebuild package price for every MerCruiser and Mercury Racing engine we handle, and our rebuilding includes repainting—we have our own spray booth,” said Potter. “We send all of our drive work to TNT Custom Marine in Miami. They give us good prices and we’re able to pass on those savings to our customers. We haven’t finished our dynamometer cell—we still lease dynos—but we did spend the money to purchase a Magnaflux machine and we Magnaflux everything.

Throughout the rebuild process of every engine, Potter takes digital images. Worn parts, new parts, machine work—everything is chronicled for the client.

“Everybody likes to look at that stuff,” he said. “Plus, when the client goes to sell his engine he can show it all to the buyer.”

With rebuilds of out-of-warranty MerCruiser and Mercury Racing engines come the opportunities for clients to upgrade their power. Potter provides several options for each engine he takes in, as “every engine is different and every budget is different.” For owners of naturally aspirated engines who want to keep those engines naturally aspirated, he always insists on upgrading from the engines’ stock exhaust systems.

“It doesn’t stop at the motors,” he said. “Naturally aspirated engines have to be able to breathe—it’s a major part of the upgrade process. A supercharged engine is not as subject to issues with scavenging and such, so they can often get away with stock exhaust. But we never sell an engine upgrade without having that conversation.”

Given the direction of his business, it makes perfect sense that Potter continually adds equipment to his machine shop—he actually takes in machine work from other engine builders in the area, yet another reason his Magnaflux investment has paid off. But lest you think he’s knee-deep in rebuilding mild MerCruiser engines and nothing more, one of his current projects has him upgrading twin 850-hp engines to the 1,200-hp range for a client who owns a 36-foot Nor-Tech catamaran in the British Virgin Islands.

“We’ve been busy as heck with the rebuild business, that’s for sure,” said Potter. “I believe that whether you originally build or rebuild an engine, it should last a long time.