You are at:Home»Legends»Who’s The Real King? 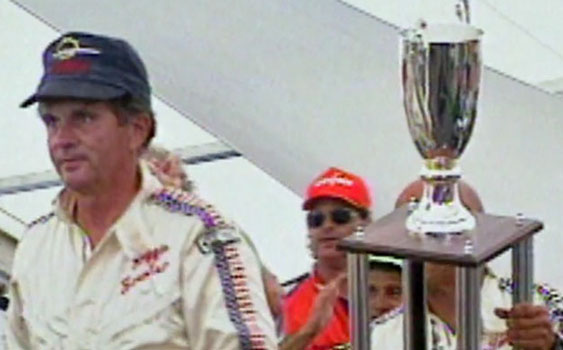 From tunnel boats to offshore racing machines, Fountain was a relentless competitor.

My educated guess is that by the time most of you read this you’ll have already watched “King of Offshore: The Reggie Fountain Story”, a documentary that is scheduled to air tomorrow, December 23, on NBC Sports at 2:30 p.m. EST, according to American Performance Media’s John Potts, who led the project. And so will begin the endless and perhaps pointless—but good fun nonetheless—debate on who holds a greater place in high-performance powerboating history, Reggie Fountain or Don Aronow.

While there’s there plenty of debate on how and why Fountain, who started Fountain Powerboats, and Aronow, who founded Cigarette Racing Team, Donzi, Formula, Magnum and other brands, reached legendary status in the performance boating world, only a fool would argue that neither man deserves recognition. But the gray area between “how” and “why” is mighty wide, so in the interest of advancing the discussion I asked a few respected friends in the realm who they thought might be “King.”

And that’s where the fun began.

Being an engineer and a businessman with a master’s degree in business administration, Fred Kiekhaefer, the former president of Mercury Racing, took a more analytic/accounting approach to the question.

“Either could wear that headgear! It depends upon your definition of ‘Kinglyness.’ Here’s my top ten list,” he said. “Ten—measured by the number of companies created, Mr. Aronow is the hands down monarch: Hunt, Formula, Donzi, Magnum, Cary, Signature, Cigarette, USA. Nine—Measured by the number of boats produced by any one brand, Mr. Fountain gets the crown. Eight—measured by the number of personal offshore racing victories, I don’t have enough fingers and toes to do the math so it could go either way, but I think Reggie edges Don. Seven—in tough, old school, big water races, Don edges Reggie. Six—by number of wives, Reggie. Five—by number of girlfriends, Don. Four—lifetime payroll created, coin toss. Three—lifetime profit contribution from marine purchases, which is my favorite measure, Reggie.  Two—the guy most likely to wear the King’s costume, Reggie. One—the guy I wish I looked like, Don Aronow.”

When also asked the question, Rich Luhrs, a longtime industry observer, offshore racing commentator and former go-fast catamaran builder added a wrinkle to the discussion. “Carl Kiekhaefer—without him, the others would not have had a sport and Reggie would never have existed,” said Luhrs. “Aronow made something from scratch—original designs. Reggie added a beak to an Excalibur and marketed the hell out of it.” 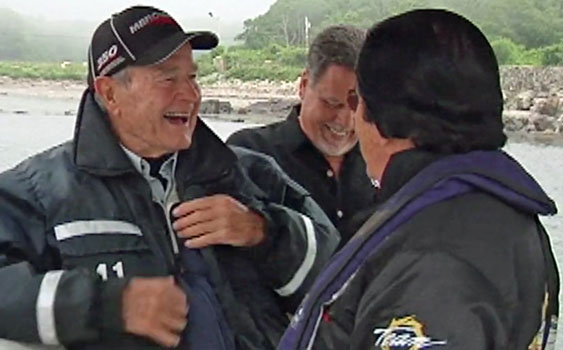 Both Fountain (shown here with George H.W. Bush) and Aronow built boats for dignitaries and celebrities.

Offshore racer David Scott, whose Nauti-Marine company at the Lake of the Ozarks in Central Missouri recently merged with Performance Boat Center, had a different take—with a short disclaimer. “It’s difficult for me to say because I’m not fond of the title for any one individual,” said Scott. “That being said, I would definitely say Reggie did more to promote offshore racing as we know it today.”

For some, like longtime performance-boat owner Bob Christie of New Jersey, the debate comes down to both substance and style.

“Both were successful in boat design and racing,” said Christie, the current owner of a 42-foot Cigarette V-bottom and the former owner of the famed Speed Racer 44-foot Marine Technology, Inc., catamaran. “But Reggie never stepped up and out of the backwoods reputation of North Carolina. Don was much more—he was educated , taught school and created a fantastic boat line that still outlives Fountain. The myth and class of Don was shown not only in his boats and their reputation, but also in his lifestyle. He married a socialite, hung out with the rich and famous. Of course, he also had friends that eventually cost him his life.

“I guess if I had to sum it up, I would have much rather been a part of Don’s world than Reggie’s,” he concluded. “I like Reggie but relate far better to Don. Reggie will always be a legend but Don is and was the reason Reggie even had an opportunity to be in the boat business.”

Could there be a middle ground? A division of contributions that leaves both Aronow and Fountain with the acclaim they’ve earned and their relative places in history intact? Of course there could.

“Don was the godfather of performance boats,” said Joe Schaldenbrand of Sunsation Powerboats, which along with Mercury Marine provided support for the documentary. “And Reggie is the King of offshore.”

For my part as a longtime industry observer, I won’t weigh in on this debate. I already know the answer. Because for me, especially around the holidays, there is but one true king—of everything.