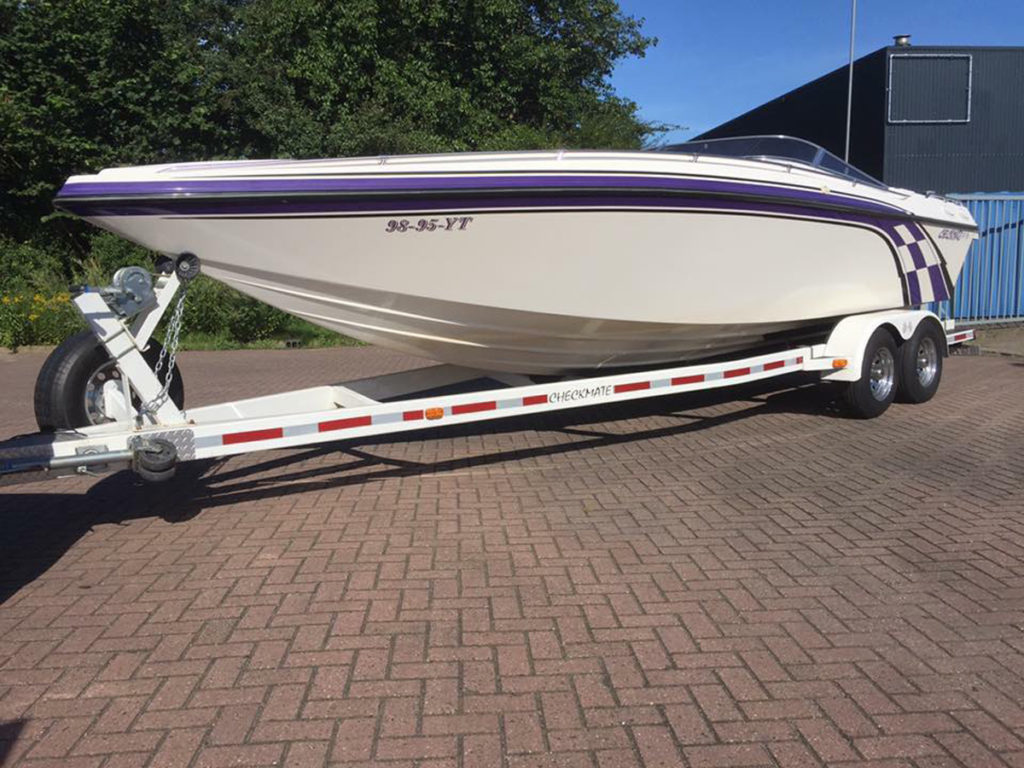 Helmich Hillen of the Netherlands campaigns this 27-foot Checkmate in two poker runs each summer in Sweden.

Did you know that Scandinavia has a vibrant poker run scene? Neither did I, at least until Helmich Hillen, who lives in the Netherlands and owns a 27-foot Checkmate V-bottom, reached out to me via Facebook during the holidays. Seems my “Is Boyne Thunder The World’s Best Poker Run?” column in December got his attention.

“My response to that is if you have time, check out some European poker runs,” Hillen wrote. “I know that is also in the same months as the U.S.A. poker runs, but maybe it can be a great article. Let me know what you think. The Scandinavian countries are quite big for poker runs. I go every year to Sweden for the poker runs over there.”

While Hillen’s English isn’t perfect, it’s better than a lot I’ve heard and read from native speakers in this country—and way better than my Dutch—so we had no trouble communicating. And I was surprised to learn that Europe’s hottest poker runs aren’t in the sexy Mediterranean but in its harsher northern environs.

“There are poker runs in Denmark, Norway and Sweden,” he wrote. “Holland has one, Germany three, Poland and Eastern Block have nothing. South on the Med, it is more the racing events that are hot. The U.K. is more into racing and RIB (rigid inflatable boat) rallies.

“There are no commercial parties involved in organizing poker runs here—mainly boating clubs are organizing,” he continued. “The only one is the Smogen Poker Run in Sweden, which has a commercial organization involved.”

Hillen said that in the absence of commercial poker run organizer involvement, European poker runs tend to be “very social events” with registration typically at $100 (83 Euros) per boat. Poker runs in Norway, Denmark and Germany happen on saltwater, whereas the events in Sweden happen on freshwater.

“For the scenery, every poker run has its charm,” he wrote. “But I like the lake runs in Sweden the most. It keeps the boat in better shape and you have the feeling of getting somewhere while running on the lake.”

To that end, Hillen participates in two poker runs in Sweden a year. Each summer, he also comes to the United States for annual Checkmate Owners Rally on Lake Cumberland in Kentucky.

“Mika, the Swedish poker run organizer, wants to involve more foreign people to let them know that there is a big powerboat scene over here, too,” he wrote.

Now that got my attention. So budget allowing—the schedule is only half the issue, but my new friend couldn’t have known that—I’m considering a trip to Sweden next summer to check out the poker run scene. Why not? Scandinavia is lovely in the summer.

I don’t know that anything I’ll find will change my mind about Boyne Thunder, but it’s my obligation as a hard-working journalist to check it out. (Insert wink here.) As my new friend Hillen from Holland reminded me, it’s so very important to be thorough.