You are at:Home»Projects»Deja Blue’s New Look

The first time I talked to Greg Dutka—the owner of Deja Blue, a cool Sunsation Boats 32 Dominator SS sportboat powered by a pair of MerCruiser 496 Mag HO engines—was for a story I did five years ago on Sunsation owners who embraced the boating lifestyle to the fullest. Dutka was the inspiration for my OffshoreOnly.com column that week at the end of October in 2014 because the Texas native, who is a Colonel in the United States Army, was stationed on the Hawaiian island of Oahu and took advantage of running his 2006 Sunsation around the islands.

Fast forward three and a half years and he and I connected again as he turned to Justin Wagner and the team at Waves and Wheels in Osage Beach, Mo., give the 32-footer a full interior overhaul and stereo system upgrade. What’s wild is that the mid-April column last year was the first time Dutka, who was stationed in Bagram, Afghanistan, at the time and is now back in the States in Maryland, got a glimpse of the finished product.

Obviously being that I write about performance boats and a lot of powerboat projects from Waves and Wheels, Boat Customs and a variety of other cool shops you can take your older boat to be made new, it’s not odd to follow a project like Dutka’s in various stages. And that’s exactly why Deja Blue is the subject of this week’s column.

Several weeks ago Dutka reached out to let me know he had the team at Maryland Offshore Performance Marine Center design and apply a new paintjob. 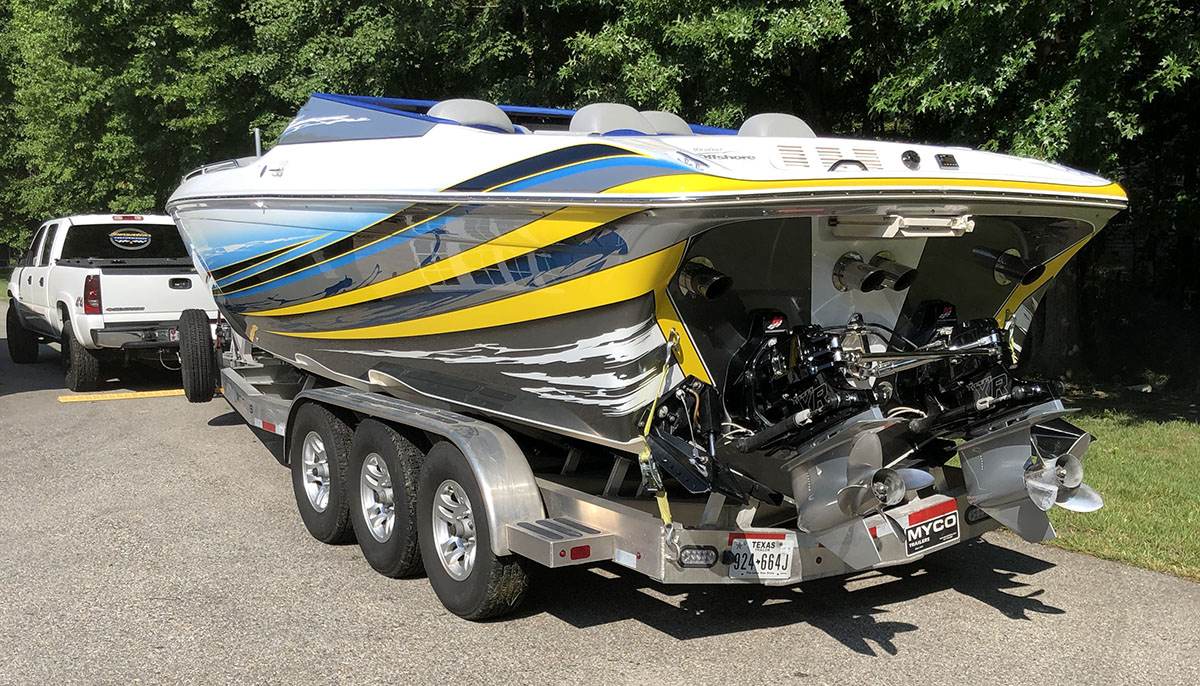 “In the year since I had the big reveal from the work that Waves and Wheels did, I took the Tres Martin Performance Boat School course, participated in the Texas Outlaw Challenge and relocated to Maryland,” Dutka wrote in an email. “With the new job, I basically put the boat away until November where I took her to Miami to run the Key West Poker Run with the Florida Powerboat Club. Amazing experience, of course. With winter setting in, I started talking with Andy (Imhof), Mitch (Kramer) and Chris (Dilling) over at Maryland Offshore Performance Marine Center about a full repaint to complement the awesome work from Waves and Wheels. After several months and numerous design reviews, I pulled the trigger on an incredible design that updates the boat and, I think, gives me a pretty special, one-off Sunsation Dominator.”

Imhof said Dutka seemed elated with the boat as he sent several texts of him having fun on it with friends. And now that the season has pretty much ended in the Northeast, Dutka is having Maryland Offshore do some more work to it.

“We’re re-powering and re-rigging Greg’s boat right now—he picked up some new 496 HOs,” Imhof said. “He was having some overheating issues later in the season and decided to start with fresh motors to go with his new look.”

The team at Maryland Offshore Performance Marine Center applied a stunning paintjob to the 32 Dominator SS and is currently re-powering the boat with new MerCruiser 496 Mag HO engines.

Imhof said his guys spent roughly 500 hours painting the boat, which he said was somewhat extensive for a 32-foot open-bow V-bottom.

“Beyond the graphics, we did a lot of body work and repaired a bunch of stress cracks,” Imhof said. “Greg was very involved in the project. He took our design input and personalized it a little. He liked the lines of the design from the get-go. We really tried to give the boat a longer and sleeker look. I think we accomplished that.”

Imhof said he and the Maryland Offshore crew are going to be doing the Key West Poker Run next month with a couple of customers—Brian Borga, who owns a 43-foot Black Thunder Offshore V-bottom, and Brian Metcalf, who owns a 42-foot MTI cat—so if you’ve been thinking about updating your boat, feel free to bend his ear if you see him there. You can also give him a call at the shop anytime. He is one of the most easy-going and sincere people I know in the industry—and obviously his company’s work speaks for itself.