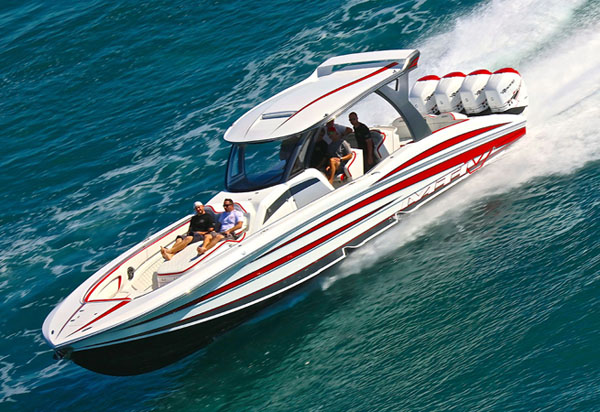 For someone who lives in Kansas and boats most often at his home on Missouri’s Lake of the Ozarks, late February doesn’t sound like a great time of year to take delivery of a boat you purchased on your hometown lake. But for Ray Medlock, the timing of his purchase of a new MTI-V 42 luxury performance center console from Wake Effects in Osage Beach, Mo., couldn’t have come at a better time.

How so? Medlock, a lifelong freshwater lake boater whose primary experience with performance boating was through friends, took the maiden voyage in his beautiful red, gray and white 42-footer powered by quad Mercury Racing Verado 400R in the Florida Keys a few days after the Miami International Boat Show ended as part of the MTI Owners Fun Run from Miami to Marathon.

The experience, according to Medlock, was beyond anything he could imagine. He said his first saltwater boating experience, which happened to take place in one of the coolest places to boat in saltwater, was the “perfect trip.”

“I had no idea I was jumping on a plane to meet some of the best people I’ve ever encountered when I left for the MTI Owners Fun Run,” said Medlock, CEO of Source Inc., a wireless integration company in Shawnee, Kan. “I met so many great people and saw so many cool boats. I can’t say enough good things about how the Wake Effects team treated me. Rusty Rahm and the rest of the guys went out of their way to make sure I was comfortable with the boat in the open water. It was an eye-opening experience for someone who has only boated on lakes. I couldn’t have done it without the Wake Effects team and everyone at MTI. From (MTI owner) Randy Scism, his brother-in-law Greg (McCauley) and (MTI sales manager) Tim Gallagher, the group at MTI was super helpful.” 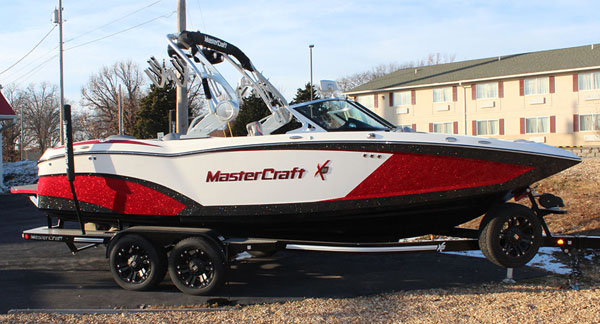 Medlock decided he had to have the MTI-V 42 to match the new MasterCraft Boats X23 model he purchased from Wake Effects in Osage Beach, Mo. Photo courtesy Wake Effects

Medlock, who has owned bass boats, cruisers, wakeboard boats, PWC and more, took a few buddies with him for the fun run. He and his friends—one owns a Cigarette and another owns a Formula—were blown away by the boat’s performance.

“The boat is amazing—whether you’re in calm water or rough water, it is incredibly stable and comfortable,” he said. “During our trip we had about six people in it every time out and there was room for plenty more, and everyone would still be comfortable. The engines are real responsive. We got it up above 75 mph many times throughout the run. The funny thing was we’d be cruising around 60 or 70 mph having a great time and all of a sudden a cat blasts by going at least 100 mph. That was something I’ll never forget.”

Medlock said he enjoyed seeing the variety of MTI-V 42s on the run and getting to be up close and personal with some of the company’s most exotic catamarans and their owners. He also was impressed with the Faro Blanco Resort and Yacht Club and the Florida Keys, especially Key West. (The group did a lunch run to Key West on Saturday.) He enjoyed the trip so much he’s renting a house in Marathon for the next three weeks to take his wife, Laura, and their three kids for two weeks of spring breaks. The final week he’s planning a work retreat for his executive team and top sales people. Of course the boat will be the focal point most of the time.

Sounds like a great trip, huh? But wait, that’s not even the best part of the story—the MTI was an impulse purchase.

“I think Ray only came in to buy a wakeboard that day,” Rahm said with a laugh. “A wakeboard, not a wakeboard boat—he already had one he purchased from Wake Effects before. And he ended up leaving with a new MasterCraft X23 and an MTI.” 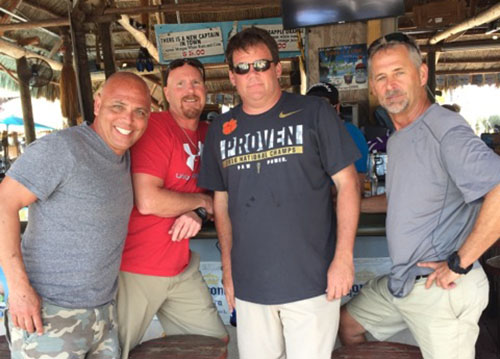 Medlock and his friends enjoyed everything about the MTI Owners Fun Run. Photo courtesy Wake Effects

True story. Medlock started looking at all of the new technology offered on the 23-foot MasterCraft wakesurfing boat and was in awe. He wanted it to replace his 2009 MasterCraft. Blake Kelly, sales manager at Wake Effects, said he also showed Medlock the “matching” 42-foot MTI as he’s sold a few complementary wakeboard boats to performance boaters so why not see if it would work the other way around. It did. Medlock saw the boat as a replacement for his “entertainment” boat, a Regal Boats 3860 cruiser that he still owns.

“The first time Laura stepped in the MTI she thought it was a pretty boat,” Medlock said. “She was all in because she was impressed with how much room there was to entertain family and friends. Our family is going to enjoy it.”