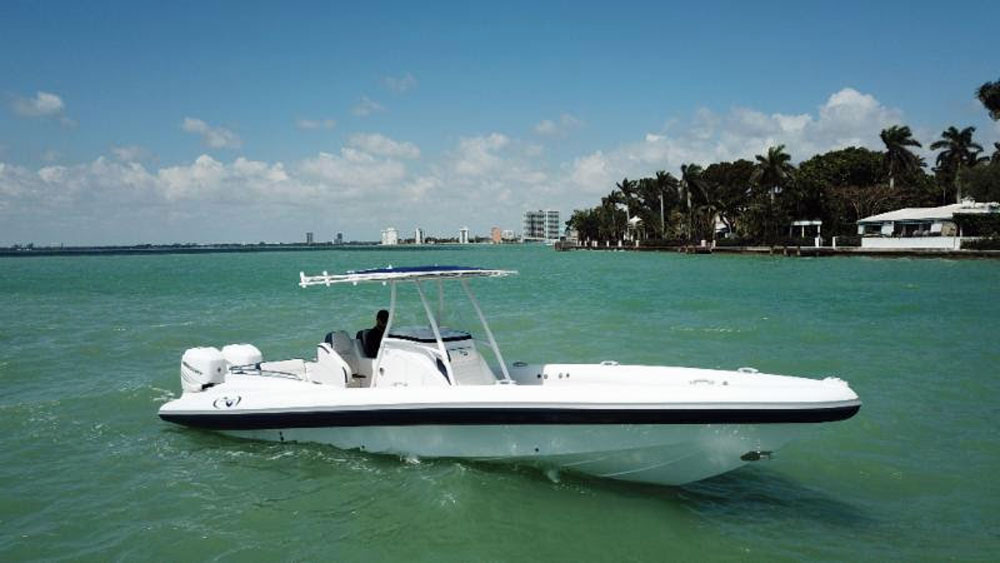 Call him John, Johnny or simply “J.T.”—by any name, John Tomlinson of TNT Custom Marine in Miami is arguably the most talented throttlemen in offshore racing history and one of the most knowledgeable setup guys in the high-performance powerboat world. Kind and soft-spoken, Tomlinson, who founded TNT Custom Marine with partner Mike Thomas in 1984, has a work ethic and resume that just won’t quit.

From his multiple offshore racing world championships—most recently with the Performance Boat Center team—to his courageous Lake of the Ozarks Shootout performances during the years, Tomlinson has become legendary in the high-performance powerboating community. He’s forgotten more about setting up and driving go-fast boats from the likes of Skater and MTI than most people will ever know.

And yet he’s never owned a model from either of those two venerable catamaran builders.

But Tomlinson has owned several Airship RIBs such as the new 33-footer powered by twin Mercury Marine Verado 300 outboard engines. His company currently lists them at $199,000. And while he currently doesn’t have one tied up at the dock in front of his home, he likely will again as the rigid inflatable boats—essentially fiberglass running surfaces fitted with forgiving inflatable hull sides/collars—appeal to him on many levels, not the least of which is price.

“For one thing, I like the way they look—they’re great-looking boats,” Tomlinson said. “And they’re fast. The Airship 335 we have on sale will run 71 or 72 mph. They’re small enough to be fast with just about anything. They’ll run 50 to 55 mph with a pair of 150-hp outboards or in the high-70s, in calm water of course, with a pair of (Mercury Racing) Verado 400Rs.

“The one we’re selling now has the new, integrated outboard bracket glassed into the hull,” he continued. “It has a lot of nice features like SeaDek flooring, full canvas, great seating and a nice T-top. It’s just a very cool boat. It’s not an ‘industrial-looking’ RIB.”

According to Steven Fernandez of TNT Marine Sales, the company has sold approximately 20 Airship RIBs since it took on the line about four years ago. Neither Fernandez nor Tomlinson expect RIBs to attract veteran performance-boat owners in the same way center consoles have, but they do see them as an exceptionally versatile second-boat/runabout options at relatively affordable prices.

“We’ll sell a few a year,” said Tomlinson. “It’s kind of a unique market—it’s not for everyone. But I think they’re cool, and they’re built really nice. They’re great day boats. Kids love to sit on the tubes and they’re great for running out the Keys and beaching.

“Everyone we’ve ever sold one to loves it,” he added. “And I think every Airship RIB we’ve sold has never been resold. The original owners still have them. That’s saying something.”