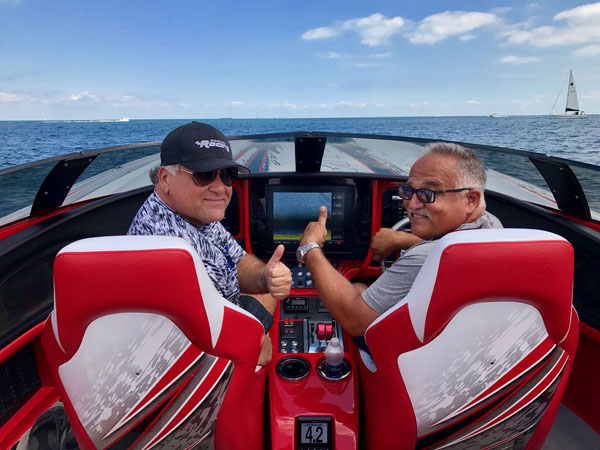 Mark DiMichele (right) ran his new Mystic Powerboats C4400 with former owner Ron Szolack to get comfortable with the boat.

Before he bought a 2017 Mystic Powerboats C4400 catamaran from well-known go-fast boating community member Ron Szolack about a month ago, Mark DiMichele was a devout V-bottom man. The Canton, Mich., contractor who does most of his boating on nearby Lake St. Clair, started out with a 27-foot Donzi sportboat and followed it up with three more Donzi V-bottoms—a 33-footer and two 38-footers—before stepping up to an Outerlimits SV 40 powered by twin Mercury Racing 700 SCi engines a few years ago.

DiMichele and his wife, Joanie, loved their burgundy-hued, open-cockpit 40-footer—they ran it in the Boyne Thunder Poker Run and several other events this summer—but were ready for a change. “It was a great boat,” he said. “And a really beautiful boat.”

That change came in the form of the Mystic C4400 cat with Mercury Racing 1100 engines owned by Szolack, who took DiMichele’s Outerlimits SV 40 on trade to make the deal happen. Suddenly, DiMichele found himself in possession of his first catamaran, and one capable of running close to 160 mph.

“Ronnie got it up to 158 mph with different props,” said DiMichele, who ran the cat with Szolack a couple of times before taking delivery of it. “The fastest I’ve run it was 147 mph with Tres Martin when I took the Performance Boat School driving course from him.” 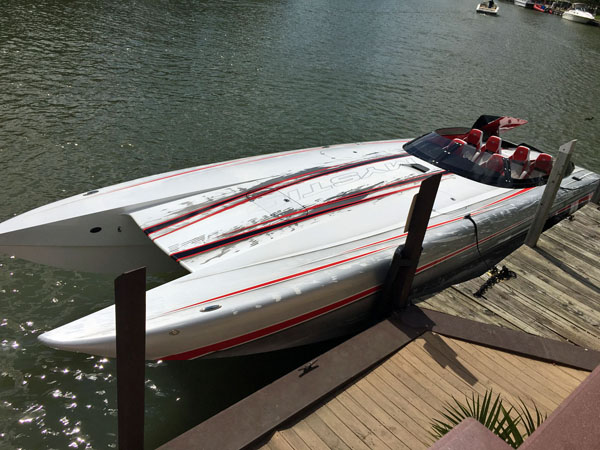 While the 44-footer is—as noted above—DiMichele’s first cat, his most recent experience with Martin’s school actually was his second time taking the course. In 2013, he want through the Martin-led program in his 38-foot Donzi. This time around, DiMichele said he found the on-water portion of the course particularly useful.

“I learned a lot about trimming and turning techniques,” he said. “A lot of it, I suppose, you could learn by trial and error, but it sure is a lot easier when you have someone who knows what he’s doing showing you how to do it.”

DiMichele estimated that he has logged 12 to 14 hours behind the wheel of his Mystic C4400 in addition to the time he spent taking the course. And he’s never been happier with a boat, although he’s likely done with “major events” this season.

“I’ll never buy another V-bottom again,” he continued. “This boat is so much smoother and more stable at speed. I don’t know if all cats are like that, but this one is.”