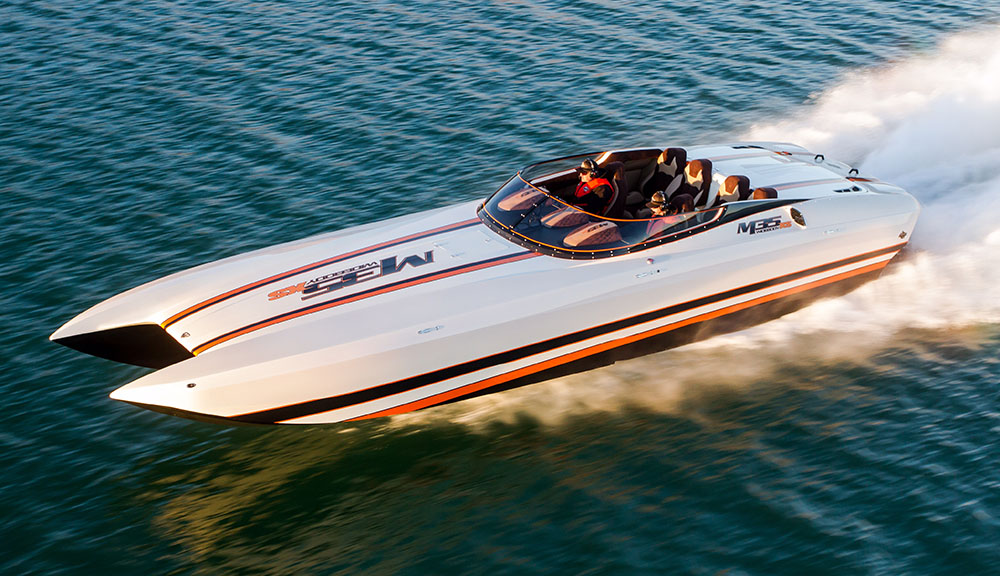 When Brad Macaulay saw his new DCB Performance Boats M35 Widebody XS model for the first time in Lake Havasu City, Ariz., earlier this week, the Canadian performance boater was blown away. Macaulay, who owned a striking all-blue DCB M31 Widebody with twin Mercury Racing 1100 engines, was involved with selecting the rendering, color scheme and other options. Other than that, he managed to keep his distance and received only little snippets from Paul Miller, DCB’s general manager, all the while anticipating what was to come.

That day arrived on Monday and Macaulay and DCB’s Tony Chiaramonte have been playing around on Lake Havasu for the last few days. (DCB also delivered a new M31 to its local dealer, Horizon Motorsports, and tested its Mercury Verado 400R-powered M29 with the boat’s new owner, Atlanta’s John O’Neill.) 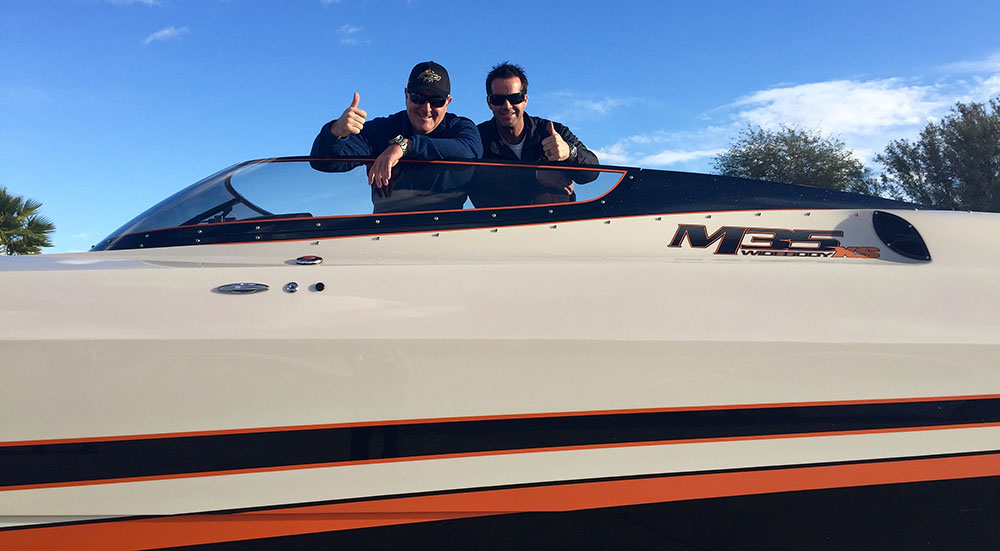 “I don’t know if the word is ‘smoother,’ but the boat definitely feels more in contact with the water,” said Macaulay when asked to compare the new M35, which is powered by twin Mercury 1350 engines and M8 drives, to the M31 DCB took in and sold on trade. “I put the larger fuel tanks in the boat—an extra 20 gallons on each side—because I live on a pretty big lake in Canada and want to have a little more range. With a full tank of fuel, we got it up 166 mph and it felt rock-solid.” 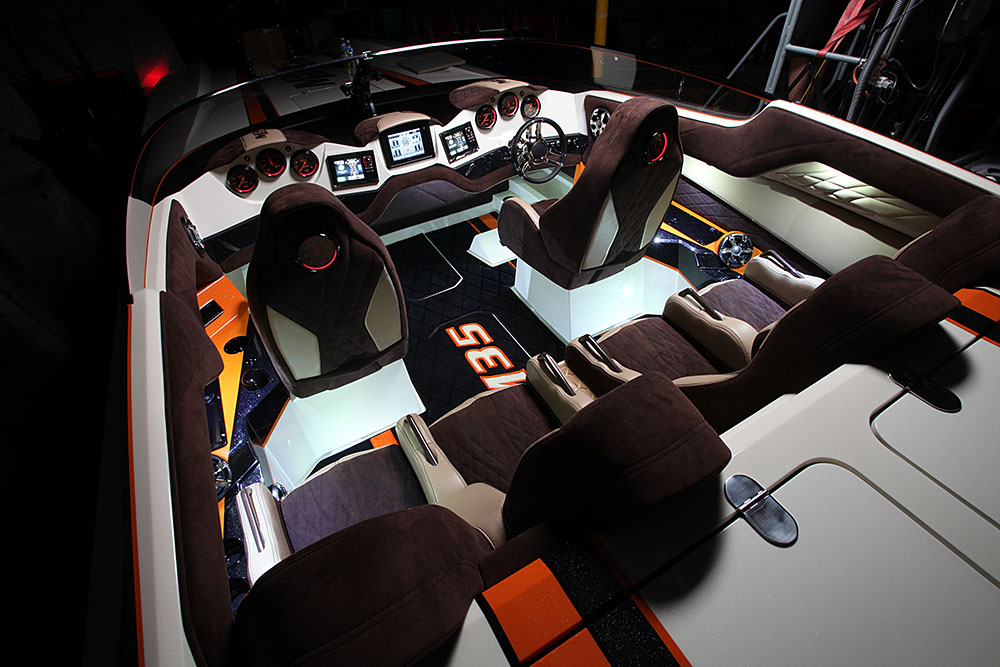 Between the upholstery, the carpet, the lighting and the electronics, the 35-footer’s cockpit is a work of art. (Photo courtesy DCB.)

Macaulay, who lives in Kelowna, British Columbia, admitted he drew inspiration for his new 35-footer from the Koenigsegg One:1 megacar, as well as from some of the diamond white paint jobs on cars nowadays.

“I saw the Koenigsegg online and started elaborating from there—and DCB nailed it,” added Macaulay, who said the XS stands for “extra special” or “extra sexy” depending on who you ask. “The pearl in the gelcoat of this boat is stupid bright and we found a nice two-tone chocolate interior to go with it. Of course Carlos [Lafarga, DCB’s interior expert] did an amazing job. The boat has a lot of automotive influence that’s for sure.”

Macaulay also was very complimentary when it came to the rigging throughout the catamaran, which is DCB’s first M35 with the solid (non-see-through) engine hatches—a nice touch since the orange stripes on the deck carry across to the engine hatches and down the transom.

“Since this was my second DCB, I really wanted to make this one special and the crew at DCB gave me everything I asked for and more,” said Macaulay, pointing to the engine hatches and the orange and white LED lights throughout the engine compartment and cockpit. “Between Deron, Greg, Paul, Carlos and everyone else at the shop, I’m at a loss for words. The boat is just incredibly beautiful and refined.” 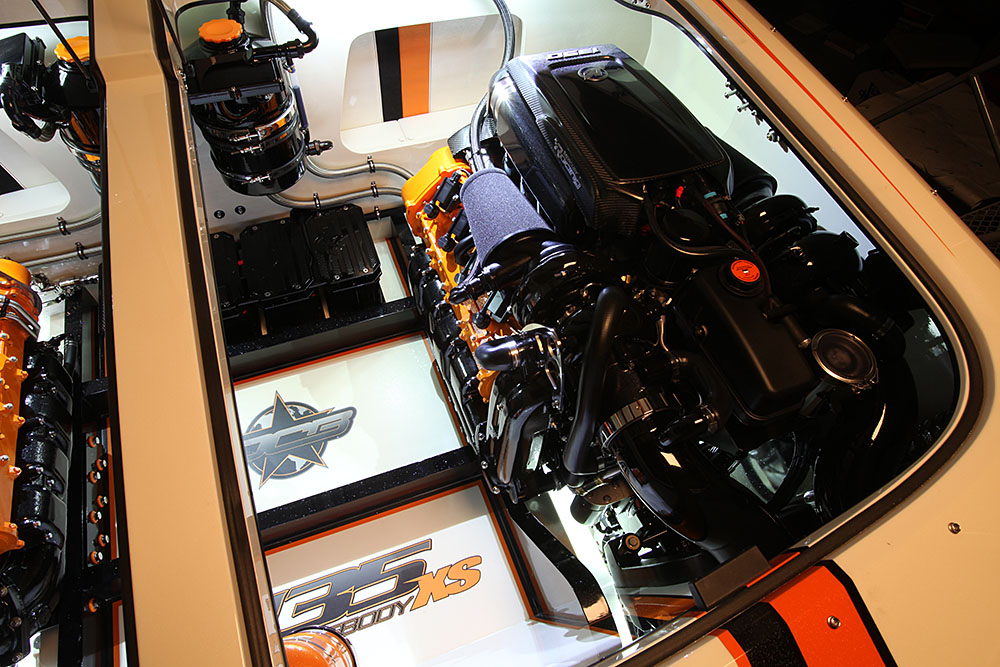 The team at DCB did an incredible job rigging the Mercury Racing 1350 engines. (Photo courtesy DCB.)

According to Macaulay, the M35 Widebody XS will remain in Lake Havasu City until DCB hauls it to Scottsdale, Ariz., in January for the Barrett Jackson Collector Car Auction. He plans to keep it in Lake Havasu until the Desert Storm Poker Run in April. After that he will take it home to Canada’s Shuswap Lake.

“We may have gotten a little carried away with the new creature comforts, but why else would you own a DCB if you’re not willing to take it to the next level?” Macaulay asked.