You are at:Home»Industry»Inside the Industry: Call It A Comeback 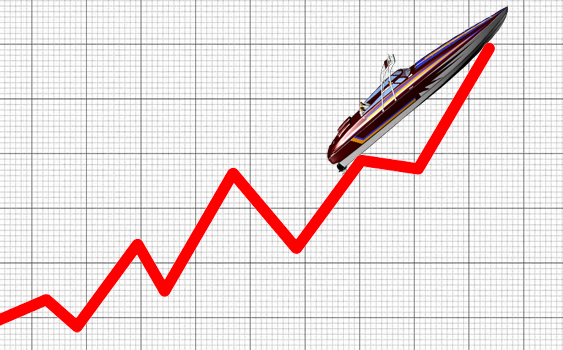 After ten years in the high-performance powerboat sales and service  business with 1,100 boats sold since we started, I can say with absolute certainty that the past four-and-a-half years have been our most challenging. You probably could have guessed that. But here’s something I’ll bet you wouldn’t have guessed.

For overall boat sales, 2011 was the best year we’ve had since I started this company. What’s more, our 2012 boat sales are on pace to eclipse our 2011 boat sales.

For sure, those sales break down a whole lot differently than they did five years ago. Back then, we were selling new and used boats in relatively equal numbers. Today, for every ten boats we sell nine are used, or pre-owned if you prefer a fancier term, and one is new.

And guess what? That’s not a bad thing, even for boat builders.

Here’s why: the differential between new- and used-boat prices is shrinking, because the field inventory of clean, late-model used boats is thinning—and thinning fast.

There was a time when, thanks to the economic horror show that began several years ago, there were plenty of really clean, low-hour used boats that were selling at fractions of the prices of their new-model counterparts. What you could get for your money on the used-boat side was so sensational that, quite honestly, it didn’t make a lot of sense to buy something new.

But as I said, that’s changing. We always are on the lookout for clean, late-model used boats to buy, and they’re getting a lot harder to find. And for that reason, their prices are rising to the point where in the not-too-distant future it won’t be such a “no-brainer” to buy used. What’s more, most manufacturers have not been producing a whole lot of new models in the past four or five years, so there’s no longer a bunch of late-model “new” stuff sitting around.

In short, I believe that the market is on its way to finding a balance between new and used boats. That’s great for us, because we sell both but, again, it’s also great for the boat builders.

Our industry has gotten smaller. A lot of industries have gotten smaller. That’s hardly a news flash. But despite that there are fewer go-fast builders and dealers out there today, we’ve continued to add services to attract customers and, quite honestly, gain market share. We’ve expanded our service center and storage facilities. We’ve improved our full-service consignment business. We’ve added transportation and concierge services. We’ve even gone in the restoration business. Yes, as I said, we sold more boats in 2011 than we had in any other year and 2012 is looking even stronger, but we haven’t sat back and relaxed.

Pier 57 is a “glass half-full” company. We see opportunities out there and we are cautiously optimistic about the high-performance marine industry and the economy in general. But we also believe that if you’re not moving forward, you’re moving backward. So we’ll keep pushing ahead. That’s what we do.