You are at:Home»Industry»Rumblings From Black Thunder

The excitement and enthusiasm is quite evident, there’s no doubt about it.

I remember it clearly while sitting at the open house luncheon hosted at The Boardwalk at Waves and Wheels during the late-August Lake of the Ozarks Shootout in Missouri alongside father-and-son Don and Bob Jenkins, the founding family behind Black Thunder Offshore. 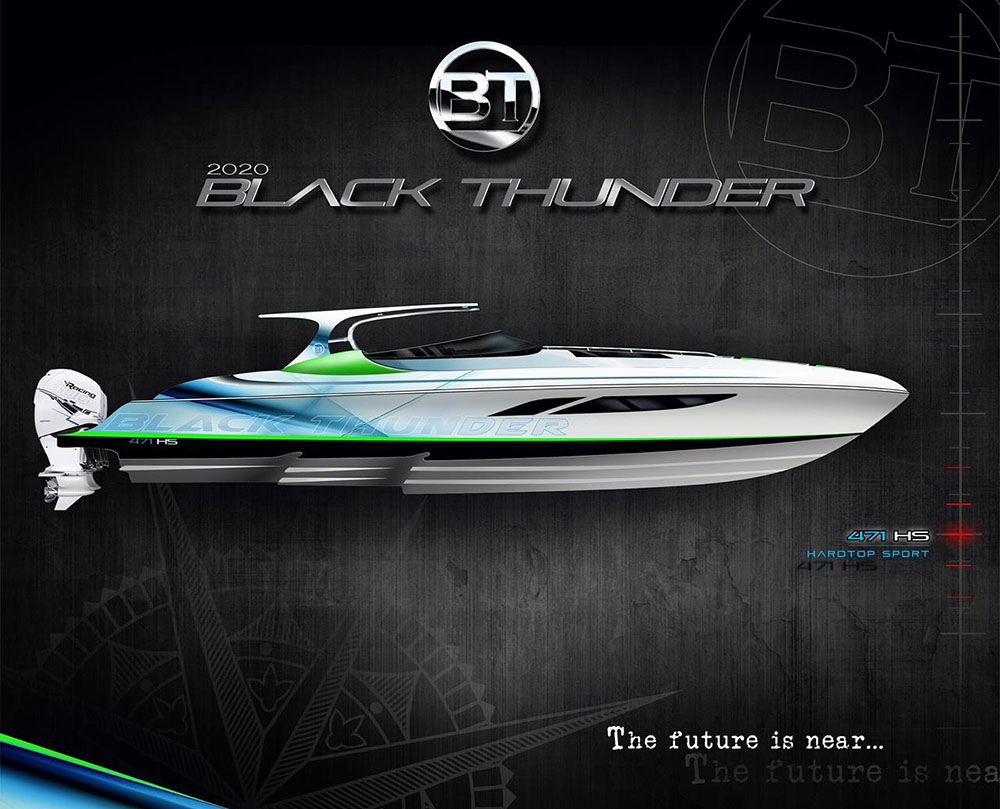 I also recall it while talking to John York—Black Thunder’s director of marketing—in the cabin of Kurt Truettner’s triple-engine 46-foot Black Thunder tied up to the docks during the mid-September Lake Powell Challenge in Arizona.

And it was quite clear the last couple of times I’ve caught up with Justin Wagner, owner of Waves and Wheels and Bluave Marine Audio, as he’s prepping interior designs for the new-and-improved 46-foot raised-deck V-bottom coming soon from the Hannibal, Mo.-based boat builder.

Every one of them, and hundreds of others who are part of the Black Thunder faithful, are genuinely excited about what’s to come for the longstanding offshore V-bottom builder. They’re all expecting 2019 to be a big year for the brand.

“Everyone at Black Thunder is excited about what’s ahead,” York said in an interview last week. “We’re getting close to sending our 2019 46-foot raised-deck model to Waves and Wheels and can’t wait to show it off early in the year. Our second and third hulls currently in production featuring our new resin-infused, vacuum-bagged lamination process are 43-footers, both of which are going to be powered by outboard engines. One is going to have the raised deck with Black Thunder’s typical 6 foot 10 inches of cabin headroom and the other is going to have a flat deck and will be our ‘poker run special.’

“Hulls four and five on the schedule are both 46s,” he continued. “One is a raised deck with twin Mercury Racing 1350 engines and M8 drives. The other is a flat-deck poker run edition with a still-respectable 5 foot 8 inches of cabin headroom. From there we plan on producing a completely new model for 2020—a 47-foot center console, one with outboards and another with inboards, most likely Mercury 1350s.”

York, who is a proud Black Thunder owner and has been a friend of the Jenkins family for many years, made sure to give credit where it’s due, starting at the top with Don Jenkins, who is chairman of the Board of Directors. His son, Bob, is director of production operations and fellow board members William and Kristine Goehl are product development advisors. Also handling product development is York’s son, J.J., and Kurt Truettner. Sharo Maddox manages the Owners Club as well as any event planning coordination. 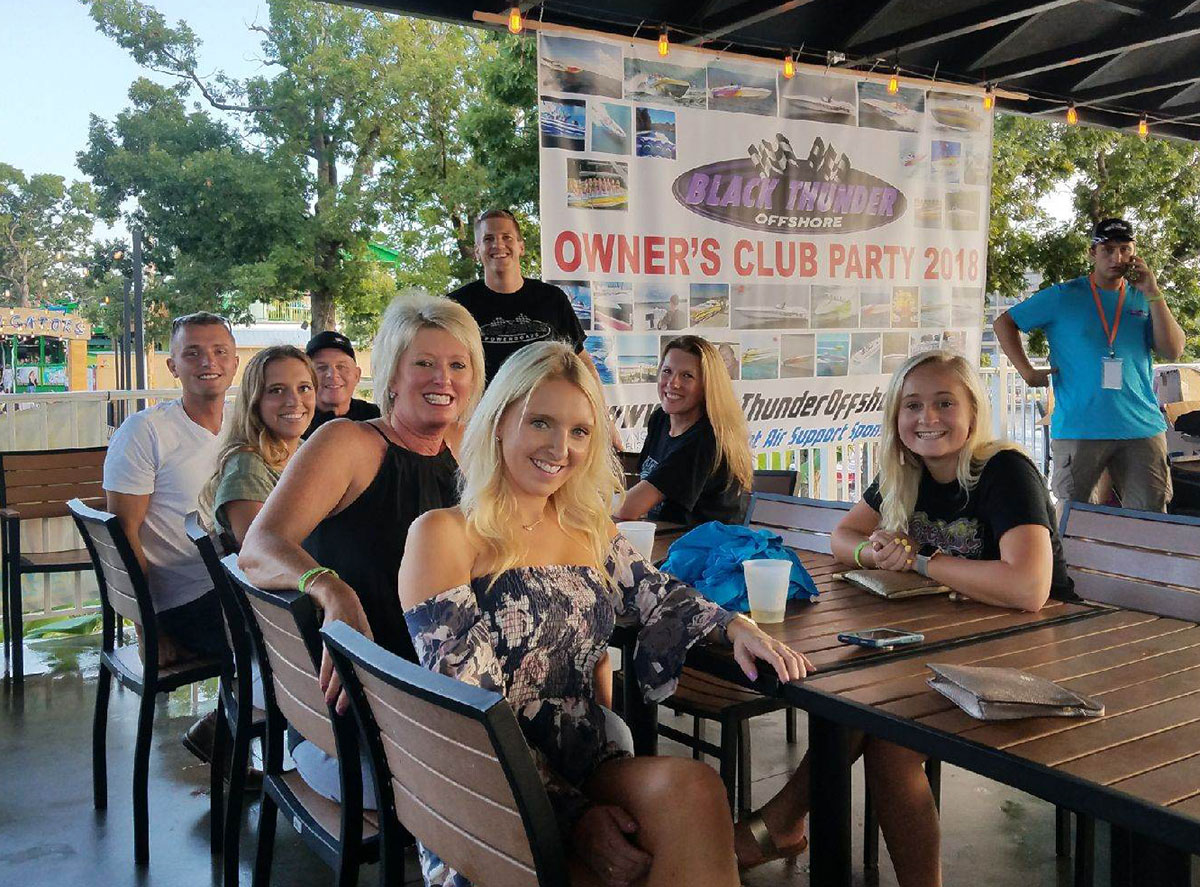 “Between the Owners Club event we hosted during the 2018 Lake of Ozarks Shootout and all of the Black Thunder owners I’ve talked to since then, it’s clear there is a supportive group of past and current customers out there,” York said, adding that the company took three orders during the Shootout week and have a half-dozen more orders that are being finalized.

Besides the first 46, which is going to be white with minimal graphics and used as a demo model, York expects the 2019 production schedule to fill up with pre-order boats exclusively in the near future. 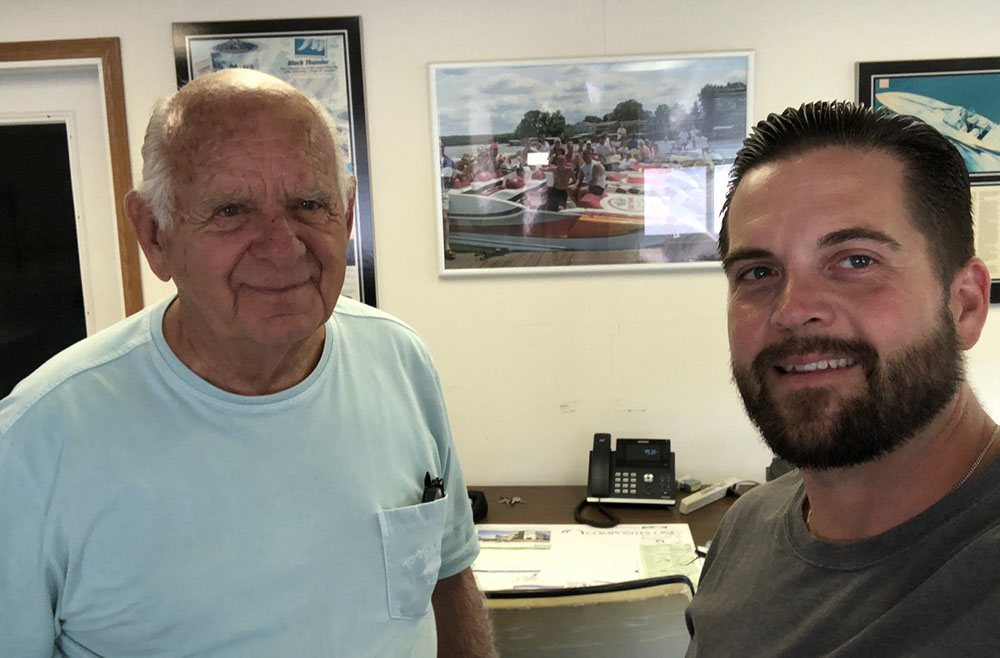 During a recent visit to the Black Thunder factory in Hannibal, Mo., Don Jenkins posed for a selfie with Justin Wagner of Waves and Wheels. Photo by Justin Wagner

“This 46 we’re working on should be awesome—it’s going to be the best-looking, most modern Black Thunder out there,” Wagner said. “We’re excited to be working with the team at Black Thunder. Don is such a cool guy, and he’s so smart. I enjoy spending time with him and I’m grateful that he is counting on us to modernize the boat and get it up to speed with styling, looks and function. For me, I try to be a sponge when I’m around people like Don who have so much experience in this industry.

“I know from my customers and social media followers that there are a lot of Black Thunder fans that are going to be excited to see something new,” he added. “I hope we can meet their expectations.”