Truth be told, I wasn’t sure what the team at Race World Offshore had in mind when it put out the call for the inaugural RWO Key West Boat Building Contest and Race taking place on Saturday in the heart of Truman Waterfront Park. Along with not understanding what all it entailed, I wondered how well it would be received the morning after the Friday night street party stretching along 10 blocks of Duval Street. 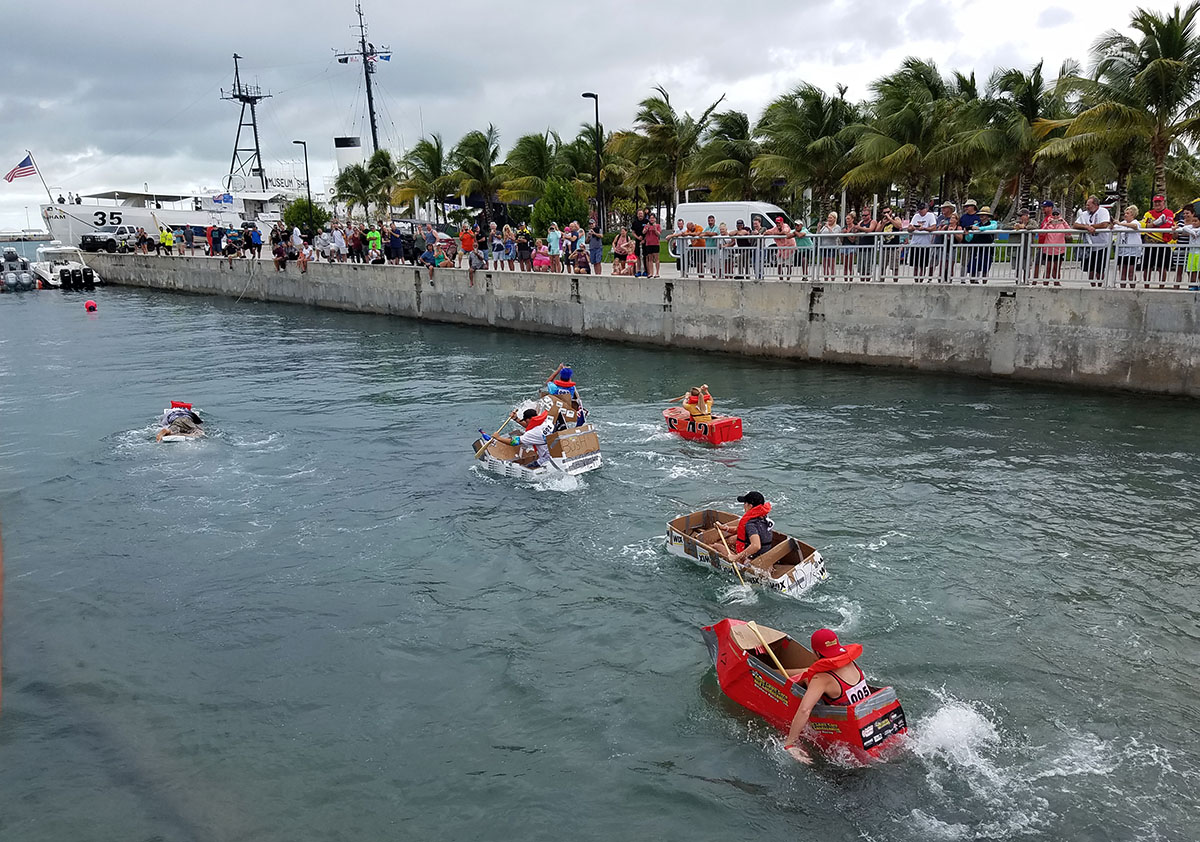 When all was said and done, the good-natured boat-building event that was accompanied by RWO’s Vendor Village, which was open all day and included driver meet and greets, live music, a full bar, food and shopping, appeared to be a monumental success. In fact, organizers and participants alike expect next year’s contest to be much larger.

According to Lee Stanford, RWO’s director of business development, the bid to obtain the five-year contract with the City of Key West presented by RWO included the boat-building contest and vendor village, both of which were new “events within the event” designed to be interactive with the Key West community. The vendor village, which Stanford said provided a great opportunity for local nonprofit organizations and businesses to display their wares, was well received, and the race got excellent engagement for the first year, despite an early morning drizzle.

Following a “drivers’ meeting,” each team was provided three large sheets of cardboard, a box cutter, a roll and a half of duct tape and exactly one hour to come up with a boat that that could take a team member down the course and back with the provided wooden paddle and a life jacket. 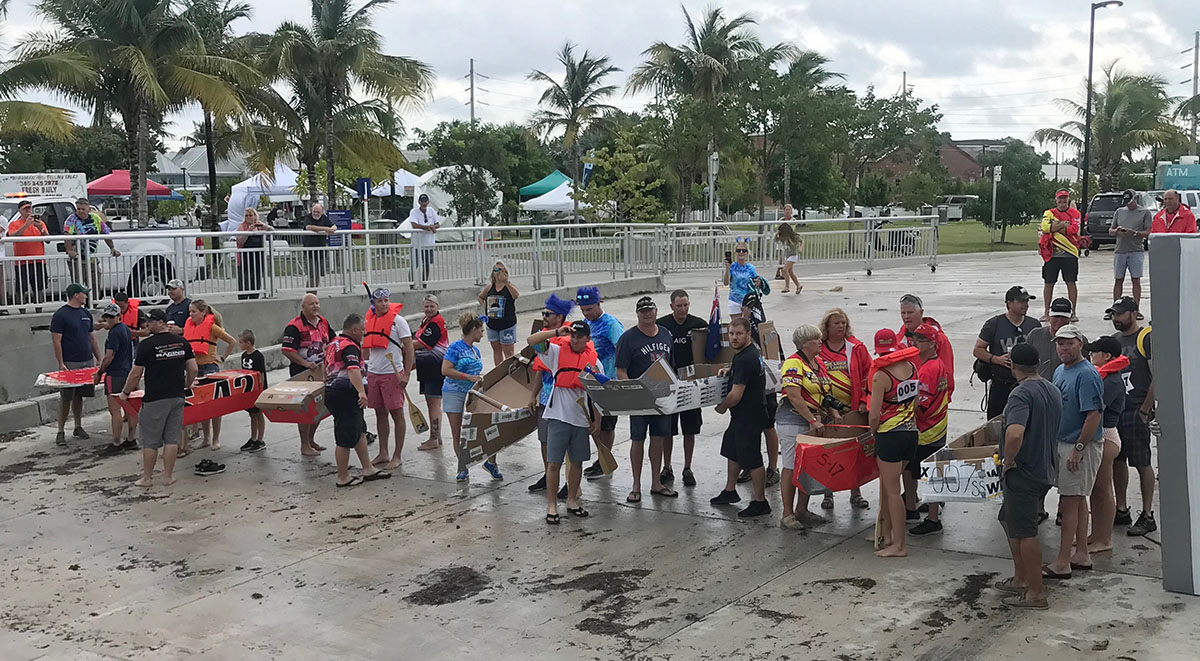 Participants line up for the start of the race at the boat ramp in Key West’s Truman Waterfront Park.

As the 60-minute mark approached, the judges gathered the entire group of teams, their boats and their support staff to form a parade line and walk through the vendor village on the way to the boat ramp starting line. Village visitors were treated to an excited group of participants, colorful uniforms and interesting boat designs—a lot of which was documented on social media channels since promoting the event was one part of the “official” judging criteria along with creative use of provided materials, seaworthiness, team uniforms, boat bling, pre-race media posts, loudest group and, last but not least, finishing first, second or third in the race.

Stanford said a safety unit from the USCG was standing by ready for anyone who might have veered into the harbor and the RWO Course Marshall set the course for a single lap 75 feet down the straight boat ramp waterway, around the orange marker and back to dry land.

Once at the ramp, RWO director Rodrick Cox got the group lined up, fired the horn and they were off. Some paddled, some swam and a couple sank fairly quickly in Stanford called a fair start. As the boats approached turn 1 it was clear to Stanford that Shadow Pirate team member Scott Porta was well on his way to taking the checkered flag. But there was a problem—he ditched his required wooden paddle in favor of a surfer-style paddle technique. Onlookers knew he would need the paddle to be in contention and there were efforts to throw a paddle to him in the home stretch, but to no avail, as he swam it home.

Fortunately Stanford and company anticipated that some teams would end up swimming, so they had a Best Swimmer trophy that was presented to Porta and Shadow Pirate rather than disqualifying them. 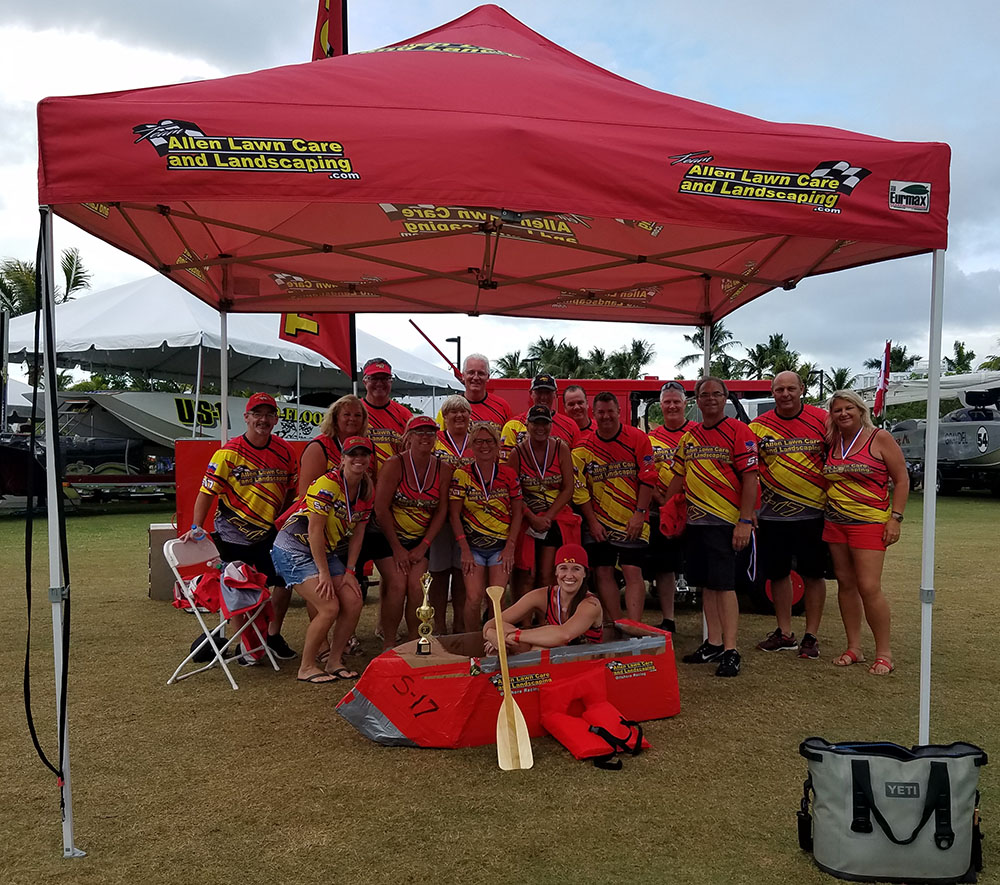 In the end, Team Wake Effects—racing in support of Wake Effects team owner Rusty Rahm, who has been unable to race this season while recovering from an injury—took home the first-place trophy with Team Wix in second and Team Allen Lawn Care and Landscaping in third.

Afterward Stanford explained to the crowd that one of the most important aspects of Race World Offshore is sportsmanship and that several teams displayed that by stepping up to help other teams build their boats. In fact, Todd DeFilipps and the Team Wicked Power Boats crew received the Sportsmanship award as their acts of kindness and support helped make the event that much more memorable.

And that’s exactly why next year’s boat-building contest in Key West is likely to be even bigger and better.