In a little more than two months, the six-race 2019 American Power Boat Association Championship Series—the product of a collaboration between the Offshore Powerboat Association and the Powerboat P1 organization—kicks off May 17-19 in Cocoa Beach, Fla. Among the teams gearing up for the season is Miss GEICO, which has ordered new and reportedly ECM-tamperproof Mercury Racing 1100 Comp engines to run in what, for now at least, can be called the series’ 1100 Class. According to Miss GEICO team manager Gary Stray, the Riviera Beach, Fla., outfit will receive its turbocharged 1,100-hp engines in March and install them in their 44-foot Victory Team-built catamaran. 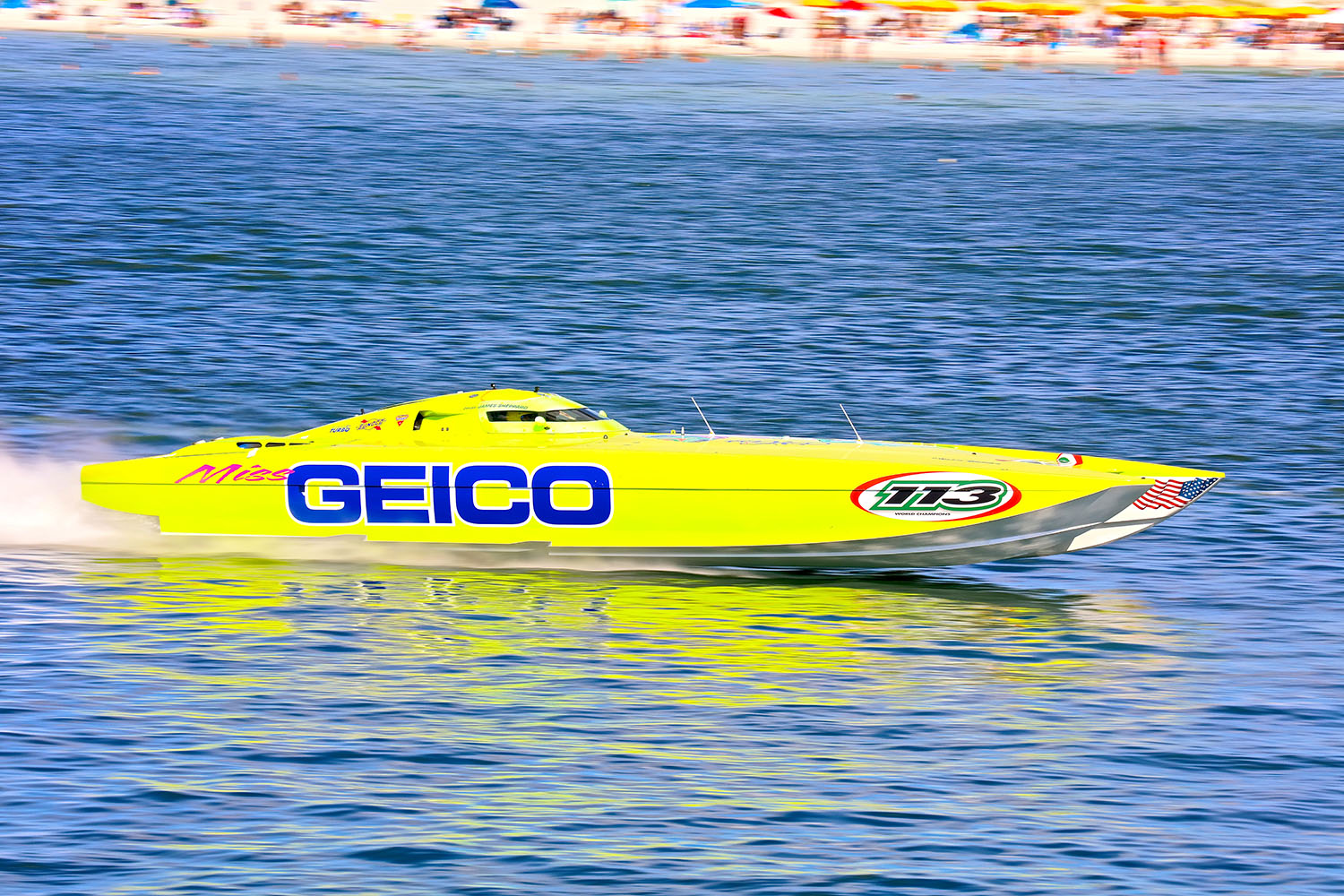 “We will be making a couple of changes for the lower-power engines,” he said. “We are replacing our surface drives—that’s the biggest change people will notice—with a new set and making some hull modifications. The rest probably will not be visible to the untrained eye but one change definitely will be. We are going with a new color scheme on the boat as well this year, still sporting the yellow but it will look a little different.”

Scott Gillman, the chief executive officer of the Victory Team, has confirmed that the Dubai-based offshore racing outfit will field one boat powered by Mercury Racing 1100 Comp engines.  Several other teams from outside the United States—including Australia-based 222 Offshore, Abu Dhabi and Zabo Racing, which originally was based in Norway and competed in the 2018 Super Boat International Offshore World Championships—also reportedly will install Mercury Racing 1100 Comp power. But Miss GEICO is the only U.S. based team that has officially announced a commitment to the new spec engine program.

In an odd twist, that could leave Miss GEICO’s British-born cockpit duo of throttleman Steve Curtis and driver James Sheppard as the sole “defenders of the flag” in the class this year. 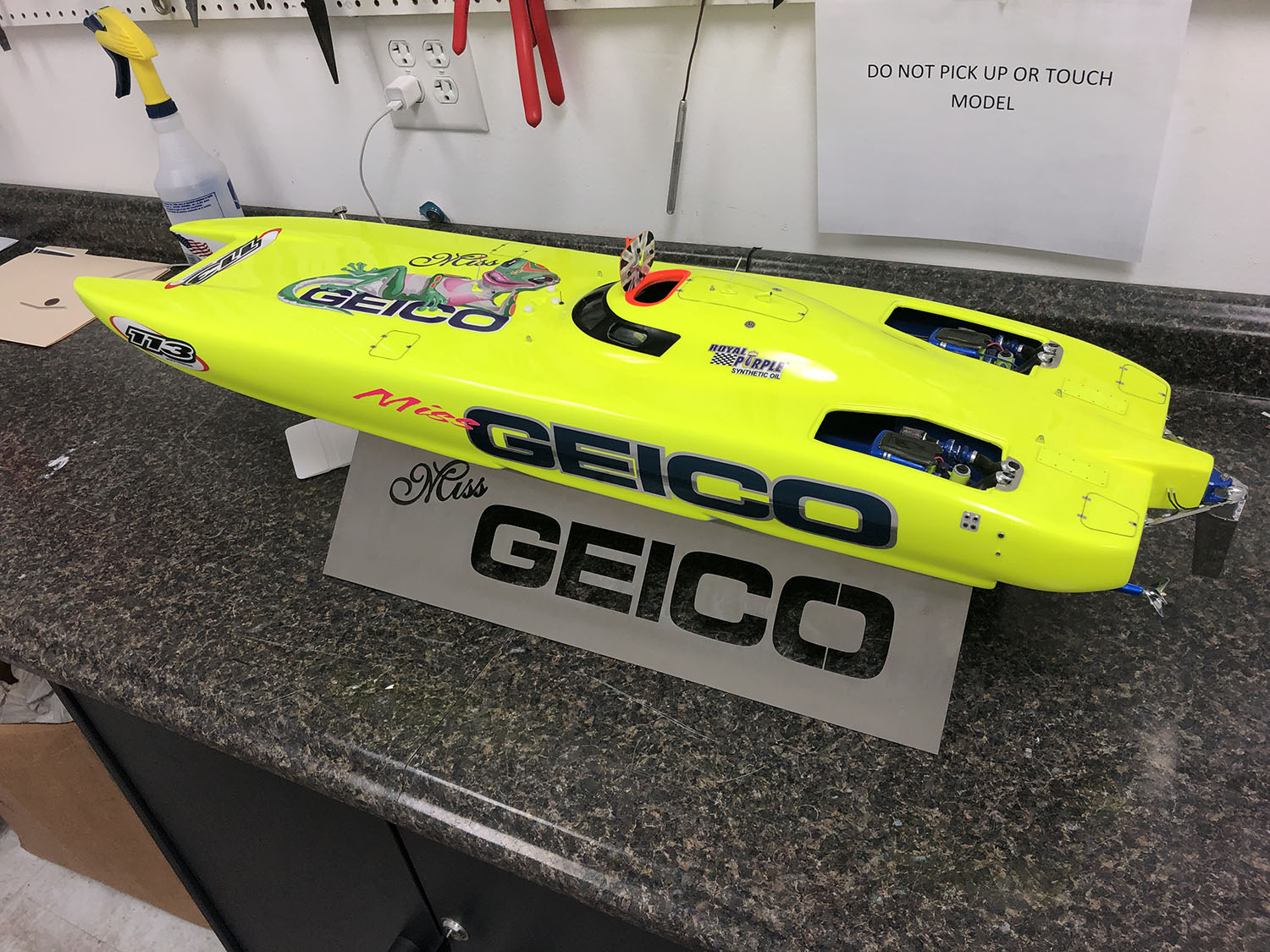 A 1/17-scale model of the Miss GEICO raceboat will find a home in one of the Smithsonian Institution Museums next year.

No matter—Stray and company are pushing forward. The Miss GEICO team will begin what he called “light testing” in April before embarking on a more-extensive program in early May before heading to the APBA season-opener in Cocoa Beach.

“I think it’s going to be very positive for the sport,” said Stray. “And I do hope more American teams embrace the Mercury 1100 program. The sport is here now. For the first time, we can have everyone racing here.”

But those are macro concerns that lie ahead for the team. For the past 13 months, Stray has been working with Miss GEICO crew members Robbie and Ali Uggeri and Ed Demmer at the micro level to create a 1/17-scale-model of the team’s 44-footer for an exhibit—the subject of which is mechanical speed—coming to one of the Smithsonian Institution Museums in 2020. The model will arrive at its Washington, D.C., home next week and be placed in “incubation” for the rest of the year.

“They have to measure everything about it—all the vapors and so on—during the incubation period so that if it goes into a case with something else it doesn’t affect whatever that might be,” said Stray. “I had to list everything we used, from paint to glue, building the model. It’s a very complicated process.

“There are no 1/17 scale models of a 1650 engine, so we had to build them,” he continued, then chuckled. “We even built mini fuel pumps and mini sea strainers. The detail involved was incredible. I could have had an entire raceboat built and rigged in the same amount of time. It was a labor of love.”