Although Kansas performance boater Roger Neighbors was under the weather last week when he got a chance to see his new 39-foot luxury performance center console from Nor-Tech Hi-Performance Boats for the first time at the Overland Park Boat Show in Overland Park, Kan., he was overjoyed with the finished product. 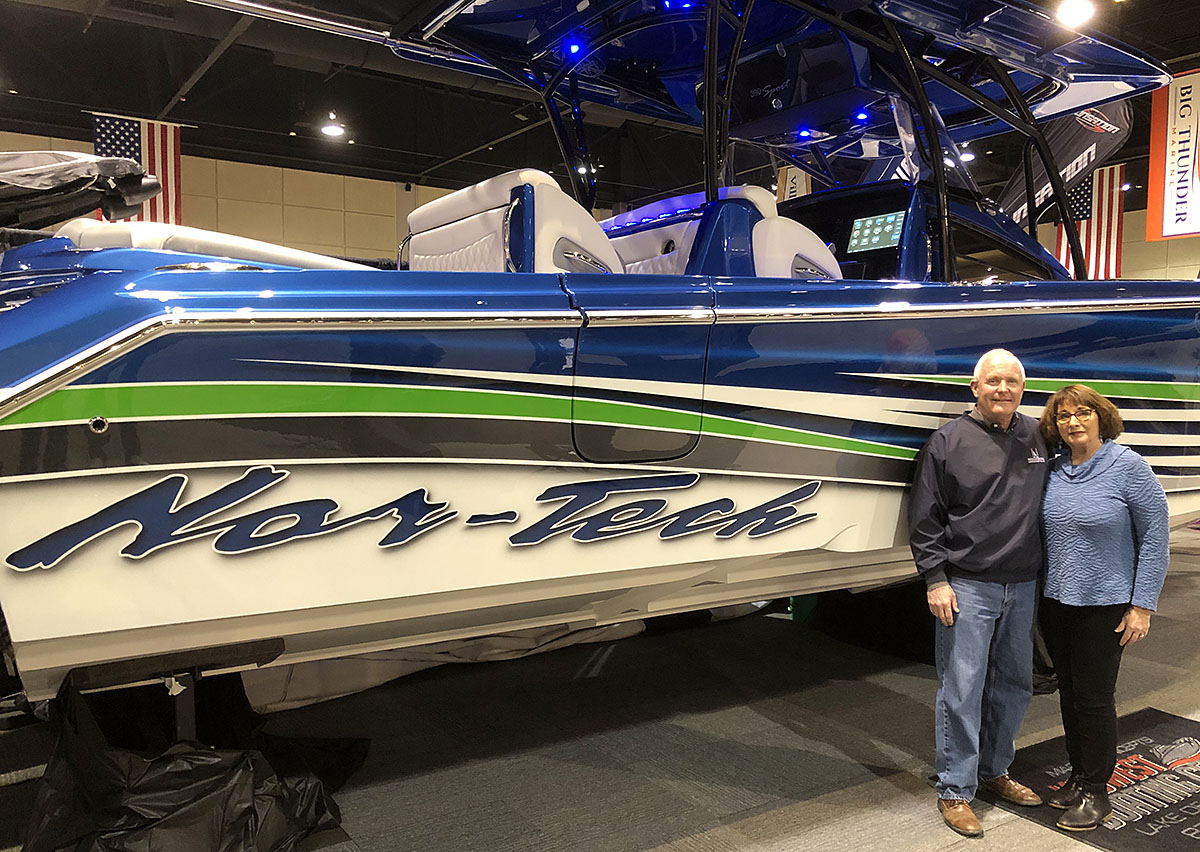 Lake of the Ozarks boaters Roger and Nancy Neighbors were blown away upon seeing their new Nor-Tech on display at the Overland Park Boat Show in Kansas. Photos courtesy Randy Kent

Neighbors and his incredibly supportive wife, Nancy, ordered the 2020 model 390 Sport with triple Mercury Racing 400R engines at the 2019 show organized by the Lake of the Ozarks Marine Dealers Association from Midwest Boating Center’s Randy Kent. And according to Neighbors, the process could not have gone any better.

“The boat turned out great; I think I had a smile on my face the whole time I was at the show on Thursday even though I wasn’t feeling so well,” said Neighbors, who has hosted the Speedonthewater.com team during the annual Lake of the Ozarks Shootout for several years at his beautiful home on the popular Missouri lake, his preferred boating location. “I was so pleased with the whole process. Randy was great to work with and he and the team at Nor-Tech did everything they said they were going to do.

“I was looking at a few different center consoles last year and when I walked over to the Nor-Tech at the show, I knew it was the perfect boat for us,” he continued. “Seeing my boat sitting on the show floor this year was incredible. It just so happened to be Nancy’s birthday on Thursday, too, which made it even better. We are looking forward to running the boat with our kids and grandkids. We’ve never owned a performance boat that we can take the whole family in.”

Neighbors said he can’t wait to start using the 39-foot center console, which doesn’t have a name yet because Nancy, who Roger said really likes the boat, is still working on that. 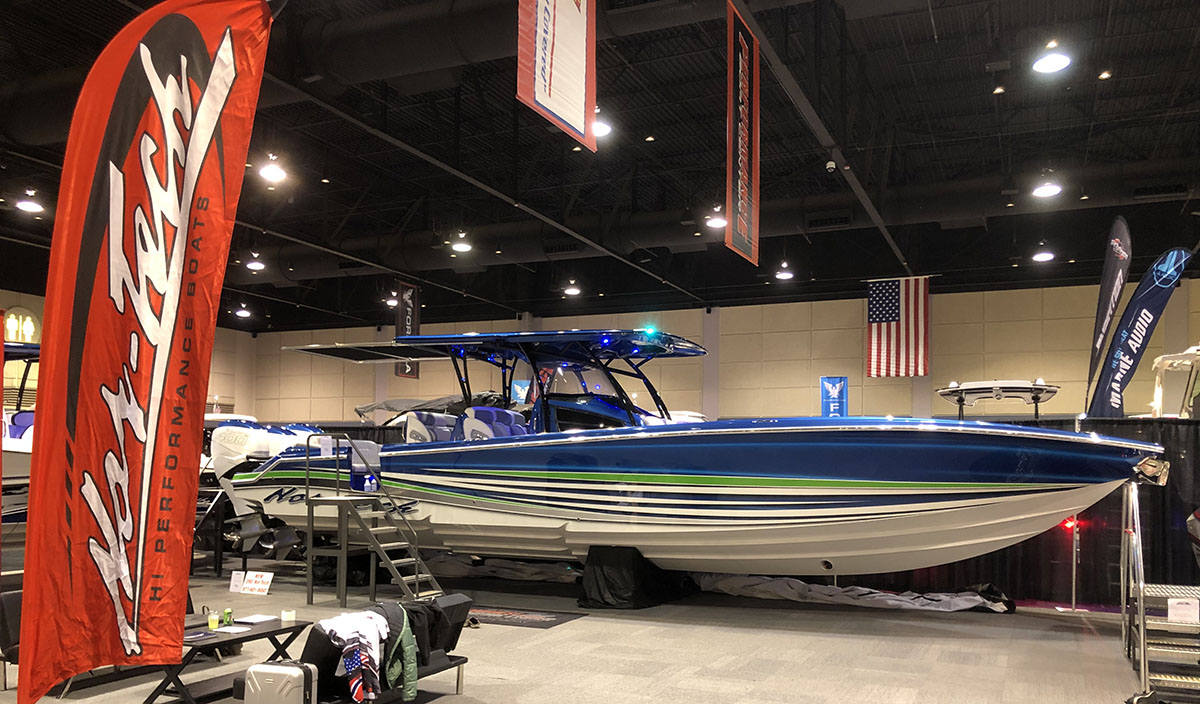 “The boat has everything on it—a bow thruster, stern lights, LED lighting, tons of storage and a bunch of high-end electronics,” said Neighbors, who also owns an impressive Fountain Powerboats 42 Lightning that he’s run in the Shootout and that was completely updated after it partly sank on the lake in September 2018. “It even has a retractable sunscreen, which is the best thing for me since I burn so easily. I mean everything is top-notch. The stitching in the upholstery, the SeaDek on the floor, you name it. There are so many little things about this boat that are spectacular. Nor-Tech even included lines and bumpers, and Randy ordered us a full boat cover from his other business, Marine Concepts.”

The owner of Neighbors Construction in Lenexa, Kan., said the process of building a custom boat like his new 390 was “pretty special.” Although he was the first owner of his 2005 Fountain V-bottom, he bought it from a dealer so he didn’t get to pick everything out. 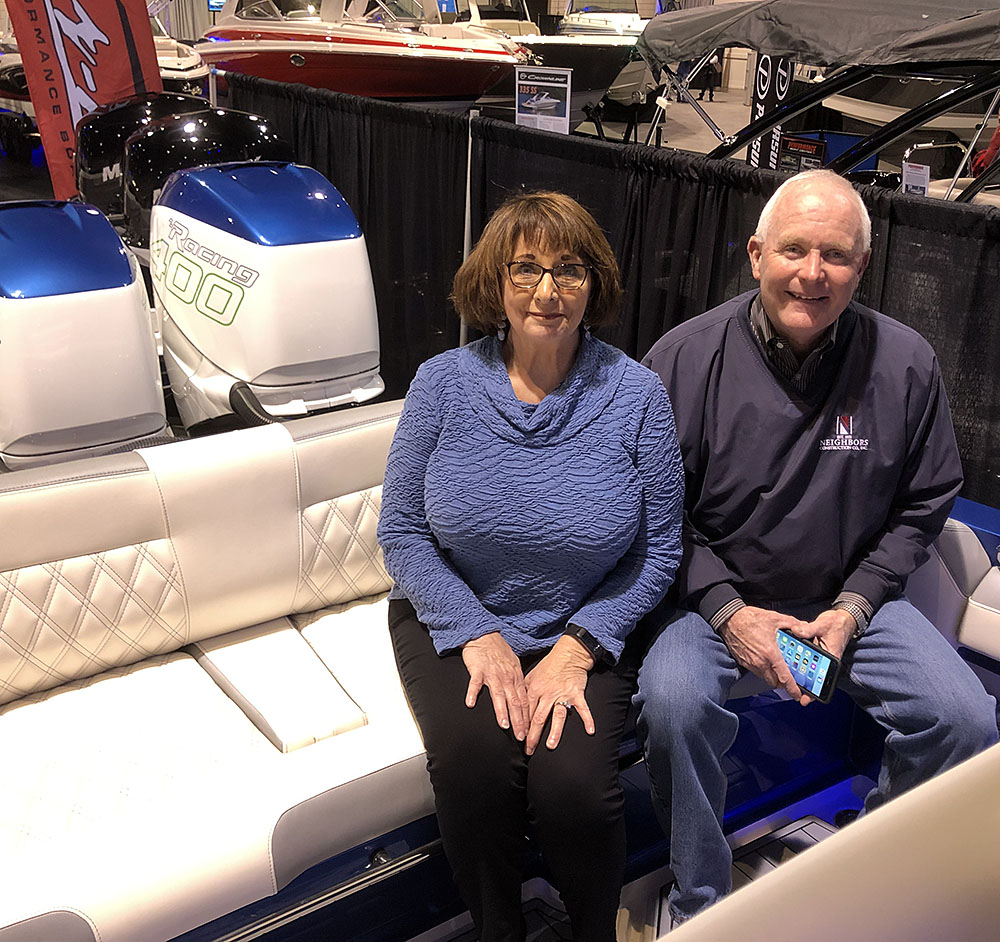 Roger Neighbors said he’s fortunate to have a wife like Nancy by his side.

Neighbors praised painter Mark Morris and the team at Visual Imagination in Peculiar, Mo., for the outstanding graphics on the boat. He said he already had Summerset Boat Lifts install a new lift for the boat on his dock.

“What’s great is Jonathan Gill from Midwest Boating Center brought a Nor-Tech over to my house the day the lift was installed to make sure everything fit like it should,” Neighbors said. “The customer service so far is just excellent. Randy and the Midwest Boating Center team exceeded our expectations. The boat is flawless, it really is. It’s so beautiful I’m almost afraid to take it out.”

Almost is the key word because Neighbors is certainly going to enjoy his boat once the boating season rolls around. Just like I’m going to enjoy my ride in it come late August when I’m in town for the Lake of the Ozarks Shootout.