You are at:Home»Awesome»Keeping the Throttle Down

Bill and Andrei Allen give a lot of credit to DriveGuardian for keeping their drive intact for the entire 2017 season.

In April, Marine Design Corp. shipped its 100th DriveGuardian, the drive protection component that got the ball rolling for Mike Clesceri and his team. Also in April, Clesceri left his ”day job” to focus all of his efforts on MDC, which features an expanding line of products, including the well-received DriveSync, a TrimSync, a Bravo Output Shaft, a Shift Control for SCS Crashboxes, an in-development patented self-regulating water pickup and more.

Not only has Clesceri sold, advised, helped install and built a reputation for great customer service with his “smart” products like the DriveGuardian—the patented torque-limiting clutch designed to eliminate the torque spikes that occur when a boat hits a wave, catches air and the propellers re-enter the water—he’s also hit the pavement attending events in Missouri’s Lake of the Ozarks, Florida’s Key West and a plethora of offshore racing locations around the country.

Along with churning out product and keeping boaters happier with their on-water experiences, MDC’s 2017 success lies in achieving tangible results—the racing world championships and the class victories at the popular Lake of the Ozarks Shootout in Central Missouri. 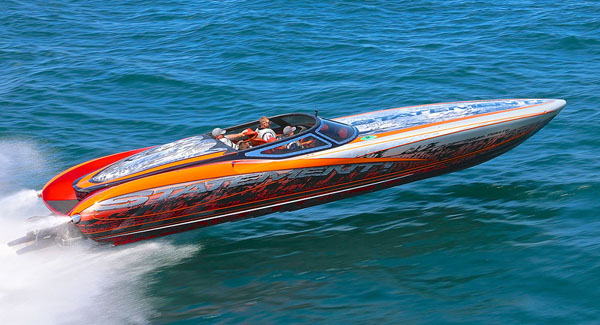 The owner of this impressively updated 42-foot V-bottom from Statement Marine, Michigan’s Travis McDougall said he’ll never own another performance boat without DriveSync.

“We’ve had a great year, which I’m hoping leads into 2018 being a ‘take-off’ year for us,” Clesceri said. “Our event schedule isn’t completely confirmed yet, but in addition to supporting our offshore race teams, we will definitely be in the CP Performance booth for the Miami International Boat Show, and we’ll be at Lake of the Ozarks and Key West. We are working on plans to be at another four to six events depending on scheduling.” 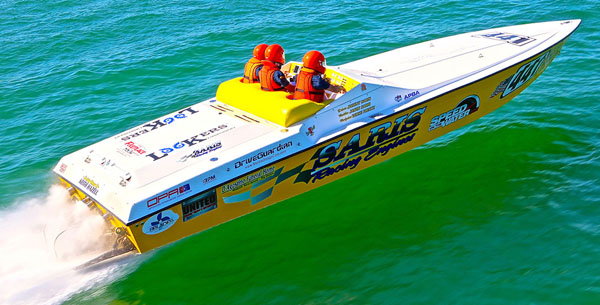 The father-and-son Saris Racing Team, which runs a 32-foot Cobra with a 650-hp engine from Saris Racing Engines, has been a proponent of DriveGuardian for several years.

Clesceri said his drive synchronization system for twin- and triple-engine boats has been a major factor in the growth of MDC. In fact, the company now offers DriveSync in Sport and Race editions, which allow for two easily programmable presets that the operator can activate with the push of a button.

The Sport edition offers a unique safety feature. With the incorporation of a GPS receiver, the system can be programmed to return the drives to a preset, and safe, trim level when a boat exceeds a predetermined speed. In essence, the system allows drivers to focus on driving and reduces the risk of being over trimmed at high speeds. Optionally, the system can deactivate the trim “up” buttons to prevent any accidental movement of the drives that could cause an issue at high speeds. The two preset recall buttons remain active so the operator can move the drives within the programmed window.

“DriveSync has worked amazing on my Statement—I think every boat should come with it,” said Travis McDougall, who recently purchased a 44-foot Mystic Powerboats catamaran that is going to be updated this winter at Boat Customs in Michigan (his 42 Ultimate from Statement is currently for sale). “I was surprised how affordable the product was and how user-friendly it is. We’re redoing the interior and the paint on the Mystic and upgrading the power from 700s to 1100s so I ordered DriveSync to go with the boat. I’ve also had some friends order DriveSync after seeing it on the Statement.”

Offshore racer Bill Allen, who earned the Super Boat International Manufacturer P4 world championship earlier this month, said he heard about DriveGuardian from his engine builder—ATECO Engine and Dyno Shop in Illinois—and some friends and decided to give it a try on the team’s 30-foot Phantom.

“I used DriveGuardian on my boat this whole season as well as three races in 2016 and I haven’t even touched it,” said Allen who won all three races in Key West with his son, Andrei, by his side. “It’s definitely been a great value since we haven’t had to rebuild our drive. Mike and his company have been a pleasure to work with. We haven’t had to call him for any issues because it’s a great product, but he’s always been accessible if we’ve had any questions. And he always stops by to check on us at the races.”

From Skater Powerboats owners Travis Reed and Sam Tippens to Kenny Mungle of Team Gone Again fame and Kenny Adams, crew chief for the world champion Instigator/AMH Construction team, the list of satisfied customers goes on. There’s just not enough room to include them in this column so keep an eye out for future stories highlighting MDC products.