You are at:Home»Awesome»Life-Altering Boat Rides

The Stevenson family from Arizona have touched many military members’ lives with rides in Mamba, their 51-foot Outerlimits, and their DCB M35 Widebody catamaran. (Photo courtesy Karen Gill.)

With a new title sponsor—Spectre Powerboats—behind the event, the Desert Storm Poker Run kicks off a week from today (Wednesday, April 27) with the fifth annual Krusin’ for Kids day co-hosted by Lake Racer LLC and Teague Custom Marine.

Taking place at the London Bridge Resort from 9 a.m. to 4 p.m., the special day doesn’t conclude after dozens of volunteers provide opportunities for kids and others with disabilities to ride in a performance boat. The charitable element continues that evening with silent and live auctions to benefit a couple of local non-profit organizations—New Horizons Center and Milemarkers Therapy—during the Desert Storm Open House Party at West Coast Drives.

According to a recent Teague Custom Marine blog, which includes information on how to get more involved with the rides, those who have been a part of Krusin’ for Kids over the years understand how much the children and adults warm your heart with their enthusiasm and joy.

Not to take anything away from the generosity of those who volunteer for Krusin’ for Kids, but I’d be remiss if I didn’t call attention to a newcomer to the poker run scene who is going to take a wounded warrior in his boat for Friday’s poker run and the kindhearted Lake Havasu local who has coordinated the military rides for Desert Storm for more than a decade. 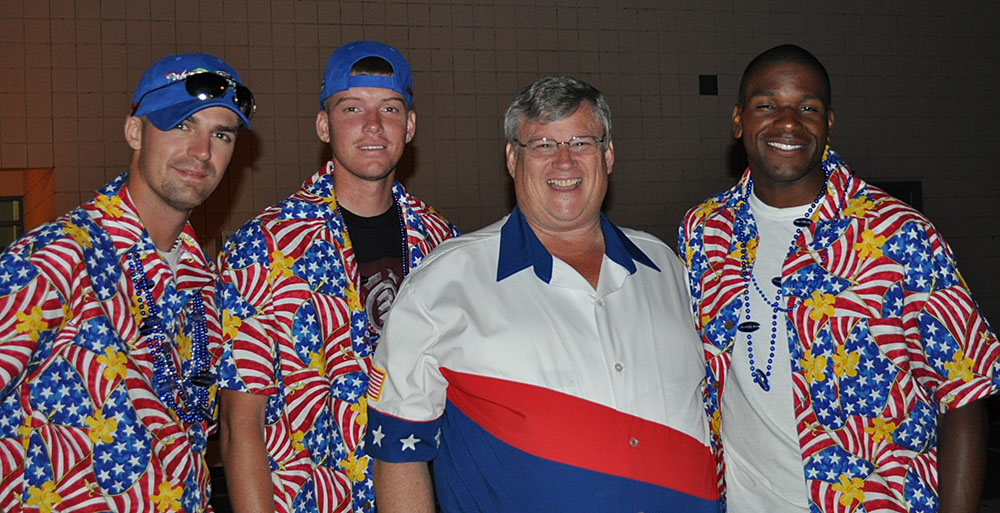 Jim Nichols, one of the founders of the Desert Storm Poker Run, always enjoys meeting and thanking the military members who participate in the poker run year in and year out. (Photo courtesy Karen Gill.)

“I can’t put into words how rewarding this experience has been over the years,” said Karen Gill, who got involved with the poker run through a military care package organization she established more than 12 years ago called Treats for Troops when her son, Retired Sgt. David Gill, was serving overseas. “I believe that our veterans need to know that we support them and care for them and love them—that’s my goal and there’s no better feeling than helping those who served this country. Seeing the smiles on their faces when they get to be a part of the poker run makes it well worth the effort.”

This year, Gill has recruited eight wounded veterans—she usually brings in active-duty military—to come to town for an eight-day adventure that includes participating in the Desert Storm festivities, fishing, target-shooting and more. She’s currently looking for participants willing to host a guest aboard their boats for the poker run, and said if anyone is interested they can email event organizer Jim Nichols at [email protected] or volunteer next week in person.

At least one veteran will be in good hands with decorated and retired U.S. Navy officer Josh Lamirato of Buckeye, Ariz., who specialized in air traffic control. Lamirato, who owns Never Forget, a 1997 Baja Marine 36 Outlaw powered by twin 1,150-hp Potter Performance engines, raced offshore for a year in 2009 and is hoping to get more involved in the sport recreationally after three tours overseas.

“I’m really looking forward to my first poker run,” said Lamirato, who currently attends Embry-Riddle Aeronautical University in Prescott, Ariz. “I always try to help out wherever I can, and since I’m a veteran and have the opportunity to share this experience with fellow veterans, I wanted to do my part.”

Thanks to passionate and generous people like Gill and Lamirato, there’s no doubt the wounded warriors coming to Desert Storm are going to be treated to one of the greatest days of their lives—as are the children who get to enjoy the Krusin’ for Kids rides earlier in the week.