You are at:Home»Awesome»Shootout Mode Activated

A couple of hours after I got off the phone with Christy Janssen on Tuesday, I walked to my mailbox and folded up inside it was the hefty 258-page program guide for the 2018 Lake of the Ozarks Shootout presented by Performance Boat Center. Although I asked a majority of the questions during my interview with the new executive director of the popular Central Missouri event that is celebrating is 30th anniversary next month, she asked me if I had received a copy of the new program, which is produced by Showcase Publishing. 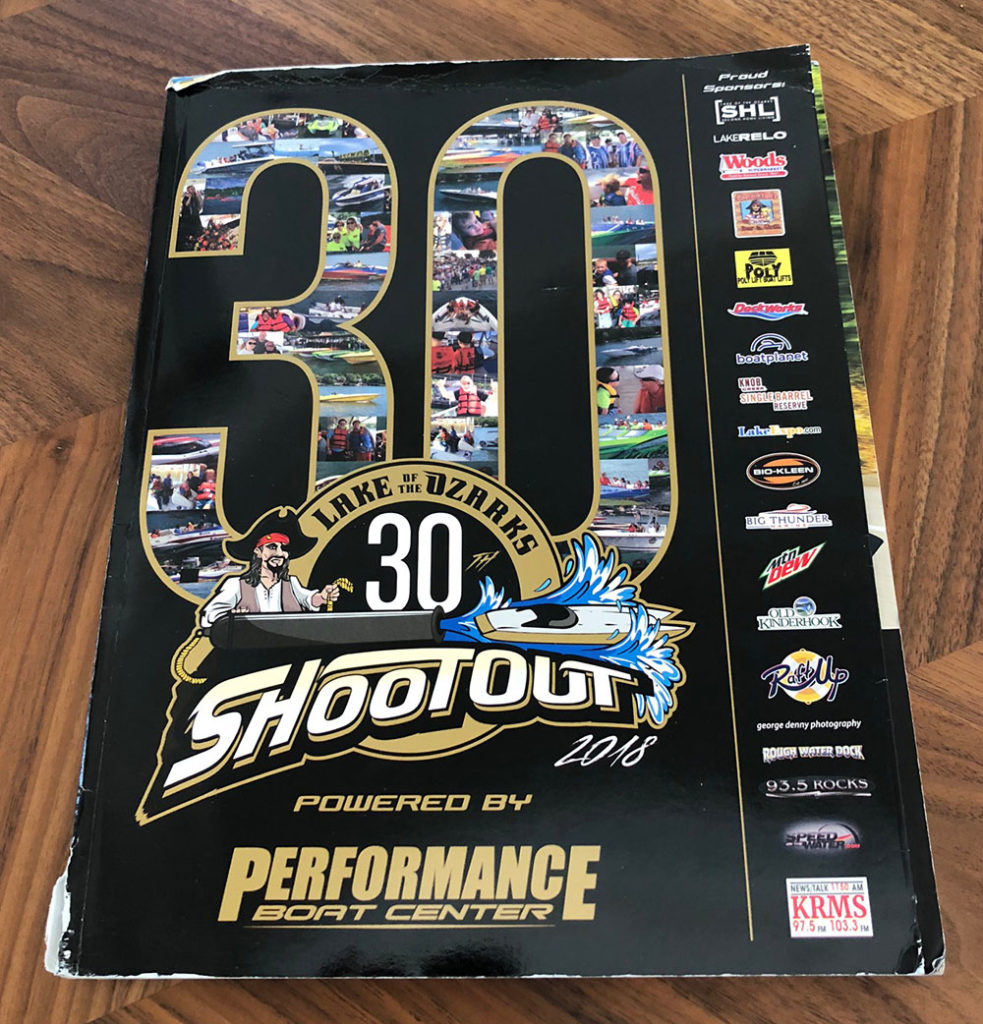 The program for this year’s 30th annual Lake of the Ozarks Shootout is a whopping 258 pages. Photo by Jason Johnson.

I had to answer “no,” which was too bad, because I would have definitely complimented her (and the whole production and advertising team involved in the book) on how well the latest program turned out. It had nothing to do with my three stories in the issue, but more to do with the wide-ranging coverage of the week-plus-long event and the tremendous amount of advertising support included.

What you may not know is that more advertising in the program means more money raised for the 30 charities and eight fire departments that benefit from the Lake of the Ozarks Shootout. And that, according to Janssen, is the main reason she was became the event’s first full-time employee back in November. 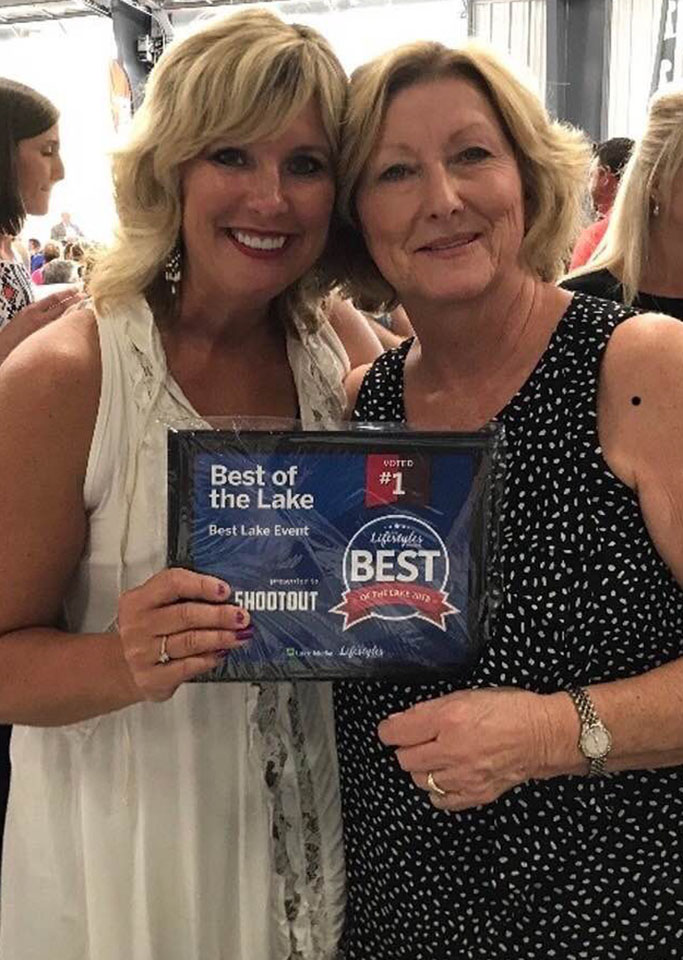 Christy Janssen, executive director of the Lake of the Ozarks Shootout, poses for a picture with Mary Montgomery after receiving an award for Best Lake Event. Photo courtesy Christy Janssen.

Although the two-day top-speed portion of the Shootout is a month away, this weekend is a big one for Janssen and the rest of the Shootout organizing committee as they are giving away a golf cart they’ve been selling raffle tickets for on Sunday (July 29) during the Mardi Gras Party at Shady Gators and launching a new line of women’s apparel called Shootout Gal, which Janssen is particularly excited about.

“I’m a little nervous about the Shootout Gal line we’re coming out with, but I think it’s going to be well received,” Janssen said. “Everything we’ve been doing this year from the golf cart raffle to the Shootout Gal line to the fishing tournament we have planned for October, is all about raising money children and families in need.”

Janssen said her primary goals this year were to learn as much as she could about the longstanding event that attracts boaters from all across the country and raise as much money as possible for charity.

“I tried to figure out where we could make more money, build better relationships and explain to people how the money raised is used throughout the community,” said Janssen, who pointed out that the event is selling a 30th anniversary beach towel online that was sponsored by Advantage Marine and Captain Ron’s Bar and Grill with special images from throughout the years courtesy of Shootout Hall of Fame photographer George Denny. “Letting people know how important the money we raise is and how close to home all of it is has been the front focus for me. We’ve also been trying to build new events to raise even more money. Fortunately I’ve been able to tailor sponsor packages to raise even more money by having co-sponsors. For example, this year’s poker run is sponsored by Poly Lift Boat Lifts, as it has been for many years, as well as LakeExpo.com, which does such a great job promoting the Shootout.” 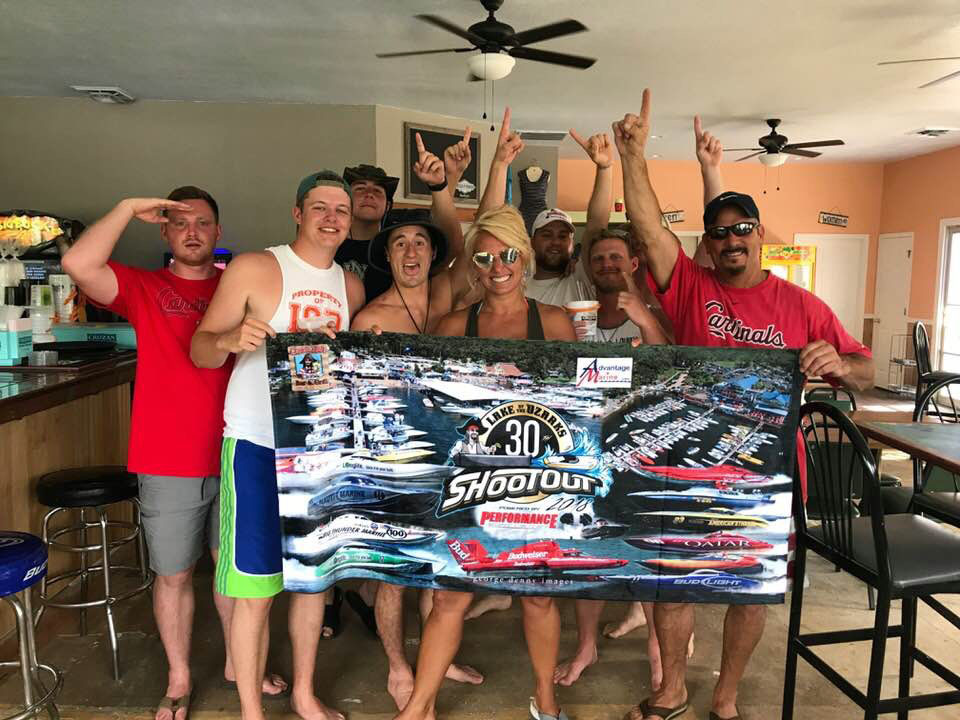 This group from Missouri was excited to get one of the first 30th anniversary Lake of the Ozarks Shootout beach towels. Photo courtesy Christy Janssen.

According to Janssen, event participation—whether you’re doing the poker run, running in the Shootout, donating money at the Saturday night auction during Super Cat Fest at Camden on the Lake or bringing your “little” boat to the Lil Boat & Pontoon Poker Run being held this year a couple of weeks later on September 8—is essential to the fundraising efforts as well. She encourages everyone to sign up for events ahead of time.

Janssen, who said her favorite part of the Shootout is probably the Wish On a Ride day for kids and families with disabilities, added that there is still some dock space available at Captain Ron’s for Saturday and Sunday’s top-speed showcase, which features boats of all shapes and sizes competing on a three-quarter-mile course.

“I’m looking forward to everything that has to do with the Shootout—it’s the 30th anniversary so we’re trying to make all of it a little more special than before,” Janssen said. “We’re trying to offer a something for all of the different people that come to the lake.”

For continuous updates on who and what boats are coming, along with other events taking place during the Shootout, check out the evolving complete coverage page on speedonthewater.com.