You are at:Home»Community»A Passion For Jacksonville

What do all single-event organizers in the powerboating world have in common? First, day jobs—all of them work at something other than organizing to pay the bills. Second, relentless passion for the events they organize. Without that level of devotion, those events never happen in the first place, much less survive through the years.

Take Greg Harris, for example, the guy behind the Jacksonville River Rally And Fun Run set for June 21-23 this year in the Northern Florida City. A successful residential real estate agent in Fort Lauderdale, Fla., Harris has plenty—in addition to serving as a moderator on the offshoreonly.com message boards—to keep him busy. Working long days and weekends comes with the territory of selling big-buck properties on the Florida coast. From showing homes to closing deals, it’s a high-touch business.

But since January, Harris has gradually ramped up his work on the Jacksonville run, an event he came to love as a participant when it was run by Bill Pyburn, Sr., a retired firefighter whose same-named son is among the best-known members of the national high-performance powerboating community. When Bill Pyburn, Sr., decided that organizing the event had become too much work—the man is retired, after all—a few years ago, Harris stepped up.

That he’s been able to turn to Yvonne Aleman, his longtime girlfriend who drives Mad Props, Harris’ 32-foot Skater catamaran (with its owner on the boat’s throttles) for help is huge. A certified public accountant and successful businesswoman, Aleman is beyond competent—she’s a force of nature. 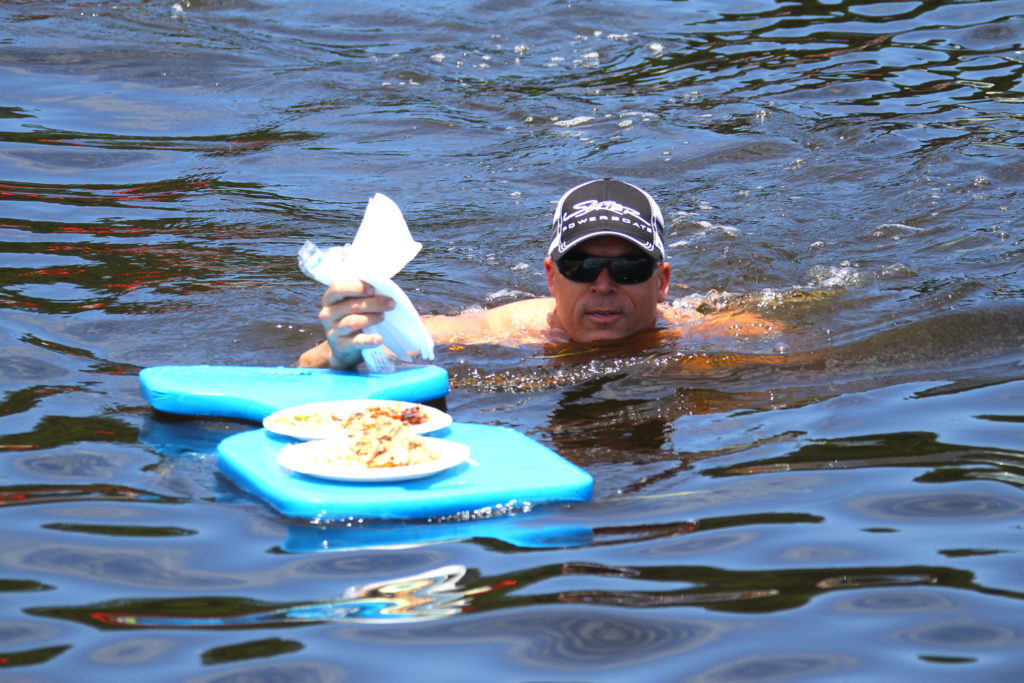 With the organizational chores behind him, Harris is able to relax and enjoy himself during the event. Photo by Yvonne Aleman.

Still, the majority of organizational work, which will ramp up as the event approaches, rests on Harris’ shoulders. And the workload is significant.

So why does he bother?

“Because I always felt like family there,” said Harris. “And because as the grandson and brother of firefighters, the Camp Amigo cause is close to my heart.”

Given the firemen in his family, Harris’ devotion to supporting Camp Amigo—a weeklong, rotating-location summer camp in Northern Florida for children recovering from the physical and emotional tolls of severe burn injuries—through the Jacksonville River Rally And Fun Run, makes perfect sense. Last year, the event raised $11,000 for the nonprofit organization. This year, Harris is shooting for $15,000.

“We are expecting 40-plus boats this year, including the VOODOO, Dirty Money and Aftermath Skaters, as well as a surprise MTI cat or two,” he said. “Bill Pyburn, Sr., is still my local contact guy—he’s my ‘boots on the ground,’ so to speak, since I’m not local to Jacksonville. He previews everything to make sure it ‘works.’”

But the high point for Harris is personally presenting the donation raised by the event he spearheads to the staff and their charges at Camp Amigo.

And it’s also the part that will keep Harris coming back to organize the run for years to come.