You are at:Home»Community»Girl Power On The Water 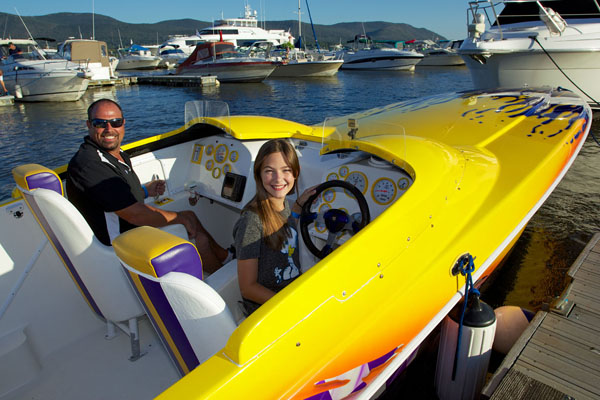 In the single-engine go-fast V-bottom world, models don’t get much more significant than a 2001 Superboat 30 YTK with a supercharged 850-hp Richie Zul powerplant. As a longtime powerboat owner who lives in Ringwood, N.J., Kendall Todd knows that. That’s why he’s taken his time teaching his 13-year-old daughter Amanda to drive the 30-footer he bought in 2004. She started on her father’s lap when she was five years old. By the time she was 10 years old, she could handle the boat herself.

Of course, Amanda can handle more than the boat—she can handle herself. At age nine she earned her black belt in karate.

Last weekend, she drove the V-bottom in her first organized event, the Hudson River Fall Fun Run in New York. As always when she’s behind the wheel, the eighth grade honor student, musician and singer—she had the lead role in her middle school’s musical production of Cinderella last year—was accompanied by her 50-year-old father.

“She started off sitting on my lap,” said Kendall Todd. “Then she graduated to actually getting into the driver’s seat. She’s never scared me. She’s very cautious and very alert about what’s going on around her. She’s very aware of where she is at all times.” 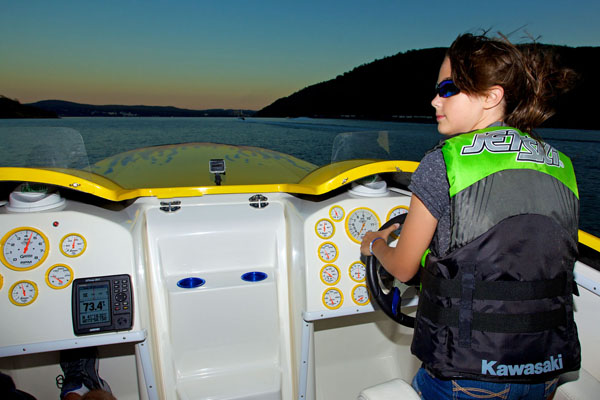 Said Amanda Todd, “I just mainly think about not crashing into anything or flipping over.”

Kendall said his daughter has 15 to 20 hours of solo time behind the wheel of the Superboat, but many more hours in the helm seat of the family’s 20-foot deck boat.

“I just mainly think about not crashing into anything or flipping over,” said Amanda. “Sometimes when I start driving I get nervous, but then I start to feel more comfortable.”

With some 50 V-bottoms and catamarans in the Hudson River event, Amanda had plenty to be aware of. But thanks to her own gradually-acquired skill set and her father’s guidance, she had no trouble maintaining her distance from other vessels. She even ran the 30-footer to 80 mph.

At this point in her high-performance powerboat-driving career, Amanda Todd actually feels more comfortable as a driver then a passenger, a fact that delights but doesn’t surprise her father.

“I just feel more confident when I’m driving,” she said. “You can feel the boat running more when you’re driving, and you’re the boss.”