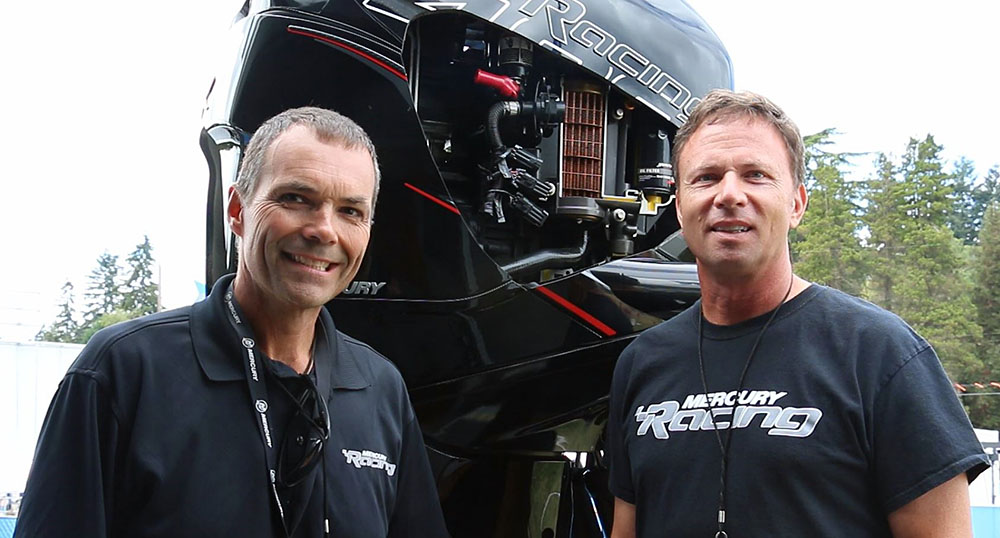 Rick Mackie (left) and Scott Reichow, two of the long-standing Mercury Racing employees behind the company’s blog, can often be found at events with the Mercury Racing Experience Truck.

When it comes to news, the rebranding of Mercury Racing’s classic 250 XS and 300 XS outboard engines isn’t likely to “move the needle,” as new outlets often say in reference to a strong story, but it’s still newsworthy—especially for a company website blog written by longtime Mercury Racing stalwart Rick Mackie.

I clicked on Mackie’s most recent blog to catch a glimpse of the new design, which Mercury says emphasizes the horsepower rating and the latest “Racing” word mark to give the engines a powerful new look. It’s definitely pretty and it fits in nicely with a style similar to the Verado lineup.

Although I immediately noticed that the OptiMax name was gone, that wasn’t part of the news. What was is that new for the 2017 program year is the adaptation of the 1.75:1 Verado 4.8 gearcase, which comes standard on 25” and 30” offshore models and is designed to withstand the rigors of a saltwater environment, making it ideal for performance center consoles. Also good to know—the 300 XS models fitted with Verado gearcases are available in right-hand and left-hand rotation.

Not every blog post Mackie writes is about new product. Some of his blogs focus on race coverage—his previous one was a nice look at the historic Cowes-Torquay-Cowes endurance race won by Steve Curtis, Richard Carr and Paul Sinclair in their classic Mercury Racing 1350-powered aluminum Cougar V-bottom—and others have included historic features, event promotion stories and even service, advice or project pieces.

One thing’s for sure, I enjoy reading the professionally done posts, most of which are written every two to three weeks by Mackie, the main contact I’ve dealt with in the Mercury Racing marketing department since the day I started at Powerboat magazine a dozen years ago. Scott Reichow, Mercury’s performance propeller manager, also writes some of the blogs and does an excellent job. The Mercury mainstay—Reichow has been with the company for 28 years—is a walking encyclopedia for props of all shapes and sizes for all types of boats.

Mackie, who also has been with the Fond du Lac, Wis., company for 28 years as of September, is a driving force behind much of Mercury Racing’s brand awareness in terms of event sponsorship and/or attendance, boat show particulars, informative press releases and other catchy marketing ideas and merchandise. 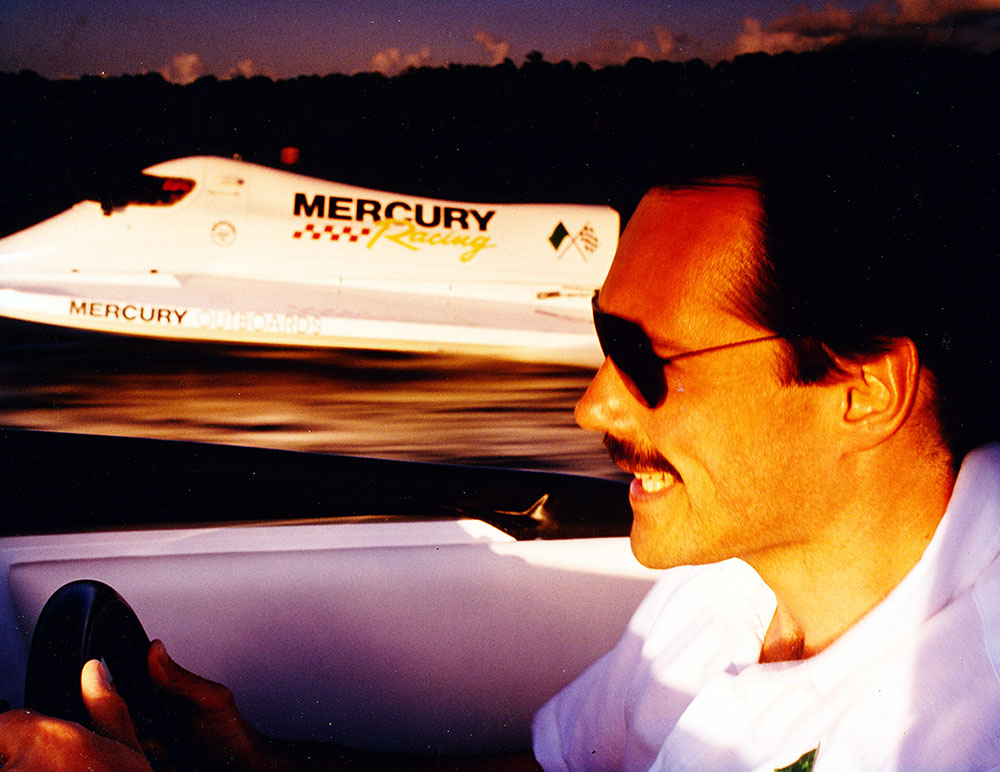 With Mercury’s Seebold tunnel boat as the subject, Rick Mackie runs a 24-foot Skater with a Pro Max 225X Offshore on Lake X during a photo shoot for the company’s 1996 outboard catalog.

He also manages the “Mercury Racing Experience Truck” Matt Trulio wrote about more than a month ago in his Road Warrior column, and, if by any chance you’re looking for something history related within the company, which was founded by the legendary Carl Kiekhaefer, Mackie, who started his career in product support for the Mercury tunnel boat racing program, is a tremendous resource.

In Trulio’s story on the mobile marketing machine that has made stops in Lake Havasu City, Ariz., Lake of the Ozarks, Mo., and Buford, Ga., to name a few, Mackie said, “I’ve always believed the branded vehicle rolling down the road provides immeasurable brand exposure. Even with our digital age, you cannot replace being face to face with customers, fans and potential prospects. Over the years, I’ve met Mercury’s most important dealers, boat builders and key customers first in the field. You can’t replace relationships.”