For Stu Jones, president of the Florida Powerboat Club, the 2019 season-opening Winter Poker Run from Miami to Hawks Cay Resort & Marina in Duck Key was as memorable as any of the club’s 26 previous kick-off events. That’s because he got to debut the “Project 1080” Cigarette Racing Team 38-foot V-bottom that was repowered with twin Mercury Racing 540 engines, amongst other things, in a rather intimate poker run setting with 20 club members who brought an impressive array of performance boats on the run last Friday. 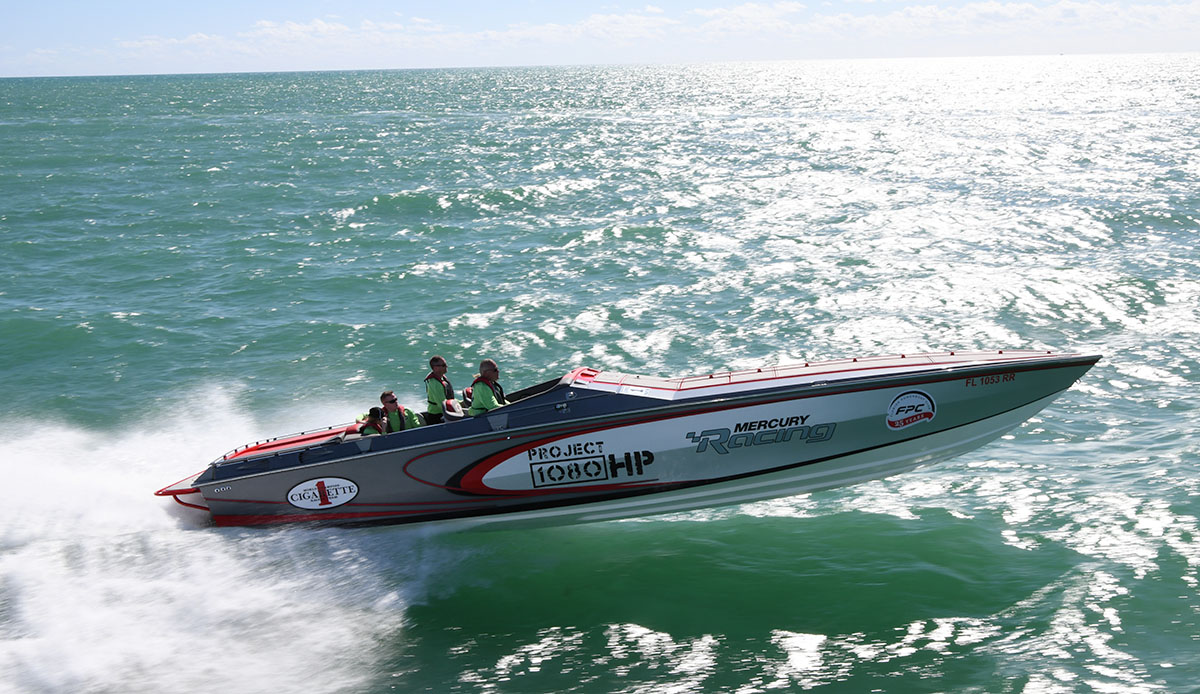 “My boat ran great—we have some dialing in to do still and plan to test some different props, but overall the engines felt great and provided plenty of power,” Jones said on Tuesday en route to Destin, Fla., for meetings regarding the club’s mid-August Emerald Coast Powerboat Poker Run and the more pressing late-May Orange Beach Powerboat Week, the club’s first event in Alabama and a new partnership with The Wharf at Orange Beach. “Fortunately with Performance Marine Trading owner Pat Sullivan handling things, we’re in capable hands. FJ Propeller also is on board as a sponsor so that will help us with getting different props to test.

“We went with the ITS stand-off boxes on the Bravo One XR drives, which the boat did not have before, so we need to figure out the sweet spot for the props because the Bravo propellers we have now are created extra drag being further from the transom,” he continued. “We’re going to try the Max 5 five-blades next and see how those perform. Right now the boat running is about 70 mph up top. On a good day with the right props, we might be able to see 80 mph. You know me, I’m not about top speed anyway. For me, it’s about getting around reliably and comfortably and for us to be able to use the boat to raise some money.” 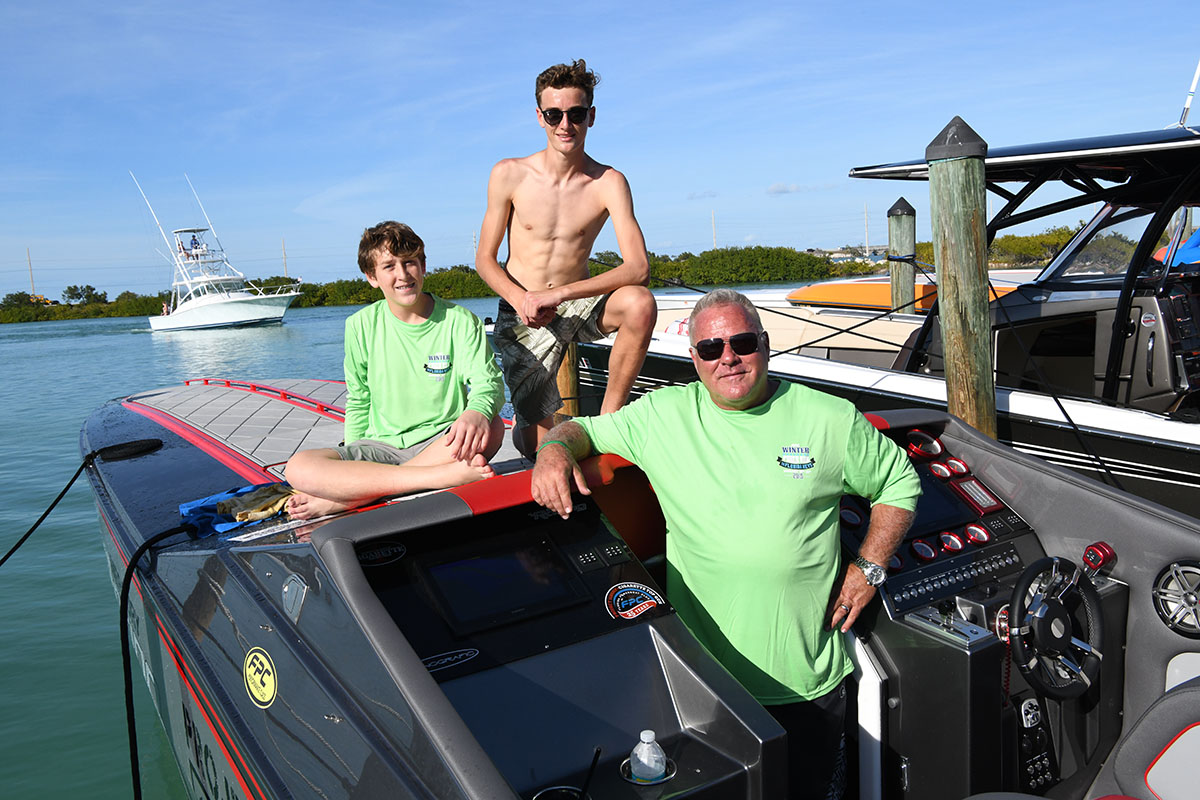 Jones said at the Winter Poker Run he raised several thousand dollars for Broward House, a not for profit social services organization that provides services for people impacted by HIV and other chronic health challenges, by providing rides to two different couples. He plans to do the same thing at events throughout the season to raise money for the various causes they support.

Not only was he ecstatic about getting Project 1080—a 2000 model-year Cigarette that was repainted by Dark Force Marine in Pompano Beach and reupholstered by Cigarette and the talented team at Fineline Marine Interiors in Hallandale Beach—on the water, Jones was pleased with the overall turnout for the run.

“We were right where I expected with 22 boats registered,” he said. “That was a good number for this run and for the facility. The conditions were great for boating, especially heading to the Keys for the first leg on Friday. I was most impressed by the mix of boats we had on hand. I’d say close to half of the boats were center consoles. We had a couple of Nor-Techs, a couple of Mystics, a 44-foot Concept and even a new 36-foot Glasstream.

“There were probably five or six outboard-powered sport cats; we had Ron Szolack’s new 38-foot Mystic, Johnny O’Loughlin’s 34-foot MTI and a couple of 36-foot Wright Performance models, including a new white one owned by New York’s Matt Borcina,” he continued. “We also had some offshore catamarans—including the eventual poker run winner, Barry Henson in his 43-foot Nor-Tech, which unfortunately broke in Key Largo on the first day— and performance V-bottoms from Cigarette, Donzi, Hustler, Sunsation and even Phantom. Yep Phantom, one of the coolest boats was George Auriemma’s new canopied raceboat—that thing runs really nice.”

Jones said the landmark host resort has been undergoing post-hurricane renovations and that while most things were in great condition, the dock situation was not quite up to par.

“Luckily, since we didn’t have a large group, we made it work,” said Jones, who was the topic of a recent OffshoreOnly.com written by Matt Trulio (Mr. Jones’ Most Excellent Ongoing Adventure). “All in all, it was a good start to the year. We had a great group of people and everyone seemed to have fun.” 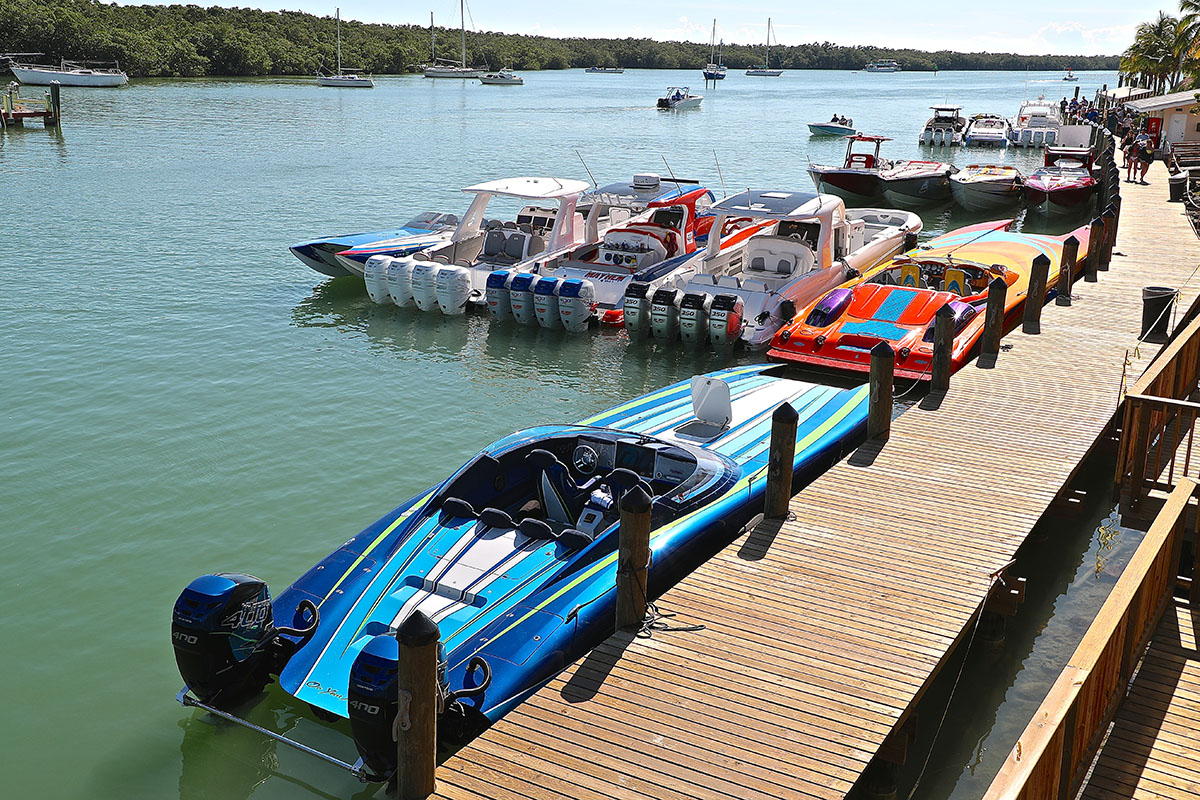 The boats in the FPC season opener stopped for lunch at Gilbert’s in Key Largo.

While Jones is currently working on events that are in May and August, he and the FPC are also busy planning the Miami Boat Show Poker Run and a showcase event he has planned for Project 1080, the Friday before the Miami International Boat Show begins. He said the details aren’t officially complete but that there is a Project 1080 kick-off reception for media, sponsors, etc., that is going to feature a christening of the Cigarette, set for Friday, Feb. 8 at Haulover Marine Center in North Miami.

“We’re hoping to drum up a little pre-boat show hype with the Project 1080 party at Haulover,” Jones added. “It’s going to be a great year—I can already tell.”