You are at:Home»Racing»Ride Of A Lifetime

Even a casual offshore racing fan would never think of calling Gary Ballough a “rookie.” After all, the Stock-class veteran throttleman has 12 National Championships and 12 World Championships—not to mention 107 wins in a career that has spanned most of his adult life—under his belt. In 2012, Ballough and teammate Omar Danial took second place in the Union Internationale Motonautique’s X-Cat class, the international equivalent of Stock class in the United States.

And yet last weekend, Ballough was every bit the wide-eyed rookie. That’s because he got the nod to share the cockpit of the Abu Dhabi team’s 48-foot Marine Technology, Inc., catamaran with throttleman Johnny Tomlinson for the UIM Class 1 races on Saturday and Sunday in Terracina, Italy.

“It was just unbelievable,” said Ballough, who remains in a moderate to heavy state of euphoria since he returned home yesterday. “First of all, I’ve never driven one of those boats. My biggest concern was not disappointing the Abu Dhabi team or [MTI company owner] Randy Scism or Johnny—people I really look up to. I didn’t know if was I capable. They were nice enough to ease me into it a bit.”

Ballough couldn’t have been in better hands with his American teammate in the cockpit. Tomlinson throttled his way to a UIM Class 1 World Championship in 1997 with driver Laith Pharaon in the Jolly Motor Tencara catamaran—the year before, Tomlinson and Pharaon went undefeated to take the National and World American Power Boat Association title in the Zero Defect Skater cat. Tomlinson also throttled for the Abu Dhabi team in 2010 and—for one race—in 2011.

“Gary said the more I talked to him when we were in the boat, the more comfortable he’d be, so I talked him through it,” said Tomlinson. “He did a great job. He has a lot of racing experience and we were very comfortable together.” 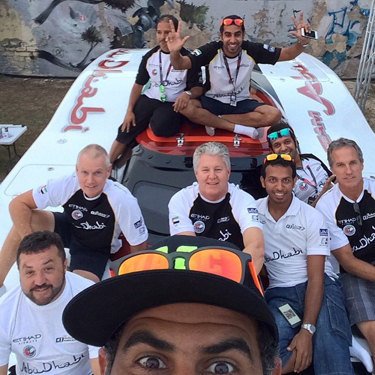 Welcome to offshore racing’s version of the “United Nations”—the Abu Dhabi team strikes a selfie pose with (from left) Ballough, Scism and Tomlinson.

Last Thursday and Friday were test days in Terracina, and Tomlinson and Ballough made the most of them. Friday’s laps were timed, and the team saw steady improvement as the driver and throttleman got used to working together. In fact, from their first timed lap to their last they were able to shave off 12 seconds.

Each UIM Class 1 event has a qualifying event for starting position before the actual race. On Saturday, the American cockpit duo in the Abu Dhabi cat qualified third—roughly four seconds behind the pole-position winner—and finished third in the race. The result exceeded all expectations. Tomlinson and Ballough headed into Sunday’s race pleased, though far from overconfident, with their performance.

Per UIM Class 1 rules, the Abu Dhabi team fueled 48-foot cat powered by twin 850-hp engines after Saturday’s race—Class 1 teams are not allowed to fuel their boats on Sunday. They carefully calculated exactly how much fuel they would need for practice, qualifying and the 40-minute race. (UIM Class 1 races run for 40 minutes before the white flag comes out, indicating there are three minutes left before the checkered flag drops.)

Sunday found the Abu Dhabi team once again qualifying third, another confidence-builder for Tomlinson and Ballough. They worked their way into second place behind the Victory team, and heading into the final lap it look as though they would hold their position. By any measure, third- and second-place finishes in a UIM Class 1 by cockpit duo teaming up for the first time would be a significant achievement.

But it wasn’t to be. Tomlinson and Ballough ran out of fuel on the final turn of the last lap.

Neither Tomlinson nor Ballough let Sunday’s result get them down. In fact, both are looking forward to the next UIM Class 1 race in Abu Dhabi, which gives the team something akin to “home field advantage,” Dec. 3-5. Between now and then, Ballough will race with SOS Venezuela team owner/driver Chris Schoenbohm in Stock class at the Super Boat International Key West Offshore World Championships in November. Tomlinson might also be racing in the SBI season finale—he’s still awaiting final confirmation on a possible throttling gig.

Tomlinson said he’s looking forward to getting back in the boat in Abu Dhabi. As for the Class 1 “rookie” Ballough, he’s still walking on air.

“What was no big deal to Johnny was the biggest deal of my professional career,” he said. “It was a huge difference from doing absolutely everything for my own team to having everything the boat needed—and we needed—tended to by a professional team. There were guys putting on my seat belts, making sure my radio worked—I was just shaking my head the whole time. I have never been around anything that professional.

“I had the opportunity to be part of the pinnacle of the sport, and I am just so grateful and thankful to Randy and Johnny and the Abu Dhabi team,” he added. “I still can’t believe that this happened in my lifetime.”