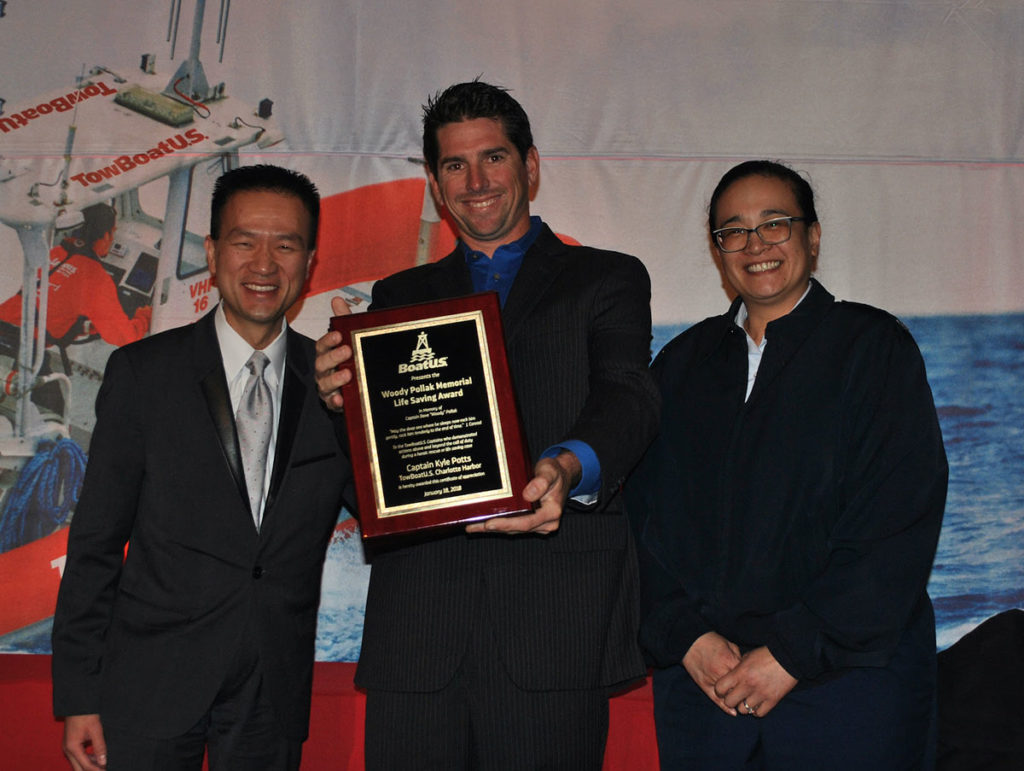 If there’s one thing I don’t write enough of, it’s articles related to safety. Whether it’s safety advice, equipment, skills, reminders, etc., I’m going to make a concerted effort to produce some more safety-oriented articles this year starting with a positive one about life-saving rescues.

Recently 10 boat-towing captains who acted quickly to save lives last year were honored by their peers at a ceremony held at the annual BoatUS Towing Conference in Jupiter, Fla., on January 18. The event recognized the captains from TowBoatUS towing locations in Florida, Maryland, Massachusetts and California.

Along with four Meritorious Service Awards that were presented at the conference, the annual Woody Pollack Lifesaving Award (which is named after respected towboat captain Dave “Woody” Pollack who died in 1994) was given to four captains who teamed up to rescue two young anglers after their 16-foot Carolina skiff was found capsized in the middle of Florida’s Charlotte Harbor during stormy conditions.

Although they were wearing lifejackets, the male and female boaters nearly drowned after three and a half hours in the washing machine-like swells. Thanks to the assistance of Capt. Dallas Kyle Potts, Capt. Andres Rosado, Capt. Jerry Acosta and Capt. Shane Earhart, the couple lived to tell the story about the May 24 outing in which they under-estimated the conditions. With their boat capsized, cell phone destroyed and no VHF radio, they decided to leave the boat and attempt to swim to shore miles away.

Fortunately for them, the captains on patrol had a feeling the vessel did not break away from a dock or mooring, so they put search efforts in motion to find any passengers, dispatching two more rescue boats to assist in the recovery. Finally, several miles away down current from where the boat was found, Earhart observed arms flailing in the air and he and Potts quickly pulled in a young woman, then a young man, both full of water, gasping and trying to catch their breath.

Similar stories were shared at the conference for the recipients of the four Meritorious Service Awards. 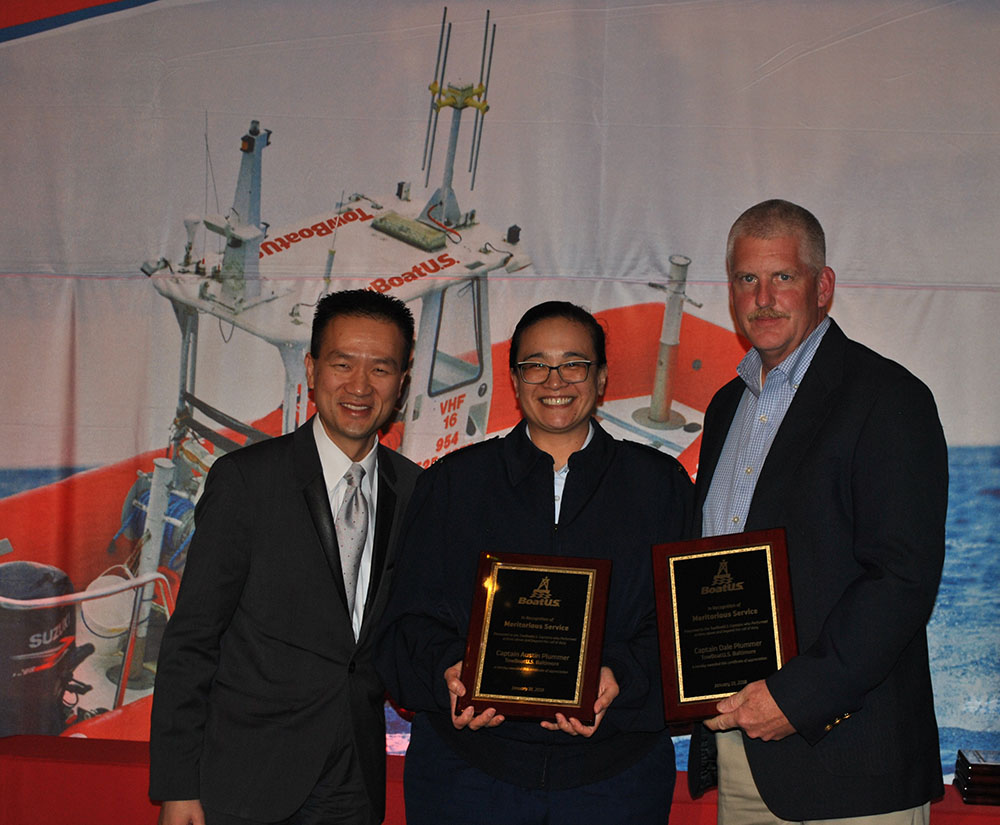 La and Davidson presented one of four Meritorious Service Awards to Capt. Dale Plummer of Maryland, who also accepted an award for his 19-year-old son, Capt. Austin Plummer, who assisted with a rescue effort in July.

In Baltimore, Md., on the Chesapeake Bay, Capt. Dale Plummer and his 19-year-old son, Capt. Austin Plummer, assisted in the rescue efforts after an unmanned 25-foot sailboat careened ashore with its sails aloft like a ghost ship on the afternoon of July 28. Around 5 p.m., with less than a few hours of daylight to spare, the Plummers volunteered to join the search in the poor conditions.

Around 7:30 p.m., near last light, the father and son spotted the boat’s owner in the water about 200 yards from the shore of North Point State Park in Baltimore County. The man said he had been in the water for roughly seven hours. He was exhausted but able to walk, and unharmed.

Capt. Nathan Lins of TowBoatUS Catalina in California halted a tow in progress to respond to an emergency call regarding a first-time sailor who, clad only in board shorts, went overboard while his boat and crew sailed on without him. Lins searched in the direction toward where the current was taking the victim but had a hard time locating him in the rough seas. As he was just about to pass the man, Lins spotted him and came in for the recovery.

In Newburyport, Mass., Capt. Sawyer Smith sprung into action on June 24 when a man fell off a marina dock and was swept away by a ripping tidal current. Observing the commotion and understanding the current runs at one to three knots and that the water temperature was in the 50s, Smith knew the man’s life was in danger so he grabbed a life ring, ran over to the next set of docks — down current of the flailing man — and dove in without hesitation. The victim had been pushed to the middle of the river, but Smith was able to swim to him and place the life ring around him. Due to the powerful current, Smith could not make the swim back, so a passing vessel went to their aid and both were safely returned to shore.

At the beginning of the year, Jan. 7 to be exact, Capt. William ‘Pat’ Davis of TowBoatUS in Stuart, Fla., rescued two 14-year-old boys who were swept away from the boat of one of the boy’s father while free diving in open choppy water. Davis found the teens about a mile away less than an hour later and brought them to safety.

Finally, in Tarpon Springs, Fla., Capt. James Freeman received a call around 4 p.m. on September 22 from BoatUS National Dispatch that a man and wife on a 26-foot powerboat was taking on water and sinking approximately seven miles offshore. Roughly eight miles from the last known position of the boat, Freeman immediately put the hammer down and headed toward the distressed vessel in stiff two- to three-foot chop. He found the sunken boat with only its bow sticking above the surface but the two occupants were nowhere to be found. After searching for a half hour, Freeman located the distressed crew in their lifejackets about a mile from where he located the boat.

Kudos to Freeman and all of the boat-towing captains who were honored for their heroic efforts in 2017.