You are at:Home»Uncategorized»Catching Up With Nolan Ferris

Nolan Ferris, a longtime performance-boat owner who lives in West Monroe, N.Y., and is a member of the 1,000 Islands Charity Poker Run organizing committee, is a bit of a sap. Strike that. He’s a gigantic sap, the kind who frequently tears up at charity, events, movies, weddings and such. He only buys shirts with sleeves large enough to wear his giant heart.

I know the type because I am the type.

In 2019, Ferris, a 43-year-old native of Syracuse, N.Y., who lives with his wife, Kim, in nearby West Monroe, worked as an auctioneer/master of ceremonies for five events. For the third consecutive year, he reprised that role at the 1,000 Islands Charity Poker Run, which raised raised an event-record $110,500 with $15,000 going to River Hospital, $60,000 for Make-A-Wish of Central New York, $10,000 for Make-A-Wish of Eastern Ontario, Canada and $20,000 for the Jewish Community Foundation-Noah’s Care Bags. (The remaining balance went to local charities including volunteer fire departments in Clayton and nearby Alexandria Bay.) 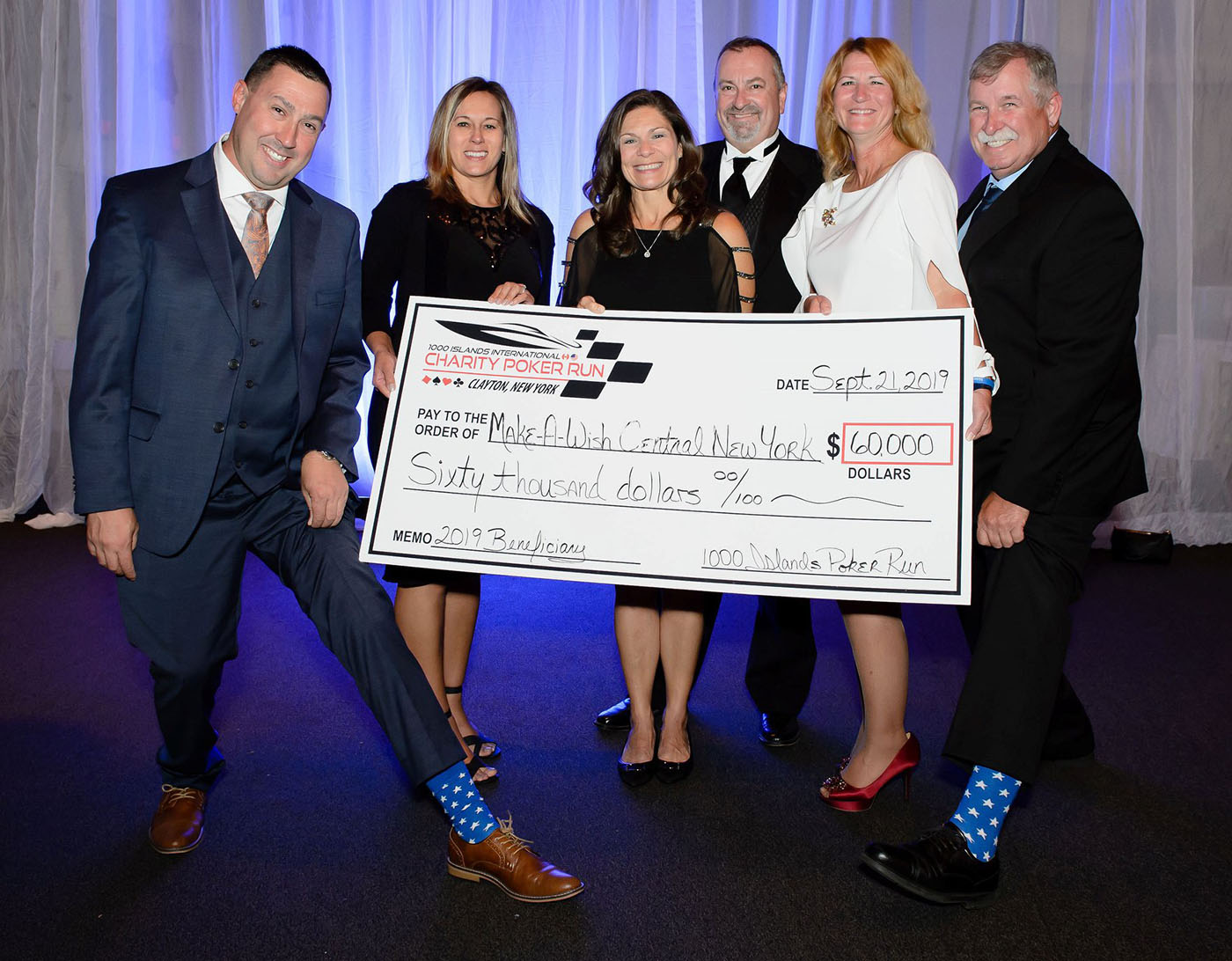 (From left) Nolan and Kim Ferris, Renee and Ken Lalonde and Courtney and Louise Rutherford presented a $60,000 to Make-A-Wish of Central New York in 2019.

During three days in August, he tackled auctioneer/MC duties again at three fundraising events during the concurrent Lake of the Ozarks Shootout and Super Cat Fest events in Central Missouri. Three months later, he auctioned off a slew of amazing items and experiences during the fourth annual Speedonthewater/Offshoreonly Key West Bash, which raised $42,500 for locally based Samuel’s House, a nonprofit organization that serves homeless women and families.

That would be a big year for any amateur auctioneer, much less one with a full-time job working for the Ski-Doo snowmobile arm of Canada-based BRP (Bombardier Recreational Products) as a dealer educator, instructional video host and product representative at various snowmobile shows and other events. But Ferris is energetic and passionate, just as he was when he organized the Swamp Run in Upstate New York from 2002 to 2011. That experience, which included working closely with the Make-A-Wish group, came in handy when his longtime friends Ken and Renee Lalonde began talking to him about helping organize the first 1,000 Islands Charity Poker Run in 2017.

“Ken said, ‘Just come to a meeting and listen,’” said Ferris. “I said, ‘OK, but make sure everyone brings thick skin because I really want to help you to understand what it will take. We had a conference call after that and I beat them up a little bit—there was pure dead silence on the other end of the phone. About 45 minutes later, they called me back and invited me to join the board.” 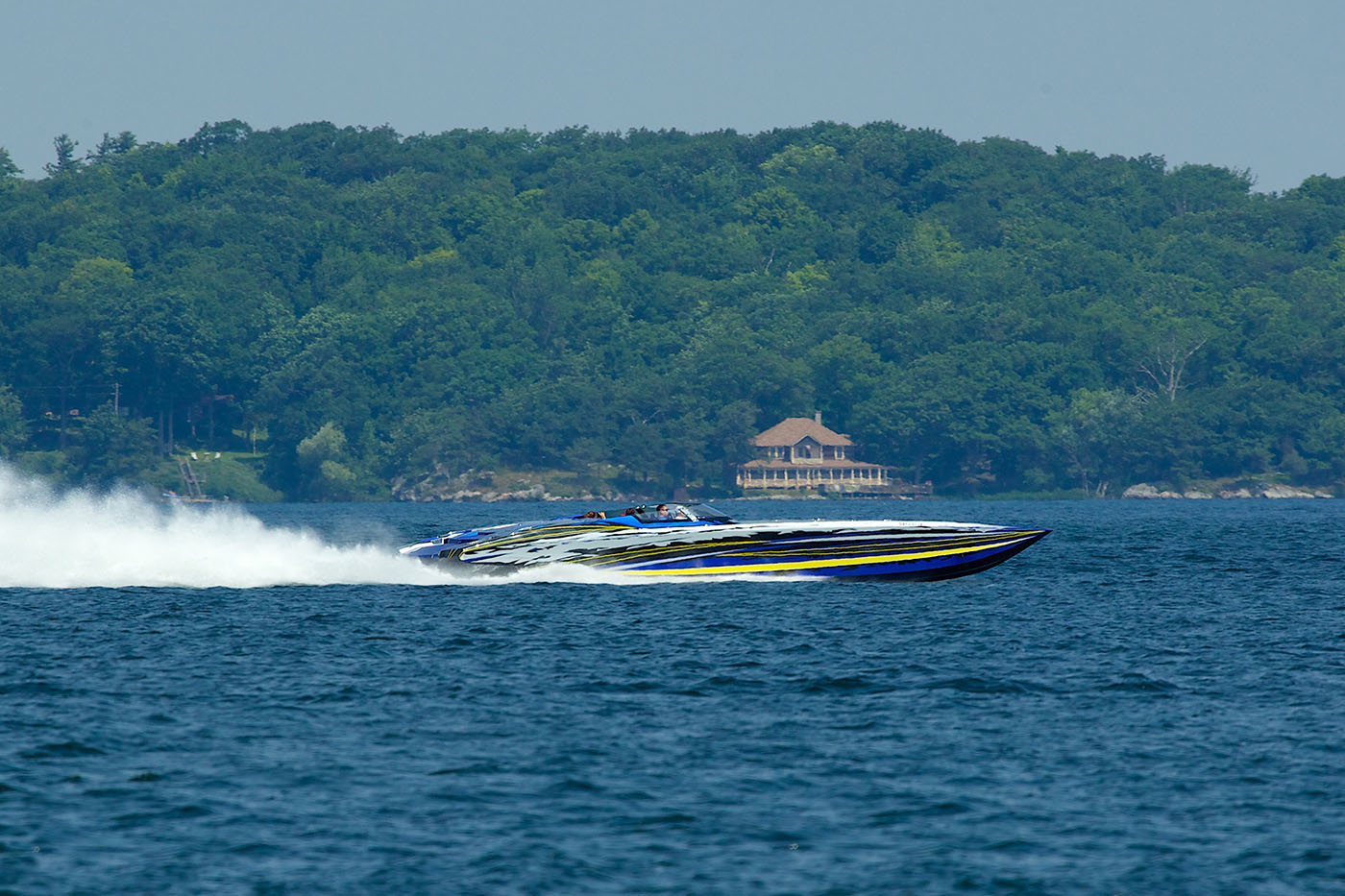 When your dear friends own a gorgeous 48-foot MTI catamaran, it’s easy to leave your own boats at the docks. Just ask Nolan Ferris. Photo from the 2019 1,000 Islands Charity Poker Run by Tim Sharkey/Sharkey Images.

Though the work involved with organizing a major boating event benefitting several charities is endless—and at times frustrating—the experience has been life-changing-and-affirming for Ferris and his fellow 1,000 Islands Charity Poker Run organizers Alexandra Buduson, Bobby Cantwell, the Lalondes and Courtney Rutherford.

“Being part of an event like the 1,000 Islands Charity Poker Runs leads to friendships and leads to knowledge you never would have had if you weren’t involved,” said Ferris. “As one of the hosts for that event, you meet so many people from so many different walks of life who have so much to offer.

“There are a lot of people out there who hear about Make-A-Wish or some other charity and think that it’s awesome,” he continued. “But when you are front and center as an organizer, it affects you. For us, walking down a dock and taking a boat ride is second nature. For a lot of people our event benefits, it’s an experience they never dreamed of.”

Ferris, who grew up boating on Oneida Lake, the Finger Lakes and Lake Ontario, owns a Fountain 35 Lightning, a Fountain 38 Tournament center console and 30-foot Sea-Ray. And because he does most of his boating with the Lalondes in their spectacular carbon-fiber 48-foot MTI catamaran, he “rarely” uses any of them.

Ferris paused for a moment. When he spoke again, his voice was soft.

“We are privileged to be organizers of the 1,000 Islands Charity Poker Run—there’s no better feeling,” he said. “What could give you more gratitude? I say to myself every day, five times a day. I will remember these experiences for the rest of my life.