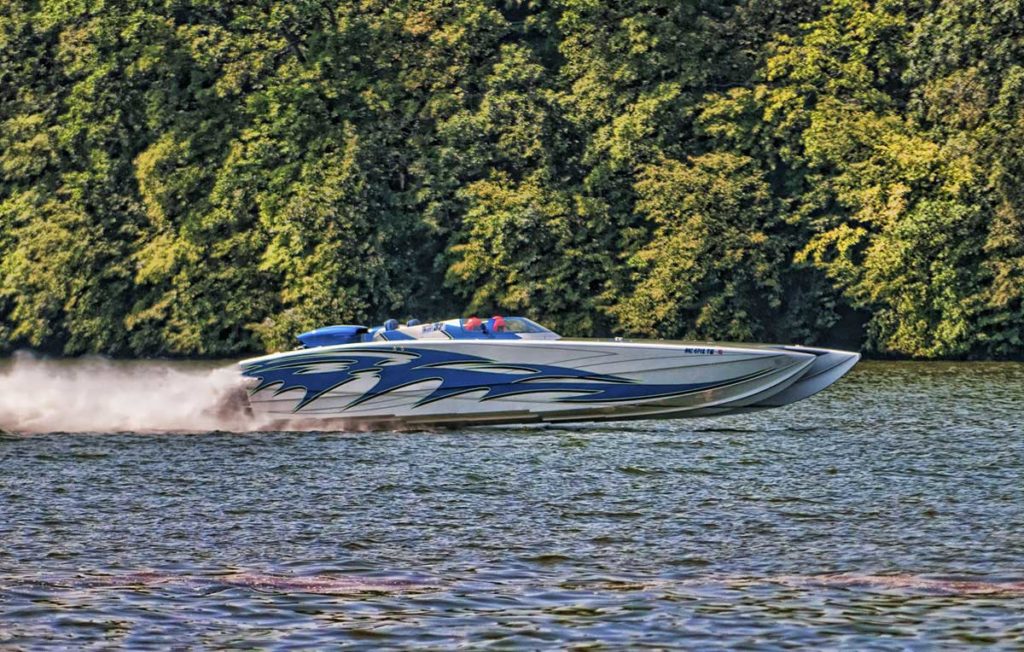 More potent versions of the same turbocharged engines that powered this 36-foot Skater catamaran to 195 mph during the 2013 Lake of the Ozarks Shootout will power Fountain’s new kilo-run V-bottom. Photo Jay Nichols/Naples Image.

Despite the fact that he’s swamped with work and “knock wood, just trying to keep from going crazy,” Mike D’Anniballe, the man behind Sterling Performance Engines in Milford, Mich., was in a particularly upbeat and chatty mood when I caught up with him by phone yesterday morning. No doubt, he was pleased to be finished with the pair of turbocharged 1,900-hp engines he built for a 40-foot Fountain V-bottom that will be used for an attempt to establish a new kilometer speed record in the near future, perhaps even later this month. But what really has D’Anniballe buzzing is the booming demand for marine engine building and rebuilding that he said has taken his business by storm.

“Racing engines, pleasure boat engines—you name it, we’re doing it and we’re doing a lot of it,” he said. “When people call now, I’m telling them immediately that turnaround time is at least seven months.

“What’s really unfortunate is that about a third of the rebuild, repair work and service we’re getting is fixing work done by other shops,” he said. “Of the few independent marine engine outfits still around, there does not seem to be many doing good work.”

In less than two weeks, D’Anniballe will head to the Miami International Boat Show. Either before or after the show, he’ll travel to Fountain Powerboats headquarters in Washington, N.C., where he’ll help Ben Robertson, Jr., dial in the powerboat’s Sterling engines.

“They’re not a lot different than the original Sterling 1700s in the 36 Skater catamaran Johnny Tomlinson ran with you and me on the Lake of the Ozarks a few years back before he and Myrick (Coil) ran it in the Shootout,” said D’Anniballe. “We did change up the valve train a bit so the engines could turn 7,400 rpm, and we also changed turbochargers awhile back.

“Everything went great with them on the dyno,” he added. “They’re solid pieces that actually produce the horsepower we say they’re going to.” 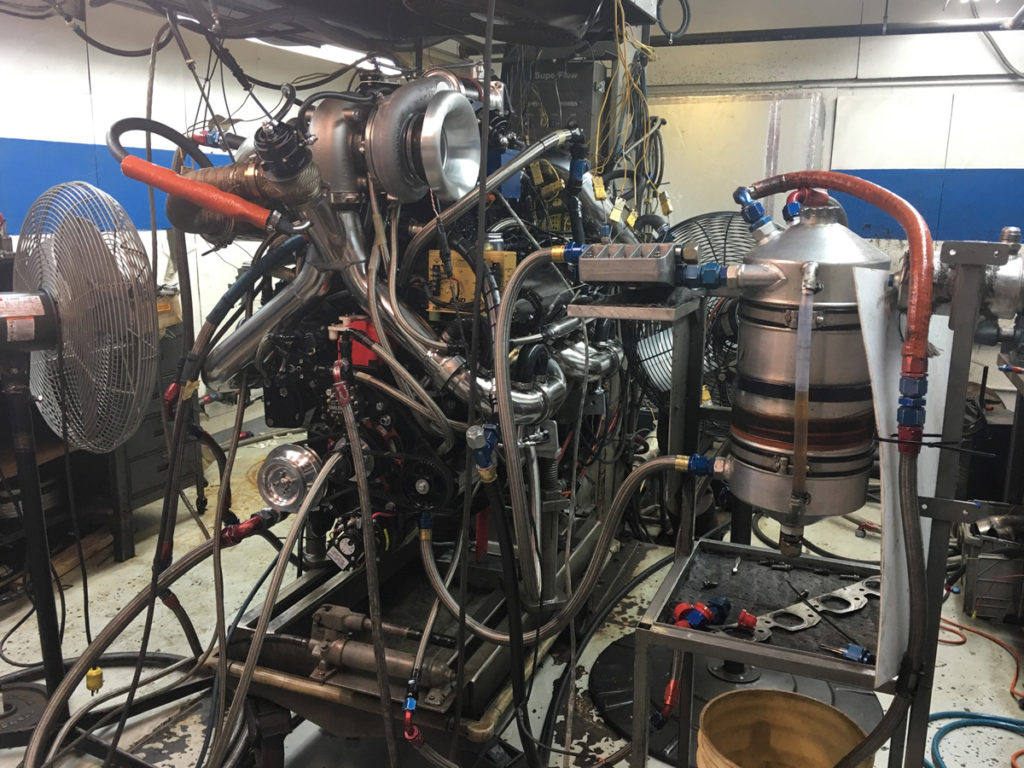 Said D’Anniballe regarding his 1900-hp engines for the Fountain kilo boat, “Everything went great with them. They’re solid pieces that actually produce the horsepower we say they’re going to.”

Once engine installation and rigging are complete, D’Anniballe will—laptop in hand—join Robertson in the boat for the early on-water dial-in process on the Pamlico River. They plan to start with the computer-controlled, fuel-injected engines de-tuned to 1,500 hp, and gradually up the power to maximum output. For any number of good reasons, not the least of which is that they only have one pair of Sterling 1900s to work with, they need to proceed cautiously and methodically in advance of the kilo record attempts.

“I’m afraid the days of having a spare set of engines for something like this are long gone,” D’Anniballe said, then chuckled.

Through social media and Internet message boards, he finds questions regarding horsepower output for the Sterling engines going into the Fountain kilo boat at once amusing and mildly irritating, especially when it comes to why the project isn’t going with “bigger power.”

“Listen, when it comes right down to it, there are a handful—and I mean a handful—of engines with this kind of power that have actually performed in verified events, from kilo runs to top speed shootouts,” he said. “The power we state is the honest power we make. When I hear claims about ‘2,500-hp’ piston engines being available, I want to know where and when they’ve even run for more than a few minutes, much less in a kilo event like this one where everyone will be watching.

“I’m looking forward to getting down to Fountain and working with Benny,” he added, then laughed again. “But between now and then, I already know I’m going to be busy.”